The global swine vaccines market size was valued at USD 1.5 billion in 2021 and is expected to expand at a CAGR of 4.9% from 2022 to 2030. Some of the key factors attributing to the growth of the market include the growing food security concerns with rising swine disease outbreaks and zoonoses coupled with the wide adoption of antibiotic-free disease preventive approaches. Some highly contagious swine diseases such as porcine reproductive and respiratory syndrome (PRRS) and swine influenza remain to be highly prevalent among swine herds of Asian, Europe, and American regions contributing to severe economic loss. Therefore, to curb the effect swine producers are widely implementing biosecurity measures and vaccination processes. 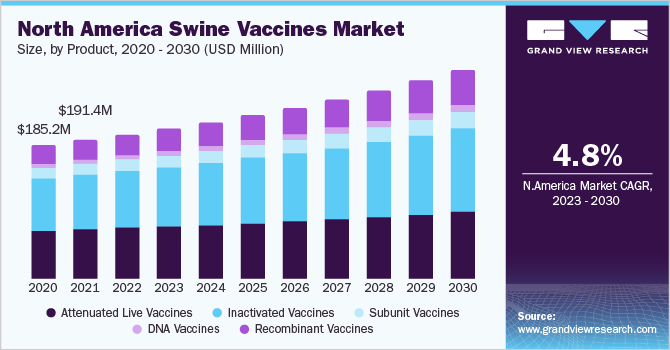 Due to the increasing number of swine disease outbreaks reported in major swine-raising countries, the customer demand for innovative, fast, safe, and effective vaccines is growing. For instance, according to the OIE, between 2016 to 2020, the Asian swine herds reported 9,928 outbreaks of African swine fever, followed by 4,721 outbreaks in Europe. Government organizations and pharmaceutical industries are continuously launching novel vaccines to combat this severe swine health concern. For instance, on June 2022, Vietnam announced that it had successfully developed the ASF vaccine which was aimed to be circulated throughout the country’s swine farms. However, the vaccine was temporarily suspended for use on August 2022, due to the vaccinated death rates.

The COVID-19 pandemic hampered the distribution of highly required swine vaccines during the initial months of the year 2020, which caused severe loss to swine producers, and swine vaccine manufacturers. This was due to the lockdowns and supply chain restrictions implemented across the world to curb the spread of covid-19 infection. The governments and healthcare sectors were focusing on handling the human emergency treatments during the crisis and simultaneously challenged to manage the rising incidence of contagious swine diseases that has been affecting the overall livestock industry. Significant measures such as import and export bans, strengthened biosecurity measures, routine surveillance & epidemiological investigations, and necessary vaccinations have been intimated to curb the spread in various regions.

Moreover, companies in the market are launching various innovative vaccine technologies and solutions, which is also enhancing market growth. For instance, in October 2019, Boehringer Ingelheim gained authorization from EMA for ReprocycParvoFLEX, the first subunit porcine parvovirus vaccine to protect swine fetuses against transplacental infection. In addition, veterinary universities are focused on delivering vaccination services to help small-scale swine farmers with disease control measures. For instance, the College of Veterinary Medicine, the University of Illinois, created a website to provide information and resources to pork producers for their biosecurity program on farms. Training farm employees and developing a biosecurity plan are essential measures for preventing high-risk pathogens from entering and affecting swine farms. These factors are further improving the growth of the market.

The inactivated vaccines segment dominated the market and accounted for the largest revenue share of 39.5% in 2021. This is attributed to its easy availability, low cost, and stability advantages over live-attenuated vaccines. They minimize the risk of virulence reversion after vaccination, as it prevents the replication process of pathogens. Moreover, it offers swine better immunization with a rapid cell-mediated immune response. Immunity obtained from inactivated vaccines can be further enhanced with adjuvants such as certain types of oils or aluminum hydroxide. However, considerable care must be taken while preparing, storing, and handling inactivated vaccines for effective results. 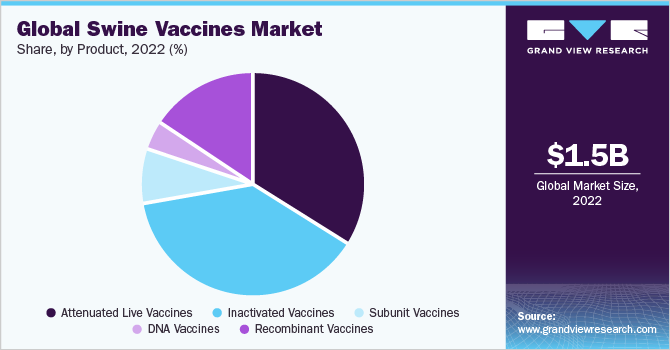 The recombinant vaccine segment is estimated to witness the fastest growth rate over the forecast period. These vaccines are anticipated to assist in achieving vaccination against numerous virus strains, as recombinants can carry several gene inserts. IngelvacCircoFLEX from Boehringer Ingelheim International GmbH is a swine recombinant vaccine that provides active immunization for pigs over 2 weeks of age. Such formulated vaccines can improve stability, increase viability, and also help avoid the need for adjuvants. Some of the recombinant vaccines available for swine are those against pseudorabies, porcine circovirus type 2, and CSF.

The PRRS (Porcine Reproductive and Respiratory Syndrome) segment dominated the market and accounted for the largest revenue share of 13.7% in 2021. This is owing to its large prevalence in major swine-raising countries. This disease exists in both endemic and epidemic forms in the U.S. and a few Asian countries. The disease has been considered an epidemic for over 30 years in the U.S. and more than 20 years in China, the leading swine industry. There is considerable heterogeneity in the viral genome due to inherent errors common in RNA transcription. Therefore, the variability of isolates is challenging to control, even within the same country.

The other types of swine diseases such as ileitis, Glasser’s disease, and neonatal diarrhea among others are anticipated to witness the fastest CAGR of 5.5% over the forecast period. The growth is attributed to its high prevalence in swine herds of developing economies. For instance, according to the CAB International organization, Glässer's disease is widespread in several Asian, European, and American countries as of 2019.Similarly, other disease outbreaks, such as erysipelas, separately occur in both acute and chronic forms or sequence, resulting in massive economic loss. There are specific vaccines available for each type of swine disease to control such outbreaks on the farms.

Asia Pacific accounted for the maximum revenue share of more than 45% in 2021 and is anticipated to register the fastest CAGR during the forecast period. Key factors contributing to this notable share include the presence of leading swine production countries such as China coupled with a large meat-consuming population and wide requirement for vaccines to curb current rising disease outbreaks among Asian swine herds. In addition, Asia had the largest pig population of 462.6 million pigs in 2021, among which China leads with around 347 million pigs. Moreover, China’s pork consumption was registered to be 43,843 thousand tonnes in 2021. 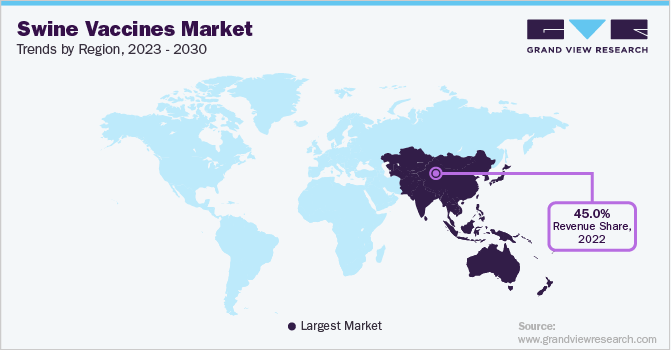 The swine vaccines market in other regions such as Latin America, North America, and Europe is expected to significantly grow over the forecast period owing to the rising swine population and wide implementation of biosecurity measures with routine vaccination. North America held a significant revenue share in 2021. The presence of a well-established veterinary healthcare infrastructure, increased demand for animal protein, highly organized farming structure, and rising expenditure on animal health is attributed to the region’s growth. Countries, such as the U.S. and Canada, have developed & well-defined healthcare systems and a high concentration of key players.

The market is highly competitive and marked by the existence of several small- and large-scale manufacturers. These players are constantly involved in strategic initiatives, such as new product launches, regional expansions, joint ventures, mergers, and acquisitions, to gain deeper market penetration. For instance, in February 2021, Algenex SL and Virbac proclaimed that they have entered an international licensing agreement for the development and commercialization of a CrisBio-based vaccine in a key swine indication.

The vaccine will be created together and manufactured using CrisBio, Algenex’s patent-protected Baculovirus vector-mediated expression platform, which leverages the power to function as natural single-use bioreactors. In June 2020, Boehringer Ingelheim received a New Veterinary Drug Registration Certificate from the Ministry of Agriculture and Rural Affairs of China for Ingelvac CSF MLV. This is the first CSF live vaccine developed jointly by Chinese research institutes and multinational companies. Some prominent players in the global swine vaccines market include:

This report forecasts revenue growth at global, regional, and country levels and provides an analysis of the latest industry trends in each of the sub-segments from 2017 to 2030. For this report, Grand View Research has segmented the global swine vaccines market based on product, type, and region: 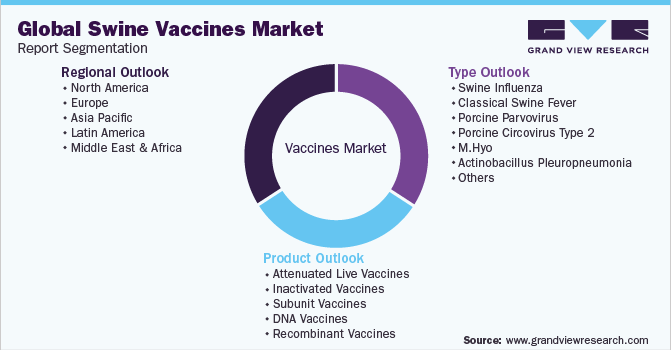 How big is the swine vaccines market?

What is the swine vaccines market growth?

Which segment accounted for the largest swine vaccines market share?

b. The inactivated vaccines segment dominated and accounted for the largest revenue share of over 31.0% in 2021. This is attributable due to easy availability, low cost, minimal risk of revert reaction of killed viruses, and new improvements by key players.

Who are the key players in swine vaccines market?

What are the factors driving the swine vaccines market?

b. Key factors that are driving the swine vaccines market growth include the rising prevalence of diseases in swine, the surge in the demand for animal protein, and advancement in vaccination services.