The global urinary catheters market size was valued at USD 3.4 billion in 2015 and is projected to grow at a CAGR of 5.41% during the forecast period. The market is experiencing growth due to rising occurrence of target diseases like urinary incontinence, bladder obstruction, urinary retention, benign prostate hyperplasia (BPH) and bladder cancers. Neurological disorders, such as cerebral palsy, multiple sclerosis, spina bifida, and others that lead to bladder dysfunction also require these catheters for urine drainage. The growing elderly population being more prone to such conditions is also contributing to the market growth.

Urinary retention is most common in BPH. The American Academy of Family Physicians (AAFP) estimates that every year in the U.S. there are more than 250,000 surgical procedures carried out for the BPH with approximately 2 million office visits. This condition may also arise on account of trauma or injury to the urethra, penis, or bladder and is also associated with pregnancy. Urinary incontinence is believed to be an undertreated and underdiagnosed condition and is a part of aging. The National Association for Continence states that it affects approximately 200 million people worldwide. It also states that one third of the men and women between the age of 30 and 70 years face loss of bladder control at some point in their adult life.

Some other key factors such as availability of improved catheters, growing awareness amongst the public, and increasing cases of genital surgeries is expected to boost the market growth. Furthermore, the reimbursement policies related to catheters, such as reimbursement provided by Center for Medicare and Medicaid in the U.S., help expand the market.

On the other hand, external catheters segment is expected to be the fastest growing segment during the forecast period as they are non invasive.

These products have an application in various medical conditions and diseases wherein it becomes difficult for the patient to empty the bladder. The urinary incontinence segment occupied the largest market share in 2015 accounting for 38.3% due to the growing prevalence of the disease and aging population.

The benign prostate hyperplasia (BPH) is anticipated to be the fastest growing segment with a CAGR of 5.80% It is a very common condition in aging population specially men. According to the Urology Care Foundation, around half of the men in the age of 51 and 60 years have BPH and up to 90% of the men in the age of 80 years have BPH. Acute urinary retention is a serious complication associated with BPH and requires catheterization of the bladder. 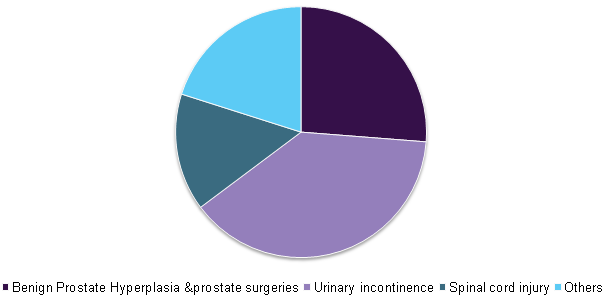 North America held majority of the market share of about 35.6% in 2015. The region suffers from the burden of rising urology diseases and growing geriatric population. North America has sophisticated healthcare facilities, and the reimbursement coverage contributes to the large market share of the region. According to the American Academy of Family Physicians, urinary incontinence affects approximately 20 million American women and 6 million American men at some point in their lives. It is estimated to affect millions of people and its prevalence increases with the increasing age of the population.

Asia Pacific is projected to be the fastest growing market with a CAGR of 6.67% during the forecast period. The emerging economies, such as India and China, in the region are lucrative markets due to the rising elderly population, increasing prevalence of chronic diseases, and increasing demand for advanced therapies and products.

Some of the major companies are B Braun Melsungen AG; Hollister, Inc.; Coloplast; Boston Scientific Corporation; C.R. Bard, Inc.; Cook Medical; Teleflex, Inc.; and Medtronic. Due to greater opportunities in both developed and developing countries, companies are undertaking strategic initiatives such as mergers and acquisitions, new product launch and expansion of the operations for increased global presence.

This report forecasts revenue growth and provides an analysis on the industry trends in each of the sub-segments from 2013 to 2024. For the purpose of this study, Grand View Research has segmented the global urinary catheters market on the basis of product type, application, and region: