The U.S. hospital consumables market size was valued at USD 34.54 billion in 2017. It is expected to expand at a CAGR of 5.6% over the forecast period. Growing number of surgeries in the U.S. implies increased usage of hospital consumables. Moreover, rising prevalence of chronic diseases coupled with expanding geriatric population in the U.S. is estimated to stimulate the growth of the market.

The geriatric population in the U.S. is increasing rapidly. As per World Bank (2018), the global population aged 60 and above was 15.4% of the total population in 2017 in comparison to 12.9% in 2010. Aging is considered as the greatest risk factor for myriad diseases, such as cardiovascular, urological, and neurological. People suffering from these diseases often require surgical interventions. Thus, increasing elderly population is anticipated to create high demand for hospital consumables in the coming years. 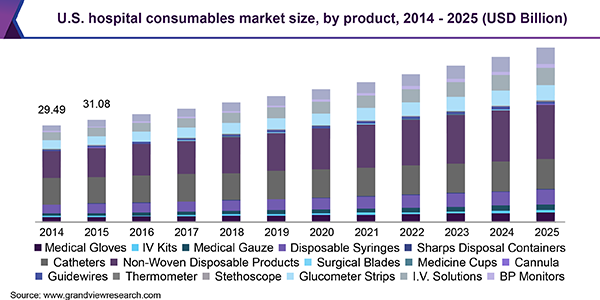 Any surgical intervention requires some common medical consumables such as gloves, catheters, guidewires, thermometers, and stethoscopes. Increasing sophistication in medical procedures and improved success rate, owing to rising use of advanced consumables and services provided in hospitals, is projected to drive the market over the forecast period.

Besides this, presence of advanced healthcare infrastructure has played a pivotal role in the growth of the market. Moreover, rising concerns regarding hospital acquired infections (HAIs) are impelling governments to encourage the use of disposable hospital consumables in the U.S. Surging demand for disposable products such as syringes, medical gloves, and catheters is poised to shape the future of the market.

The U.S. hospital consumables market has been classified into 17 key product categories, out of which non-woven disposable products accounted for the leading share of approximately 30.0% of the overall revenue in 2017. Non-woven disposables are distinctive class of textile materials bonded together to form a lucid structure, which are used for complete safety of medical professionals.

They are either made from natural fibers, such as cotton and linen, or synthetic fibers such as polypropylene, polytetrafluoroethylene, and polyester. These fabrics protect patients and medical professionals from HAIs, which is likely to increase their demand in hospitals over the forecast period. 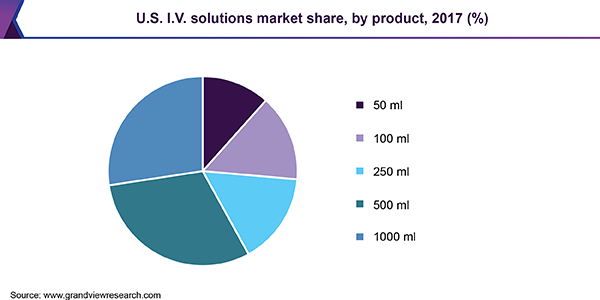 General procedure trays are expected to post the highest CAGR of 10.2% over the forecast period. Procedure trays consist of specific tools and instruments used in surgical and diagnostic procedures. The number of surgeries being performed in the U.S. has been increasing considerably over the years owing to ever expanding patient pool. This is turn is anticipated to drive the demand for general procedure trays.

V. solutions will be a prominent product segment during the forecast period. IV solutions are used to replenish fluid losses, treat electrolyte imbalances, and to administer drugs through IV therapy. These products are further classified based on their sizes. The 500 ml capacity bags sub-segment commanded the largest share in 2017 and it is estimated to remain dominant through 2025.

The market consists of a large number of players who manufacture a raft of products. Some key players operating in this market are McKesson Medical-Surgical Inc.; Medline Industries, Inc.; B. Braun Melsungen A.G.; Terumo Medical Corporation; Owens and Minor; Smith And Nephew, Inc.; Cardinal Health; and 3M. The arena is highly fragmented as most of the market is captured by medium-sized players.

This report forecasts revenue growth at country level and provides an analysis of industry trends in each of the sub segments from 2014 to 2025. For the purpose of this study, Grand View Research has segmented the U.S. hospital consumables market report on the basis of product:

Increased hospital admissions and the demand for consumables in the isolation centers across the globe are impacting the dynamics of these market spaces. With many medical devices' manufacturing centers in China, the supply has been severely disrupted which in turn is affecting the medical supply chain. We are working to account for this surge in our estimates. The report will account for Covid-19 as a key market contributor.