The U.S. liquid waste management market size was estimated at USD 19.45 Billion in 2016. The growing utilization of water per household and increasing industrial activities with growing population in the country is expected to drive growth over the next eight years.

The growing hospitality industry coupled with high demand for water and water-based products in the medical sector is expected to increase the generation of liquid waste in the U.S. Furthermore, the textiles industry is a major source of liquid waste owing to the vast amounts of water utilized for dyeing processes, which result in significant amounts of chemical & color effluents. 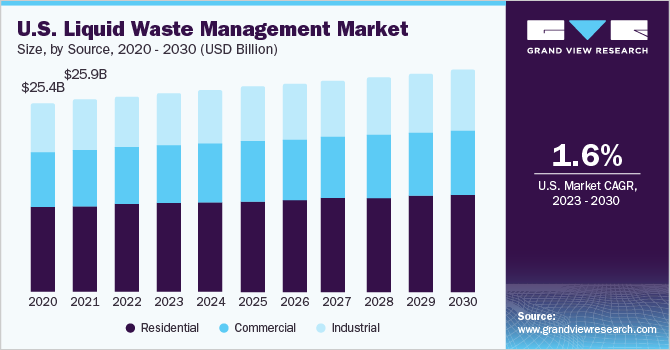 The industry is expected to witness high growth owing to the increasing demand of water for different activities in the commercial buildings, hotels and hospitals over the forecast period. The automotive sector also generates a large amount of liquid residue from OEM processes and after sale services such as washing, and fluid filling.

The organic or non-hazardous segment accounted for a substantial share in the U.S in 2016. However, the increasing manufacturing and oil & gas activities, pharmaceutical, paper and textile industry in the country is expected to increase the generation of hazardous chemicals.

Regulations pertaining to each end use industry, along with other specifications with respect to management are expected to be the key aspects for the growth. However, high equipment costs and plants with outdated machinery which require technological upgradation are the key areas of concern, restraining the growth.

The rising toxicity and safety concerns among consumers & industries, and realization of the benefits and sustainable advantages of reusing & recycling liquid residue from several large sectors is likely to fuel demand over the next eight years.

Toxic and hazardous liquid waste generated primarily from industrial sector is expected to account for the largest revenue share over the forecast period. The growing utilization of various types of therapies which contain nuclear elements and bio-hazardous material is expected to increase the generation of toxic residues, driving the revenue growth in the country.

The residential output, majorly organic & non-hazardous in nature is expected to drive the industry with rising population in the country. Commercial sector is expected to account for major market share on account of the hazardous and non-hazardous output generated through improved medical facilities and hospitality industry.

Chemical segment accounted for a 40.1% of the overall industry share and expected to witness significant growth owing to the increasing industrial activities. Optimum utilization of the manufacturing plants post-recession period in the country is expected to drive demand over the next eight years.

Textile industry consumes significant amount of dyes, chemicals, and around 200 liters of water per kg of textile produced. The residue emitted from this industry thus contains high amounts of toxic chemicals, even trace metals such as zinc and chromium on account of which the generation of hazardous and chemical residue from textile industry is expected to aid market.

The country has one of the largest automotive markets, and responsible for generating about 75 million ounces of paint sludge per year, which is mostly disposed into landfills. The oil & gas refining & processing sector emits vast quantities of residue owing to high levels of water consumption which is expected to drive the market in oil & gas sector.

The U.S. is the largest market for pharmaceuticals, including biopharmaceuticals, accounting for over 35% of the global industry. The growing medical industry across the globe coupled with increasing manufacturing of pharmaceuticals is expected to drive the demand over the forecast period.

Collection accounted for the largest revenue share in 2016 and is expected to continue its domination. Liquid waste could contain certain hazardous materials and specific actions are to be taken while handling and collecting the same. As a result, the collection through secure pipe network and transport vehicles is expected to drive the market.

Waste hauled from storage areas to the place of recycling by vehicles must be transported under proper observation to avoid spilling & leakage. Transportation accounts for the lowest share owing to the low per mile price of transportation charged by the companies with zero additional services charges as opposed to its counterparts.

Disposal/recycling of liquid waste is carried out through direct landfill injection via bioreactor process, solidification and then land filling or through a chemical wastewater treatment process. These activities are carried by the players in the industry to achieve a zero waste to landfill policy. In addition, the processes involved are responsible for energy generation as well.

The charges applied by the companies on collection are very high. Furthermore, the cost of transportation is variable in every state as it majorly depends on the prices of fuel and the distance covered from facility to the collection facility and back.

Texas is expected to be the second largest market in 2016. In addition to the residential waste, the growing industrial & commercial waste in the state is expected to account for the higher revenue share in the forecast period. The cost of disposal is low in Texas as compared to California or other major states owing to low electricity prices in the state.

Florida, most populous state in southeastern U.S. is largely based on tourism and agriculture industry. As a result, the region accounts for majority of the liquid waste generation of organic and non-hazardous residue from hospitality sector and is expected to have a positive impact on growth over the next eight years.

Various activities are carried out on wastewater, generated from showers, bath tubes, cloths washing for flushing toilets and urinals and irrigating non-edible uses in many states to reduce freshwater consumption. Florida Building Code allowed the use of gray water for flushing and related toilet cleaning applications.

The industry is fragmented and highly competitive with Waste Management, Inc. and Republic Services, Inc. as two major players accounting for 39% of the overall industry revenue. All the public traded companies together comprise 61% of the total revenues. The local players in the market enjoy monopoly and restrain penetration of major players in their markets.

A major trend arising from the need to improve management is the outsourcing of technologies to global & competitive players. Industrial outsourcers, combined their equipment and product companies. Municipal outsourcers, have divested themselves from the supplier companies such as Veolia sold USFilter to Siemens.

This report forecasts revenue growth at global, regional & country levels and provides an analysis on the industry trends in each of the sub-segments from 2014 to 2025. For the purpose of this study, Grand View Research has segmented the U.S. liquid waste management market on the basis of waste type, source, service, and country: