The U.S., Mexico and Japan omega-3 market size was valued at USD 862.2 million in 2019 and is expected to expand at a compound annual growth rate (CAGR) of 7.5% from 2020 to 2027. The rising importance of immunity boost post the COVID-19 pandemic, coupled with increasing consumer investment in healthcare and wellbeing, is expected to be the driving force for the market. Inactive lifestyles and fluctuating dietary patterns resulted in the rising occurrence of cardiovascular diseases, especially between the age group of 30 to 50 years. Increasing awareness regarding the importance of functional foods, such as their ability to reduce the risk of cholesterol-related diseases and provide optimal health, defines future growth opportunities in the U.S., Mexico, and Japan. 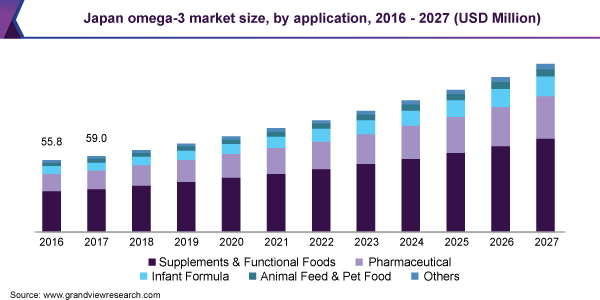 Japan has a large number of omega-3 manufacturing companies. Some of the key manufacturers based in the country include Bizen Chemical Co., Ltd., Novasep, AlaskOmega, and KD Pharma Group. Growing innovation and strategic marketing initiatives by these manufacturers to promote omega-3 induced products, such as infant formulas and supplement and functional foods, are likely to propel the demand for omega-3.

Consumption of DHA/EPA helps in reducing bad cholesterol and coronary heart diseases, such as strokes and blood pressure. The demand for omega-3 based nutraceuticals is projected to witness high growth over the forecast period on account of their several associated health benefits as well as their ability to work as an alternative to modern medicine.

According to the American Heart Association (AHA), in the U.S., around 647,000 people die per year because of cardiovascular diseases, which incur direct and indirect costs of over USD 219 billion. Furthermore, about 43.0% of people in North America reported higher cholesterol levels and 33.0% of them reported high blood pressure. This trend is expected to boost the growth in demand for pharma-grade omega-3 for treating coronary heart diseases, hypertension, cholesterol, and cancers.

Government agencies in these regions have issued guidelines stating the minimum intake of omega-3 per day. The International Society for the Study of Fatty Acids and Lipids (ISSFAL), the U.S. Department of Agriculture (USDA), and the Department of Health and Human Services (HHS) are some of the key organizations responsible for laying guidelines regarding consumption of omega-3 worldwide. Strong regulatory regimes also catalyze demand for omega-3 in the U.S., Mexico, and Japan.

Other common marine sources include COD liver oil, fish oil concentrate, krill oil, and algal oil. The EPA and DHA concentration is also found to be high in the blubber of whales and seals. High consumption of direct fish and fish oil in Japan is expected to limit the growth of omega-3 supplements in the country. However, increasing consumer spending on innovative healthcare solutions is expected to fuel industry growth.

The growth of the vegan population and several regulations and policies derived to safeguard fishing and other associated marine activities to protect the marine ecosystem is expected to drive the demand for plant-sourced omega-3 during the forecast period. Commonly available plant sources for omega-3 fatty acids include flax, chia, walnut, canola oil, and pumpkin seed.

Extraction cost and production cost for plant-sourced omega-3 fatty acids are higher. However, they are expected to witness significant growth during the forecast period due to their popularity among the consumers. Moreover, plant-sourced omega-3 is commonly used to extract Alpha-linolenic Acid (ALA), which is not usually found in marine sourced products.

The supplement and functional foods application segment dominated the market with a 50.7% share of the overall revenue in 2019. The health benefits of nutraceutical products and increasing healthcare spending are the key factors driving the segment. Rising usage of dietary supplements to maintain fitness and fulfill nutrient requirements among adults is expected to drive the segment.

Rising awareness regarding calorie intake reduction among gym professionals and athletes is likely to promote the use of omega-3 in the sports supplement. Furthermore, increasing product campaigns by the manufacturing companies to increase consumer awareness and knowledge regarding the product benefits are expected to impact the segment growth positively.

The demand for the product in the pharmaceuticals application segment is localized as it highly depends upon public awareness regarding DHA deficiencies. Omega-3 is used in the dermatology sector owing to its scalp nourishment properties to treat conditions, including dandruff and itchy scalp. Omega-3 fatty acids are anti-inflammatories, which protect the skin from UV damage and sunburn.

Rising demand for premium nutritious baby food in the U.S. is likely to drive the infant nutrition market, thereby augmenting the consumption of omega-3 in the region. Furthermore, the increasing significance of DHA in the development of the infant’s nervous system, vision, and brain, coupled with the product’s ability to support long-term health, is likely to boost demand for the product in the infant formulas application segment.

In 2019, Docosahexaenoic Acid (DHA) held the largest revenue share of 62.6%. DHA is an omega-3 fatty acid essential for brain development during early childhood as well as in pregnancy. It is also known to improve vision and heart functioning and reduce the inflammatory response.

Demand for docosahexaenoic acid has been witnessing a significant rise mainly in the U.S. and Japan as dietary supplements have become a part of the consumer’s daily diet. Continuous R&D rising around its applicability and efforts for new product development by food and nutraceutical producers are further aggravating the demand in the concerned countries. 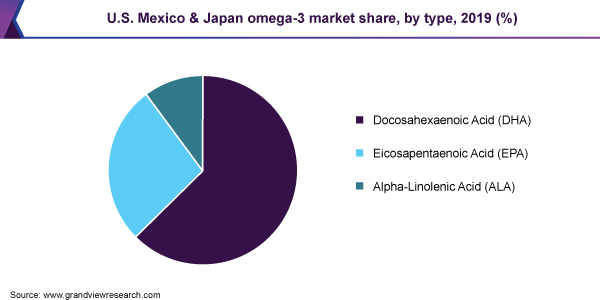 In 2019, Eicosapentaenoic Acid (EPA) emerged as the second-largest type segment. EPA is found in the flesh of cold-water fish, including tuna, salmon, cod liver, mackerel, herring, whale blubber, or seal blubber. It is used as a prescription medicine to reduce triglyceride levels, along with reducing heart disease risk and other complications, such as depression, heart attack, and menopause.

EPA is the most widely researched active nutraceutical ingredient after aspirin, penicillin, and prednisone. Although it is primarily sourced from fishes and nuts, due to the least number of food choices available to consumers with high omega-3 content, demand for EPA concentrated nutraceutical products is high among people. The U.S. was the single largest market for EPA in the world for the past few decades. However, the developing nations in the Asia Pacific are pacing up faster compared to any other region.

The industry in the U.S. held the largest revenue share of 82.5% in 2019. The demand for omega-3 fatty acids in the U.S. is projected to exhibit high growth over the next few years on account of rising consumer awareness in the country regarding the health benefits of omega-3 fatty acids. Moreover, increasing consumer preference for a healthy diet that is rich in omega-3 nutrients is projected to boost market growth over the forecast period.

Various market players in the country, such as Omega Protein Corporation, Martek Biosciences Corporation, and BioProcess Algae, are focusing on R&D activities to develop pharma-grade omega-3. These factors, coupled with the increasing use of enhanced medication to treat and prevent chronic diseases, are likely to spur the overall consumption of omega-3 in the upcoming years.

In 2019, Mexico accounted for a 9.5% share in the North American omega-3 market in terms of revenue. The consumption of omega-3 products is anticipated to be driven by growing awareness regarding the health benefits of supplements and functional foods among the female population in the country. Herein, rising demand for high-quality premium infant formulas owing to the inability of mothers to breastfeed due to working lifestyle is likely to spur the growth of the infant formulas application segment.

In Japan, the industry is driven by the growing interest in omega-3 fatty acid supplements extracted from fish and krill oils. Rising omega-3 consumption in the form of fortified food products, such as fish sausages and fish ham, is anticipated to drive the overall market in the country over the next few years. Moreover, the growing importance of products with high triglyceride levels is expected to propel the demand for omega-3-fortified foods.

The market is characterized by intense competition, with both public and private companies focusing on innovation to stay competitive. Public companies have been active in initiating strategies to gain a competitive advantage in the market. In the near term, privately held market participants are expected to follow suit, given the increasing number of players within the industry.

Spurred by heightened consumer interest in preventive health, paired with the aging population, sales of dietary supplements are expected to surge over the forecast timeframe. Prominent industry participants are already capturing dynamic opportunities within the industry by principally targeting self-directed consumers worldwide. In this regard, key market players are increasingly distributing their products through online platforms to target consumers/prospective consumers belonging to all age groups. Some prominent players in the U.S., Mexico and Japan omega-3 market include:

This report forecasts volume and revenue growth at the regional and country levels and provides an analysis of the latest industry trends and opportunities in each of the sub-segments from 2016 to 2027. For the purpose of this study, Grand View Research has segmented the U.S., Mexico and Japan omega-3 market report based on type, source, application, and region:

How big is the U.S., Mexico, and Japan omega-3 market?

What is the U.S., Mexico, and Japan omega-3 market growth?

Which segment accounted for the largest U.S., Mexico, and Japan omega-3 market share?

Who are the key players in the U.S., Mexico, and Japan omega-3 market?

What are the factors driving the U.S., Mexico, and Japan omega-3 market?

b. The key factors driving the U.S., Mexico, & Japan omega-3 market include increasing demand for omega-3 in applications such as fortified food, nutraceutical, and cosmetics industry on account of its immune-boosting properties and rising consumer awareness regarding the product benefits.