The global veterinary diagnostics market size was estimated at USD 3.3 billion in 2018 and is expected to grow at a CAGR of 6.4% over the forecast period. The growth of this market can be attributed to factors such as increased animal healthcare expenditure, rising incidence of zoonotic diseases, and growing number of veterinary practitioners as well as disposable income in the developing regions. 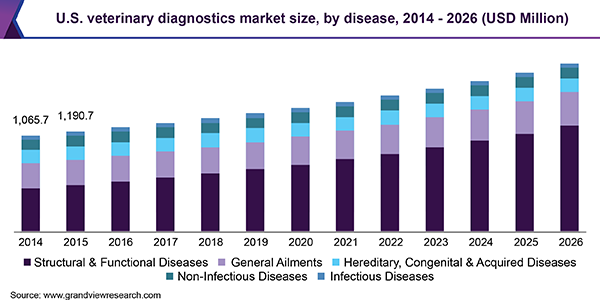 The rising incidence of zoonotic and foodborne diseases across the world has led the companies to develop efficient diagnostic options for the pets as well as livestock. Moreover, growth in the veterinary diagnostics market is facilitated by increasing animal healthcare spending and favorable regulatory scenario for approval of diagnostics.

Growing use of in vitro diagnostic tests and latest technologies, such as nanotechnology, fluorometric diagnosis, biosensors, wearables, and biomarkers has aided growth of this market. Research centers and laboratories also exhibit a surge in demand for in-house diagnostic tools and techniques.

The companies in this market are anticipated to invest more on the expansion of their manufacturing facilities, which in turn is expected to influence demand as well as supply of veterinary diagnostics across the globe. For instance, in July 2017 Henry Schein launched a new website that offered improvised e-commerce solutions with an efficient ordering process for dental, animal health, and medical customers, to improve the online experience of its users.

The product segment includes test kits, reagents, consumables, and devices. The consumables are expected to showcase highest growth, with a CAGR of around 7.0% over the forecast period. The overall market scenario is determined by deeply understanding the demand for these products from veterinary clinics, hospitals, labs, etc. Moreover, there is an increasing demand for point-of-care diagnostics by pet owners.

Commonly used point-of-care diagnostics for companion animals are blood glucose monitors, pregnancy kits, urinalysis strips, etc., whereas for livestock, the tests majorly remain confined to labs owing to high sensitivity and efficacy required in their disease testing. The diagnostic instruments and devices used for disease testing in animals include tonometer, laryngoscopes, centrifuges, analyzers, and others. This segment is estimated to exhibit a significant increase in sales in the future due to its higher consumption in veterinary clinics and diagnostic centers.

The species segment has two broad classes: livestock and companion animals. Among livestock, the porcine segment dominated the market in 2018, owing to growing consumption of pork and demand for better diagnostic procedures. The bovine segment also held a substantial share of the market owing to increasing incidence of zoonotic diseases among cattle. The companion animals segment, cats and dogs, held a major share as of 2018, owing to high expenditure on pet healthcare.

The market is constantly witnessing growth in developing nations as well, owing to increasing demand for animal products and animal protein. According to WHO, the world’s livestock sector is growing at a fast pace. Global meat production is expected to rise from 218 million tons in 1997 to 376 million tons in 2030. According to a USDA survey in 2015, pork accounted for around 40.0% of overall meat consumption.

Non-infectious diseases held a major share in 2018. The market has experienced an increase in the number of diagnostics with innovative technologies to detect diseases in animals, for instance, the Lab on a Chip technology that can analyze electrolytic imbalance in the body fluids such as urine, blood, and milk.

Hereditary, congenital, and acquired diseases segment is expected to show lucrative growth over the forecast period. Currently, these diseases are quite prevalent. Genetic disease is not clearly visible in the early stages, and, thus, not easily diagnosed. Molecular screening is recommended for such cases.

Infectious diseases in animals is a noteworthy danger to the worldwide human and animal population and their wellbeing. These diseases should be successfully controlled to prevent epidemic and spread of infections from animal to animal or animal to humans. Few examples of prevalent animal diseases are brucellosis, influenza, foot and mouth, respiratory & reproductive diseases, herpes, and tuberculosis.

The pathology segment dominated the market in 2018, owing to its wide variety of service offerings, such as various lab tests, imaging, and specialized tests. Analytical services is expected to exhibit fastest growth over the forecast period. This can be attributed to the invention of advanced technologies for animal diagnostics, such as nucleic acid diagnostics, Polymerase Chain Reaction (PCR), biomarkers, and biosensors. Veterinary labs and healthcare professionals are adopting these techniques as routine diagnostic tools. These tests are helpful in speciﬁc testing and screening of large samples.

Nanotechnology holds high growth potential in the market, as it enables screening of multiple pathogens in a single assay. These advanced technologies can improve animal disease diagnostic capabilities, while reducing the time and cost associated with conventional technologies. The molecular diagnostics segment is also expected to grow at a significant rate, owing to its increased use for research purposes. PCR is widely used for molecular diagnosis in animals for identification and detection of various pathogens. The traditional PCR techniques are rapidly being replaced by real-time PCR. It enables the rapid identification of pathogens and provides higher accuracy.

The end-use segment includes laboratories, hospitals, clinics, in-house testing, and research institutes & universities. Veterinary hospitals & clinics dominated the end-use segment in 2018, owing to availability of a wide range of diagnostic options in these facilities. Moreover, use of advanced analyzers for diagnostic purposes in veterinary hospitals has increased, which is aiding growth. 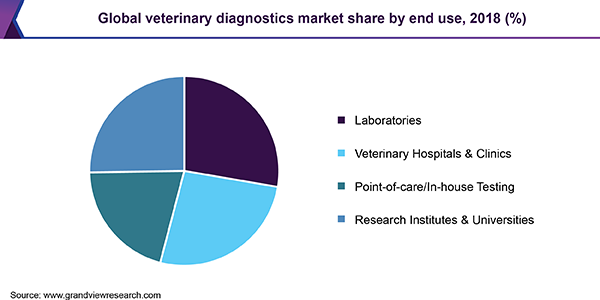 The point-of-care segment is expected to exhibit the fastest growth over the forecast period. Technologically advanced diagnostics, such as in-house analyzers and point-of-care devices, are convenient and provide quicker results, improving customer satisfaction. Research institutes also play a significant role in development and usage of these diagnostics. They govern deployment, identification, and development of new diagnostic methods or procedures for research and monitoring purposes of newly emerging or existing diseases in animals.

North America held the largest share in veterinary diagnostics market share followed by Europe. This might be due to favorable healthcare structure in this region, with high healthcare spending for animals. In addition, these regions have local presence of a large number of commercial players and well-established infrastructure.

Rising companion animal ownership is further fueling growth. According to an AAPA report, around 60.2 million U.S. households had at least one dog in 2017. Hence, the demand for better diagnostic services is rising. Moreover, favorable insurance policies are anticipated to expand scope for growth. For instance, in 2017, nationwide, around 57,000 insurance claims were reported for chronic diseases.

Furthermore, support from government entities coupled with higher R&D investment can also be attributed to this share. Emerging markets such as China, India, and Latin America are also expected to witness high growth opportunities in this space. Asian economies are expected to exhibit highest growth in the coming years.

This report forecasts revenue growth at global, regional, & country levels and provides an analysis of the latest industry trends in each of the sub-segments from 2014 to 2026. For the purpose of this study, Grand View Research has segmented the global veterinary diagnostics market report on the basis of product type, species, testing category, disease type, end-use, and region.