The global wi-fi 6, wi-fi 6E, and wi-fi 7 chipset market size was valued at USD 12.29 billion in 2021 and is expected to expand at a compound annual growth rate (CAGR) of 17.3% from 2022 to 2030. The global market demand was 1,852.9 million units in 2021. The growing need for an enhanced network, low latency, and bandwidth communications across enterprises is estimated to drive the market during the forecast period. The significantly increasing data traffic has accelerated the need for superior network connectivity across several verticals, such as corporate and industrial. Thus, it is expected to boost the installations of wi-fi 6 and 6E devices and subsequently increase the demand for their chipsets in the next seven years. 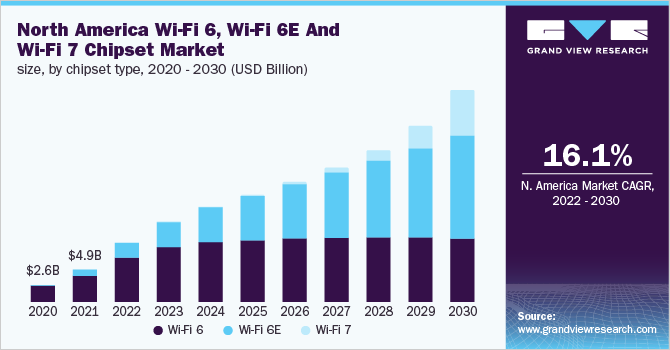 In 2020, Broadcom Inc. unveiled the BCM4389, the world debut of the Wi-Fi 6E customer device. The device expands the level to accommodate the about-to-be-workable 6 GHz band alongside broader 160 MHz channel bandwidths, doubling the speeds and cutting latency in half compared to the previous device. The BCM4389 offers real-world rates of over 2 Gbps and up to 5 times better battery consumption, making it an excellent choice for future Augmented Reality/ Virtual Reality (AR/VR) devices and flagship smartphones. The benefits of the new chipset technology over the legacy wireless standard are expected to push its adoption from 2022 to 2030 significantly.

Manufacturing factories are evolving significantly to improve their operational efficiency. The adoption of modern devices such as Augmented Reality/ Virtual Reality (AR/VR), wireless cameras, and collaborative robots is gaining momentum across the manufacturing industries. The operation of these devices seamlessly requires enhanced wireless network connectivity. Thus, it is expected to boost the adoption of Wi-Fi 6 and 6E devices and their components over the next seven years. Moreover, globally, rising trends of e-learning across universities and schools need unified network connectivity to deliver uninterrupted services. Thus, it is estimated to propel the global Wi-Fi chipset market growth over the coming years.

Impact of the Covid-19 Pandemic

The ongoing spread of COVID-19 viruses has had an adverse effect on Wi-Fi chipset production and demand across the global marketplace. Initially, in 2020, with the rapid spread of viruses, federal governments across key countries such as China, the U.S., Germany, Japan, and the U.K. enforced lockdowns in their countries. Due to the lockdown, several manufacturing facilities and international borders have been shut down temporarily. Thus, it had declined the overall chipset production, and supply in the global market hampered the overall market growth for a short time. However, as the number of COVID-19 cases across the countries, as mentioned above, started declining, federal governments relaxed the lockdown norms. Therefore, in Q3 of 2021, manufacturing facilities have been resumed with reduced labor capacity to minimize the spread of the virus.

According to research, the most recent generation of wireless standards is experiencing widespread adoption in businesses across all industries. The Wireless Broadband Alliance's (WBA) 2022 annual market report and a recent network modernization research by Enterprise Strategy Group, a part of TechTarget, predicted widespread adoption of Wi-Fi 6 by 2022. Moreover, the outbreak has forced enterprises to provide work-from-home facilities for their employees. Additionally, universities and schools have encouraged e-learning environments for their students, which is expected to boost the adoption of Wi-Fi chipsets market growth in the forthcoming years.

In terms of value, the Wi-Fi 6 segment accounted for the largest share of more than 80.0% in 2021. The Wi-Fi 6E segment demand is projected to be more than 7 billion units by 2030. The significant growth is attributed to the growing demand for high-performance network connectivity, allowing multi-users access simultaneously at constant bandwidth capacity. This segment is expected to witness considerable growth due to the high bandwidth needs of the mass population, where it needs to handle network congestion due to heavy network load.

Rapidly growing demand for modern devices with the supporting capability of new wireless frequency bands such as 2.4GHz, 5GHz, and 6GHz is further expected to accelerate the adoption of Wi-Fi 6 chipsets. Additionally, offering BSS coloring features in the chipset technology would enhance the network reliability in a very dense ecosystem by enabling frames from the neighbor’s network. These frames assist in minimizing network interference from other networks and boost network speed. It is anticipated to witness a massive demand across residential, commercial, and industrial applications.

The Wi-Fi 7 segment is expected to hold a share of over 21% by 2030. Wi-Fi 7 is the upgraded version of Wi-Fi 6E, with some enhanced technologies. The IEEE standard name of Wi-Fi 7 is 802.11be. It operates on a wide range of radio frequencies, such as 2.4GHz, 5GHz, and 6GHz. The maximum link rate that it offers is 40,000 Mbit/s. The Multiple Input Multiple Output (MIMO) enhancement and 16 spatial streams increase the video streaming quality and resolution. The Wi-Fi 7 has a Hybrid Automatic Repeat Request (HARQ), which helps multiple link adaption.

The Wi-Fi 7 uses the modulation scheme known as 4K QAM, which increases the throughput value. It comes with flexible channel utilization, which reduces the interference in the signal and further enhances connectivity. Wi-Fi 7 offers wireless interface capacity up to 33Gbps and a threshold over 10Gbps throughputs.

In terms of value, the WLAN infrastructure devices captured the largest share of over 40.0% in 2021. It is attributed to the soaring demand for chipsets to assemble into next-generation routers, gateways, repeaters, and extenders. A robust surge in the need for enhanced bandwidth capacity across enterprise customers is expected to ascend the global deployment of Wi-Fi 6 access points/routers. Furthermore, a high focus on providing superior client services and experience through fueling network bandwidth capacity is estimated to increase the adoption of next-generation WLAN infrastructure. Subsequently, it is likely to increase the 6 and 6E chipsets demand for these WLAN devices.

The introduction of new wireless standards has driven the demand for Wi-Fi 6 and 6E chipsets to integrate with new consumers’ devices, such as smartphones, laptops, and AR/VR headsets. The new chipset technology enables consumer devices to support several new use cases. These use cases mainly encompass cloud-based gaming, 4K/Ultra-High Definition (UHD) videos, and seamless video conferencing. Thus, the significantly growing consumers’ spending on new and advanced technologies is envisioned to augment the Wi-Fi 6 chipsets demand for consumer devices.

In terms of value, the commercial segment accounted for the largest share of over 38.0% in 2021. The enterprises/corporates segment demand is projected to be more than 1 billion units by 2030. The high growth is attributed to the rapidly increasing demand for superior wireless connectivity across corporate offices. Nowadays, corporate employees are collaborating with their clients and co-workers through video meetings, learning via streaming videos, and hosting numerous cloud applications. This requires high-speed internet connectivity and thereby raises the adoption of 6 and 6E routers and wifi-6 enabled end-user devices such as laptops. Resultantly, it is expected to increase the demand for chipsets over the forecast period. 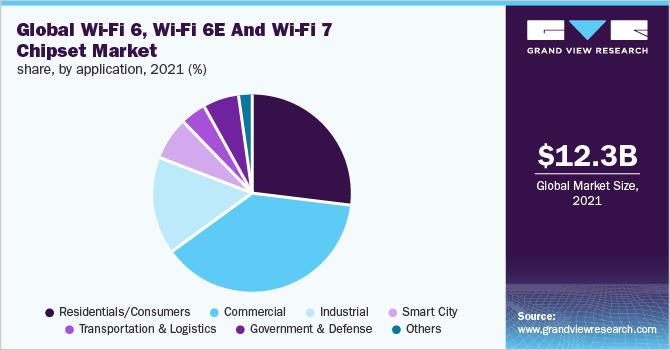 The rapidly evolving Internet of Things (IoT) devices has raised the adoption of Wi-Fi 6 and 6E chipsets across several industry verticals, including healthcare, manufacturing, smart city, and the public sector. The number of IoT connections is expected to exceed 4 billion by 2030. A notable rise in IoT connections would need high internet speed to function and communicate seamlessly. Therefore, the deployment of 6 and 6E devices is expected to witness massive growth over the forecast period. Consequently, it is anticipated to fuel the demand for chipsets.

Asia Pacific held the largest volume share of over 35.0% in 2021. This is attributed to the substantial rise in the investments in developing wi-fi 6 and 6E chipsets-enabled smartphones, routers, and laptops, among others. These devices support next-generation wireless frequency bands and deliver a unified network experience. The presence of prominent wi-fi 6 and 6E chipsets manufacturing facilities across key countries such as China, Japan, South Korea, and Singapore is expected to help the Asia Pacific market to grow at a significant rate from 2022 to 2030.

In the U.S., the market grabbed a significant share in 2021. The U.S. is showcasing notable investments in implementing smart industries, constructing smart homes, and rolling out smart cities. On the other hand, the inclination toward high graphics online/cloud gaming is flourishing among consumers in the U.S. In addition, the U.S. is emerging as an early adopter of smart transportation and self-driving car infrastructure. These developments are expected to drive the demand for wi-fi 6 and 6E chipset components in the U.S. from 2022 to 2030.

Moreover, due to the ongoing COVID-19 pandemic, several countries such as the U.S., China, Japan, the U.K., and Germany are aggressively spending on building digital healthcare infrastructure. This would assist in telemedicine, remote diagnostics and surgery, and remote patient monitoring services. This, in turn, is expected to fuel the growth of the hospital segment from 2022 to 2030.

Moreover, few prominent players are focusing on mergers and acquisitions to expand their product portfolios and market presence. For instance, in May 2021, NXP Semiconductors acquired Marvell's wireless connectivity portfolio worth USD 1.76 billion. The strategic acquisition consists of Marvell's Bluetooth and Wi-Fi (including Wi-Fi 6) technology portfolio and associated assets. Additionally, the acquisition would help NXP expand its Wi-Fi 6 chipset offerings across key application areas, including industrial, IoT, and automotive. Some prominent players in the global wi-fi 6, wi-fi 6E, and wi-fi 7 chipset market include:

This report forecasts revenue and volume growth at the global, regional, and country levels and provides an analysis of the latest industry trends and opportunities in each of the sub-segments from 2019 to 2030. For this study, Grand View Research has segmented the global wi-fi 6, wi-fi 6E, and wi-fi 7 chipset market report based on chipset type, device type, application, and region:

b. North America dominated the Wi-Fi 6, Wi-Fi 6E, and Wi-Fi 7 Chipset market with a share of 34.7% in 2021. This is attributable to the substantial rise in the investments in developing wi-fi 6 and wi-fi 6E-enabled smartphones, routers, and laptops, among others.

What are the factors driving the Wi-Fi 6, Wi-Fi 6E, and Wi-Fi 7 Chipset market?

b. Key factors that are driving the Wi-Fi 6, Wi-Fi 6E, and Wi-Fi 7 Chipset market growth include the rapidly growing need for enhanced network bandwidth and low latency communications across enterprises, high investments in developing next-generation smartphones, and others