Distributed Natural Gas-fueled Generation, A Perfect And Reliable Source Of Energy: Will Grow Exponentially In Years To Come

Distributed generation (DG) of power typically refers to an approach of providing a useable energy at or near the energy consumption area. It covers a variety of small-scale generation technologies such as fuel cells, wind turbines, and solar panels, large-scale technologies are termed as centralized power generation which is often located miles away from the centers of population and industry. Despite facing lot of challenges, such as additional costs in integrating DG systems and regulatory challenges including financial incentives and subsidies, DG is expected to continue to develop and generate new opportunities both for suppliers and consumers of energy.

With the increase in global population day by day, demand for efficient and environment-friendly energy is on a rise. According to the Energy Information Agency (EIA), the U.S. alone would expect a demand of 223GW of new generating capacity in the near future. But the increase in demand cannot be met solely by constructing large and centralized generation plants. A lot of government initiatives has been taken in the recent past in order to reduce carbon footprints and replace natural gas as a primary energy source. The prospects for natural gas in fueled microgas and microturbines is increasing and is mainly getting used by large manufacturers since natural gas reduces carbon footprint ad also is a reliable source. Natural gas is shipped via underground pipelines that are not subjected to an interruption, unlike traditional grid systems that rely mostly on above power lines that can easily be harmed by bad weather conditions, etc.

Natural gas distributed generation technology such as turbine and engines are not new to the market. Emerging technologies like fuel cells, microturbines, microgrids are relatively new in the industry and are highly efficient than the traditional ones. These technologies can be used in highly-efficient configuration with combined heat and power (CHP) also, enable the use of renewable sources.

Microgrid is one of the most used DG technology. It is a small power system comprising of electrical generation units that can be operated in conjunction with central power systems. Microgrids also offer the potential to integrate with the natural and renewable sources of energy with fossil-fuel backup power. Furthermore, it serves as an advantage of using waste heat in a productive manner since it is generated close to where it gets utilized. 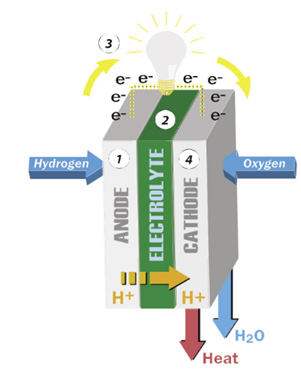 Fuel cell is similar to a battery that converts energy into electricity using an electrochemical process, but it does not store energy in the form of electrodes, rather, fuel and oxidant reactions are continuously fed to a fuel cell in order to generate electricity. Fuel cell requires hydrogen as the fuel source. However, commercial fuel cell manufacturers utilize natural gas as the fuel source due to the absence of well-established hydrogen infrastructure. Fuel cells are clean and efficient. It extracts electricity without going any combustion process. Stationary fuel cells are easy to place in urban areas due to their promising emission profile and quiet operation. Hence becomes the first choice of the power industry.

The long-term abundance and low-cost of natural gas provide real-time opportunity for fuel cell technology to grow and capture the overall market. Lawmakers and public opinions are embracing the environmental friendly generation of energy which is now possible from natural gas-fueled generation. Technological advances are continuously paving the way towards a greener and a cleaner environment.