Electric Scooters Market: Fluctuating Fuel Prices Have Led To A Decrease In The Sales Of Fuel-Powered Vehicles

Electric scooters are two or three-wheeled vehicles powered by electricity. This power is stored in a rechargeable battery, which drives the functioning of electric motors. The slow charging time required for electric scooters is one of the major concerns among the users. To address this concern, manufacturers are investing heavily in research and development to improve the charging time and range of these vehicles.

For instance, Power Plan Plus has announced the development of a carbon battery that gets charged 20 times faster than other batteries. This battery offers large volume storage of electricity at low cost. Moreover, research is also conducted on developing a water-based organic redux flow battery that is more environment-friendly and cheaper than the current lithium-ion batteries.

Advancements are being carried out in the manufacturing of solar power electric vehicles. ETI Dynamics launched a prototype of a solar electric hybrid scooter in India. This next-generation scooter is equipped with a bendable solar panel, which provides a speed of 45 Kmph. The introduction of solar panels in scooters is expected to increase the range of the distance traveled by the vehicle by approximately 15-20 percent. As this scooter is not commercialized, the technology is restricted to electric cars. However, solar powered scooters are expected to take-off in the near future. 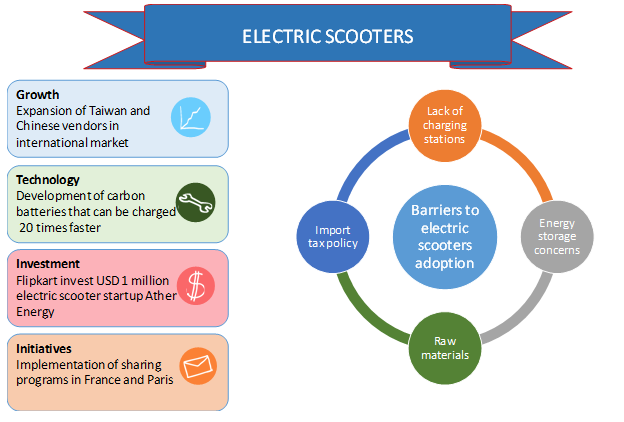 There has been a growing trend among manufacturers to establish battery swapping stations and to develop a supercharger network that provides convenience to their consumers. For instance, Tesla Motors is building a network of up to 120kW supercharger in Asia, Europe, and North America. The development of these systems is a strategic initiative undertaken by manufacturers to overcome the barrier of adoption of electric scooters, owing to the inadequate charging infrastructures.

Standing/self-balancing scooters are expected to witness a positive growth over the forecast period. The usage of self-balancing scooters in residential and commercial applications for integration of day-to-day operations is propelling the demand for these scooters. For instance, Segway’s are used in the U.S. by the patrolling team to access the congested areas that are inaccessible by vehicles. Additionally, these scooters are used as a part of bomb disposable squads in the North American and European regions to maneuver disposable tools quickly.

The governments of several nations have made amendments to the electric scooters law to protect the users from road fatalities. The government of India is expected to withdraw all exemption for electric scooters through the amendment to the Motor Vehicles Act. The Ministry of Transportation and Communication in Taiwan is considering the licensing requirements for electric two-wheeler users to crack down illegally modified bikes and to enhance road safety education. Similar laws exist in Australia in which, on road electric scooters are limited to 25km/h and 250 W.