“Use this deodorant, and you will feel fresh and relaxed for the rest of the day!”

“Want to be the life of the party? Use this perfume, and you are on your way!”

These are just some of the advertisements, or their approximations, that we see in our day-to-day life. Watching them influences our purchasing habits, where we base our buying choices on which smell or aroma can last longer. Ever seen an air freshening or scenting machine while waiting in the reception area of a doctor’s office? You must have, and there is a very solid reason to have them in such spaces - to make the air around us smell pleasant, in simple words! That’s all well and good, but where do these scents come from? What gives them their everlasting smell? The simple answer to that - fragrance fixatives.

Fragrance Fixative? What is it?

Fixatives are substances that restrict the volatility of fragrance components and help prolong the longevity of the aroma in perfumes, which is a crucial factor determining the product’s success in an increasingly competitive world. Fragrance & flavor fixatives are widely used in different sectors such as cosmetics, skincare, haircare and homecare products. The fragrance fixatives market is witnessing continued growth on account of the products possessing characteristics such as high rate of diffusion, high solubility & chemical inertness. It is only due to their use that there is a gradual change in the perfume aroma, as the ingredients start to fade away. This helps in increasing the lasting effect of the product in which they are used.

Normally, fixatives are the base notes in a perfume, and kept at 3-5%. Slower evaporation rates help in enhancing the properties of fragrance fixatives, and certain base notes such as sandalwood, myrrh and patchouli offer these features. Their presence in a perfume formula is also restricted to around 10-20% of the total scent, as they have strong, distinct odors.

Which Are The Most Prominent Fixatives? 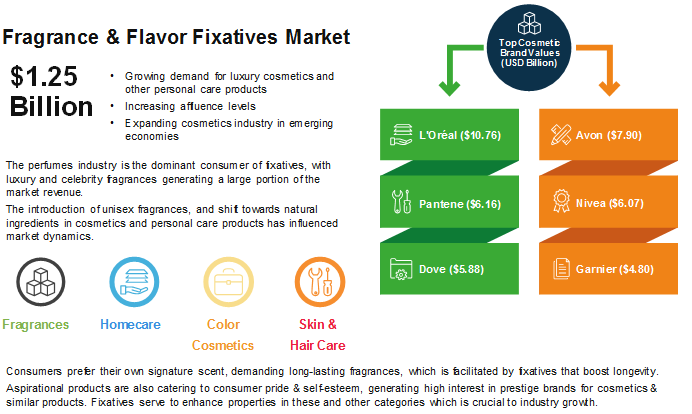 The industry for fragrance fixatives has seen very positive growth in recent years, and following are the reasons driving the global market:

Some of the major industry players that are involved in the fragrance fixative market space are Eastman Chemical, Tokos BV, Lotioncrafter LLC, Paris Fragrances, SVP Chemicals, Synthodor Company, PFW Aroma Chemicals, Zaki, along with newer entrants such as Landmark Perfumes & Aromatics and The Essential Oil Company. Recent developments seen in the industry include: