The global 2-ethylhexanol market size was estimated at USD 5.89 billion in 2021 and is expected to grow at a compound annual growth rate (CAGR) of 2.9% from 2022 to 2030. Increasing demand for 2-EH acrylate, coupled with surging demand from rapidly-growing automotive and construction industries in Asia Pacific, is one of the key trends stoking market growth. 2-ethylhexanol (2-EH) is used in a variety of applications such as plasticizers, acrylate, and nitrate. These chemicals are further employed in various industries including plastics, rubber, construction, automotive, pharmaceuticals, and personal care. A few major players in the market have been investing in R&D activities to improve the application scope and market reach of the product and, in turn, sustain their competitive positions. 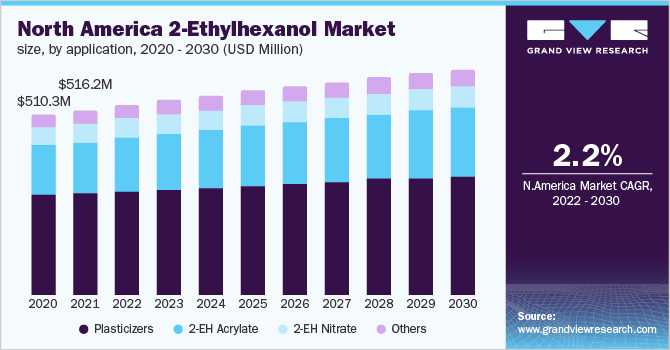 The market is majorly driven by surging demand for 2-EH acrylate from the paints & coatings and construction industries. Furthermore, with rise in disposable incomes in countries such as the U.S., India, and China, demand for new houses and apartments is expected to grow considerably over the coming years. However, the demand for plasticizers is restricted in Europe and North America due to ban on its use in consumer goods such as children’s toys and related articles.

The regulatory framework for 2-ethylhexanol is governed by various regulatory bodies including International Agency for Research on Cancer (IARC), Occupational Safety and Health Administration (OSHA), and National Toxicology Program (NTP), among a few others. The framework specifies the chemical and physical dangers of raw materials used for manufacturing 2-ethylhexanol and general requirements for the storage and use of these raw materials. Transport, usage, and storage of propylene and syngas, which are used in the production of 2-ethylhexanol are permitted, provided the safety regulations are stringently followed.

2-ethylhexanol finds application primarily in the paints & coatings, adhesives, and construction industries. Robust growth of these industries globally, most notably in emerging economies, owing to increasing foreign investments and aggressive policies to support and drive domestic demand, is anticipated to be one of the key growth stimulants of the overall market.

Asia Pacific is likely to be the most promising market for 2-ethylhexanol during the forecast period. The widening base of the middle-class population, rapid industrialization, and flourishing manufacturing sector are some of the primary factors augmenting the market in the region. The demand for 2-ethylhexanol in the region is mainly dominated by manufacturers of plasticizers (phthalate and non-phthalate). Regions such as North America and Europe do not witness this trend.

The 2-ethylhexanol market finds use in a wide range of applications such as 2-EH acrylate, plasticizers, and 2-EH nitrate, among others. The main driving force of the market is increasing demand for 2- EH acrylate from the construction, & paints & coatings industries. The demand for housing is expected to grow considerably in countries such as China, U.S, India and India because of rising disposable incomes.

The 2-EH market is characterized by the presence of various huge industry player such as, BASF SE, The Dow Chemical Co., Eastman Chemical Company. The research and development initiatives being taken by various companies to enhance their product specifications, market reach, and develop simpler methods to process 2-ethylhexanol is expected to further augment the demand for the product over the forecast period.

Propylene and syngas are the key raw materials used in manufacturing 2-ethylhexanol. 2-EH is further used to manufacture plasticizers, 2-EH acrylates, 2-EH nitrates, and other specialty chemicals. 2-ethylhexyl acrylate is used in the production of homopolymers. It is also used to produce copolymers such as amides, methacrylates, acrylic acid and its salts, esters, vinylidene chloride, acrylonitrile, vinyl acetate, maleates, vinyl chloride, butadiene unsaturated polyesters, and styrene.

The regulatory framework for 2-ethylhexanol is governed by International Agency for Research on Cancer (IARC), Occupational Safety and Health Administration (OSHA), National Toxicology Program (NTP), Superfund Amendments and Reauthorization Act (SARA), Toxic SubstancesControl Act (TSCA), Toxic Substances Control Act of 1976 (TSCA), Registration, Evaluation, Authorization, and Restriction of Chemicals (REACH). The framework specifies the chemical and physical dangers of the raw materials used for manufacturing 2-EH, and the general requirements for the storage and use of these raw materials. The usage, transport, and storage of propylene and syngas is permitted, provided the safety regulations are stringently followed.

2-EH market is fragmented in nature owing to the presence of numerous manufacturers. The market is characterized by various raw materials used in the manufacturing 2-EH coupled with integration across the value chain. Technological innovation related to the introduction of new technologies that simplify the process of production of 2-EH is expected to drive demand. As a result, industry rivalry is expected to be high over the forecast period. In addition, the presence of various major chemical companies including, Eastman Chemical Company, BASF SE, The Dow Chemical Company and SABIC is expected to keep the competitive rivalry high.

Plasticizers, 2-EH acrylate, and 2-EH nitrate are the key applications of the product. In 2021, the plasticizers segment dominated North America, accounting nearly 54% of the global market revenue. Plasticizers are used in paints, rubber products, adhesives & sealants, and printing inks. Their use in all of the aforementioned applications is strictly regulated since it is considered to be a hazardous product. The growth of the plastics industry, especially in Asia Pacific, is projected to fuel the demand for plasticizers, which in turn will work in favor of the 2-EH market. 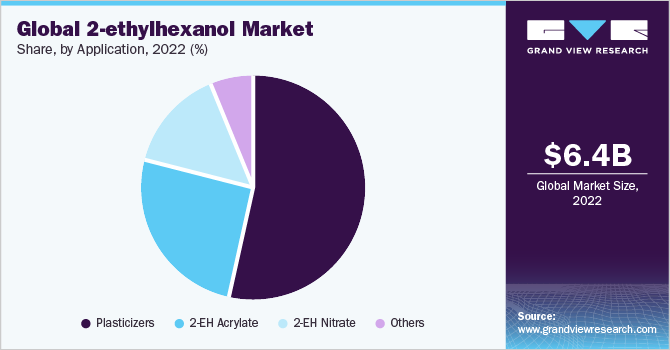 2-EH acrylate is poised to witness significant growth over the forecast period. 2-Ethylhexyl acrylate is used as a monomer in the chemical industry for the production of polymers and copolymers, which are mainly processed further to produce aqueous polymer dispersions.

These polymers and polymer dispersions are used in a variety of applications, including adhesives and binders for paints. Other applications of 2-EH acrylate include coatings, plastics, and textiles. In addition, 2-ethylhexyl acrylate is used as a monomer in chemicals used for construction; for instance, floor coatings and road-marking substances.

Asia Pacific was the leading regional market in 2021, with a revenue share of 57.5%. The region is estimated to maintain its position to reach USD 4.61 billion by 2030. It is also expected to be the fastest-growing market owing to increasing demand for 2-ethylhexanol from various industries.

China is anticipated to be the key revenue contributor in APAC, owing to strong industrial growth in the country. Rising disposable income, increasing employment opportunities, and strengthening economy are supporting the growth of end-use industries such as paints & coatings, plastics, and construction. In addition, increasing infrastructure investments in India, coupled with the government’s Make in India initiative, is likely to benefit the plasticizers and 2-EH acrylate segments.

In addition, Europe is projected to witness steady growth over the forecast period. Regulatory scenarios and end-user preferences have driven coating companies in Europe to develop multi-functional and sustainable solutions in addition to providing value-added services to their customers. This trend is projected to positively impact the European market over the forecast period. In addition, the growth of the protective and automotive coating industries in the region is poised to spur the demand for the product. 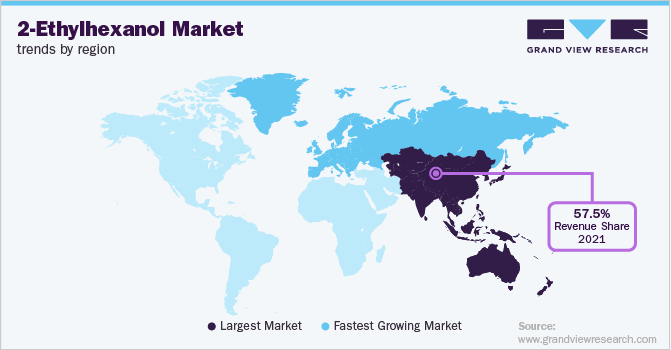 Asia Pacific is the largest 2-ethylhexanol market across the globe and accounts for a large share of the global demand for 2-EH and a majority of its end-use products. The region is expected to ascend at a very high growth rate over the forecast period, mainly owing to the high growth potential of the market in China. Manufacturers in the country are increasing their production capacity to meet the ascending demand for 2-EH.

Europe was the second-largest consumer in the global market, accounting for a 15% share of the global market in 2021. Growth demand for 2-EH acrylate, that is used in acrylic coatings, in the construction and paints & coatings industry, is expected to propel the demand for 2-ethylhexanol over the forecast period. Due to various regulations laid by the EU and REACH, regarding the ill effects of the product on human and environmental health, the use of DOP/DEHP is restricted in the region. This is expected to negatively impact the product market over the forecast period.

The global market is characterized by presence of various well-established players such and a few medium and small regional players. Market participants face intense competition from each other as majority of them are among the top chemical companies, with large distribution networks and a wide consumer base. Some of the key players in the market majorly cater to the paints & coatings, marine, transportation, and building & construction industries. Some prominent players in the global 2-ethylhexanol market include:

This report forecasts revenue growth at global, regional, and country levels and provides an analysis of the latest industry trends in each of the sub-segments from 2015 to 2030. For this study, Grand View Research has segmented the global 2-ethylhexanol (2-EH) market report based on application and region: 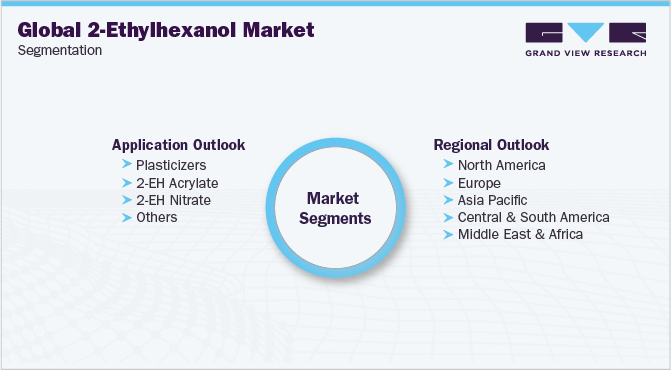 How big is the 2-ethylhexanol market?

What is the 2-ethylhexanol market growth?

Which segment accounted for the largest 2-ethylhexanol market share?

b. Asia Pacific dominated the global 2-ethylhexanol (2-EH) market with a volumetric share of 57.5% in 2021. This is attributable to high demand for 2-EH in the production of 2-ethylhexyl acrylate and 2-ethylhexyl nitrate, wherein the latter is used as a fuel additive to increase cetane number of diesel.

Who are the key players in 2-ethylhexanol market?

What are the factors driving the 2-ethylhexanol market?

b. Key factors that are driving the market growth include increasing demand for 2-EH acrylate in the production of chemicals used in automotive and construction industries