The global artificial intelligence chipset market size was valued at USD 7.4 billion in 2018 and is anticipated to witness a CAGR of 33.6% from 2019 to 2025. Increasing penetration of e-commerce and social media leads to a huge growth in data volume. Due to rapid growth in the volume of data, the need for high-speed processors has also increased, which is positively influencing the growth of the market. The chipset addresses the need for faster processing due to enabled machine learning. People’s inclination towards computer vision and machine learning devices is the factor driving the tech giants to invest in high-speed processors development. Besides, increasing users of smartphones and smart devices have certainly boosted the artificial intelligence chip market growth.

Artificial intelligence has been evolved into the most applied technology in the past few years and is anticipated to be a promising technology for upcoming smart devices. It has been applied in all aspects of society and the economy in a growing manner. Since it facilitates the intelligence of the services and products, it has been widely applied in industries, including finance, education, healthcare, logistics, and transportation. The chipsets provide the physical basis for AI-enabled application development, which makes it an essential component to incorporate while developing AI applications. 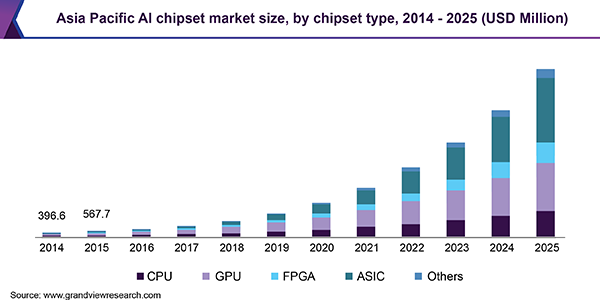 Several tech giants are working to develop artificial intelligence chipset to produce high-speed computing processors to support bulk data and applications simultaneously. For instance, Intel Corporation has developed Intel Nervana Neural Network Processors for both training and inference workload domains. These chipsets are specifically designed to meet the high-speed artificial intelligence computing requirement with enhanced performance. Nervana Neural Network processors are the dedicated accelerators that focus on artificial intelligence to provide users the right intelligent option at the right time. This has significantly driven the adoption of this chipset in consumer electronics, automotive, healthcare, manufacturing, among other various industries.

The accelerator type segment is classified into CPU, GPU, FPGA, ASIC, and others. In 2018, GPU as an accelerator dominated the artificial intelligence chip market among other chipset types. Several tech giants, including Apple Inc.; Arm Limited; Advanced Micro Devices, Inc; Qualcomm Technologies, Inc.; and Samsung Electronics Co., Ltd., have built their artificial intelligence chipset designs on GPUs incorporated with core CPUs. However, GPU alone is also used to boost the computing speed and performance of the chipsets, but major companies are using GPU as the main processor and CPU as an auxiliary processor while building an artificial intelligence chipset. For instance, NVIDIA Corporation offers both integrated modules of CPU and GPU and only GPUs for training and inference workload domains, namely DGX and Jetson AGX, respectively.

ASIC is also contributing significantly to the growth of the artificial intelligence chipset market and used for high-performance processors. For instance, Google has built its Edge TPU and Cloud TPU based on ASIC architecture. Amazon is working on building an ASIC-based artificial intelligence chipset to power its Alexa home assistant. FPGA is also one of the major accelerator types as it is adopted for the development of artificial intelligence chipset by key companies, including Intel Corporation; Baidu, Inc.; and Xilinx Inc. There are several other accelerator types, such as Intelligent Processing Unit (IPU), Neural Network Processors (NNP), Reduced Instruction Set Computer (RISC), Neural processing Unit (NPU), and Radio Processing Unit (RPU). These accelerator types are also used by some of the tech companies.

The workload domain segment is bifurcated into training and inference. The training segment holds a significant share. Several tech giants in the year 2018, such as NVIDIA Corporation; Intel Corporation; Xilinx Inc.; Advanced Micro Devices, Inc.; and Google Inc. worked on developing training chipsets. However, the inference chipset market is operated by more than 40 tech firms, including at least 20 startups, and is anticipated to be the promising chipset over the forecast period owing to the growing need for edge computing due to privacy and safety concerns. As of now, most of the training is done at the cloud/data center, while inference is done both in the cloud and at the edge. The application domains for training are several Google enables applications, such as maps, organizational datasets; and inference is autonomous vehicles, surveillance cameras, mobile devices, drones, and intelligent machines.

The training chipsets market is highly dominated by the GPU segment of NVIDIA Corporation, possessing massively parallel architectures. Thus, the training workload holds significant shares in the market for AI chipset. However, several major players are inclining towards the edge from the cloud, which demonstrates a healthy growth in the inference workload domain. For instance, various large companies in the market, namely Google Inc.; Apple Inc.; Baidu Inc.; Samsung; and Qualcomm Technologies, Inc., have built their artificial intelligence chipset for inference workload, supporting the computing process at the edge.

The computing technology segment is classified into cloud AI computing and edge AI computing. In 2018, cloud computing dominated the market for AI chipset due to the increasing use of technology in training workload-based chipsets. The increasing adoption of cloud-based computing in data centers for enhanced efficiency reduced operational cost, and improved infrastructural management are the factors influencing the growth of the cloud AI computing segment. Companies such as Intel Corporation; Google Inc.; NVIDIA Corporation; and Advanced Micro Devices, Inc. offer the artificial intelligence chipset based on both cloud computing and edge computing, among which cloud-based segment is higher revenue-generating segment for these organizations.

Based on vertical, the market for AI chipset has been segmented into healthcare, manufacturing, automotive, retail and e-commerce, marketing, consumer electronics, BFSI, and others. In 2018, the consumer electronics vertical represented a significant share in the market owing to an increasing number of artificial intelligence chipsets deployments in smartphones and other smart devices. For instance, Apple Inc. has built its A11 Bionic Chip, A12 Bionic Chip, and A13 Bionic Chip for high-performance processors, which consist of core CPUs integrated with GPUs as accelerators. Also, Samsung has developed neural processing units for its future AI applications. 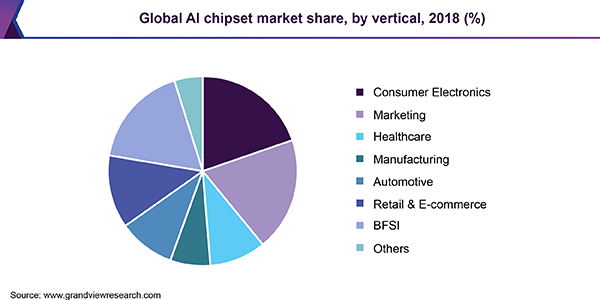 The automotive sector has also shown considerable growth in the market owing to the deployment of these chipsets in autonomous vehicles for inference purposes. For instance, NVIDIA Corporation offers these chipsets, namely DGX and Jetson AGX, for autonomous vehicles. The demand for artificial intelligence chipsets in smartphones, robotics, and other control devices contributes to the market growth due to the proliferation of applications, including cloud computing and the Internet of Things (IoT). Continued enhancements in existing technologies and emerging technologies, such as 5G networks and artificial intelligence, along with the huge growth in industrial electronics and automotive, are certainly the major driving factors for the market.

The North American market accounted for more than 39.0% share in 2018, owing to a large number of U.S. based tech giants in the market for AI chipset. The North American region is characterized by a large number of populations having improved purchasing power, continuous investments in infrastructure, and governments’ increasing focus on having in-house AI applications production. For instance, the Federal government has raised the investments in fundamental AI R&D according to the National AI R&D Strategic Plan. This plan has been introduced in the country to enhance access to high-quality data and cyberinfrastructure.

Most of the tech giants in the AI chipset market are U.S. based, such as NVIDIA Corporation, Intel Corporation, Xilinx Inc., Micron Technology, Qualcomm Technologies, EPIC, IBM Corporation, Google Inc., Microsoft Corporation, and Amazon Web Services, Inc. Also, several start-ups are working for building new chipsets for AI, such as Cerebral, a U.S. based start-up has built a large computer chip for use in data centers. The North American industry has witnessed significant growth in the adoption of AI technology in various industries, such as automotive, manufacturing, healthcare, retail, and advertising, among others. Such rapid development of AI applications creates an opportunity for the AI chipset market.

The key industry participants in the market include Advanced Micro Devices, Inc.; Google Inc.; Intel Corporation; Baidu, Inc.; Graphcore; Qualcomm Technologies, Inc.; Apple Inc.; Mythic; Huawei Technologies Co., Ltd.; and Xilinx Inc. Vendors in the market are focusing on increasing the customer base to gain a competitive edge in the market. Therefore, vendors are collaborating with various associations to increase the customer base. For instance, in February 2018, NVIDIA Corporation partnered with Continental AG to bring AI self-driving vehicle systems developed on the NVIDIA’s Drive platform. This partnership enabled the design and development of AI self-driving systems of automation level 2 to automation level 5.

Both the companies focused on developing self-driving solutions based on NVIDIA’s system-on-a-chip, DRIVE Xavier. In March 2018, NVIDIA Corporation partnered with Arm Limited to bring deep learning inferencing to the Internet of Things and consumer electronics devices in the global marketplace. The companies have integrated the NVIDIA’s open-source deep-learning accelerator architecture into the Arm’s project trillium platform to implement machine learning. This collaboration helped IoT chip companies to incorporate AI into their platforms to bring intelligent and affordable products in the consumer electronics marketplace.

This report provides forecasts for revenue growth at the global, regional, and country levels and analyses of the latest industry trends in each of the sub-segments from 2014 to 2025. For this study, Grand View Research has segmented the global artificial intelligence chipset market report based on chipset type, workload domain, computing technology, vertical, and region: