The global barite market size was valued at USD 1.55 billion in 2019 and is expected to expand at a compound annual growth rate (CAGR) of 3.8% from 2020 to 2027. The market is expected to be affected by the severe slowdown in oil & gas production in the short term with a strong recovery expected in the long term. Barite is mainly used in the oil & gas industry as a weighing agent in drilling fluids. The rising production of oil & gas around the globe, coupled with increasing penetration of barite in drilling fluids, is a key factor expected to boost the market growth in the long term. The outbreak of the COVID-19 pandemic in 2020 is expected to severely affect the product demand in the short term as oil producers are crippled with excess supply and diminished demand. 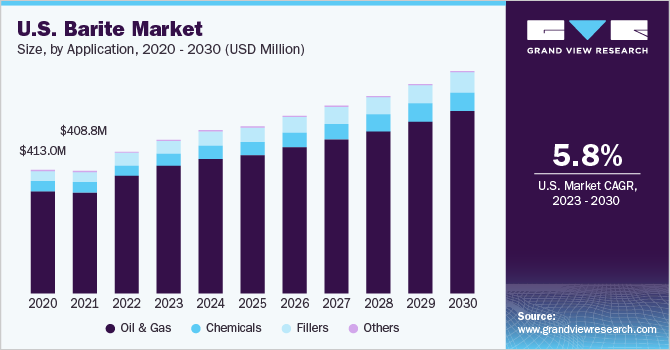 The consumption of barite in the U.S. spiked sharply by more than 80% owing to a significant increase in rig counts, particularly for offshore drilling, in most leading oil- and gas-producing states. In terms of volume, roughly 90% of the barite sold in the U.S. was for oil & gas drilling markets while the remaining 10% was for other industrial end uses, such as chemicals and filler manufacturing.

Furthermore, the gradual resumption of the country’s manufacturing activities is expected to benefit the product demand in the U.S. Barite is also used as a filler in the plastic manufacturing as well as paints and coatings, albeit in small quantities. The economic recovery from 2021 is likely to push the demand for barite from the industrial sectors, such as plastic manufacturing.

The oil & gas application segment dominated the market and accounted for a revenue share of 77.1% in 2019. Post the COVID-19 crisis, the global oil & gas industry is expected to recover from 2022 and grow at a moderate pace and is expected to reach its peak until 2029, thereby indicating a steady deployment of rigs, particularly in offshore fields. This is likely to drive the demand for drilling fluids, thereby creating a lucrative platform for market growth.

The fillers application segment is expected to expand at the fastest CAGR of 4.3%, in terms of revenue, from 2020 to 2027 owing to increasing penetration of the product as a filler in paints and plastics. The rapid growth of the construction sector in emerging economies of Asia Pacific is expected to stimulate the production of paints and coatings and plastics, which, in turn, is likely to foster the demand for fillers, such as barite. 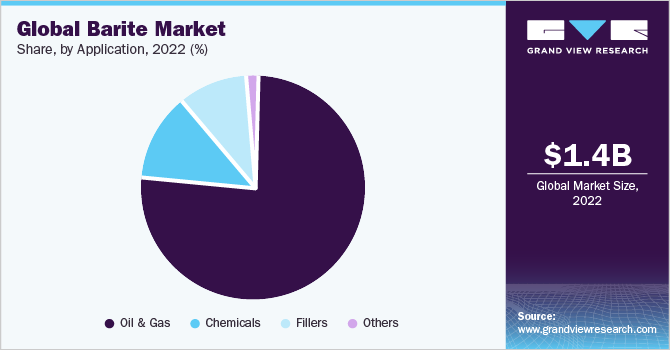 The chemicals application segment is expected to witness significant growth over the forecast period. Major chemicals manufactured from barite include oxides, chlorides, carbonates, sulfates, and peroxides. For instance, barium carbonate is used in the glass industry as a flux agent. It is also used to add clarity in electro-ceramics and for the removal of impurities in phosphoric acid.

North America dominated the market and accounted for a revenue share of 39.6% in 2019. The region is predicted to maintain its lead over the coming years. A significant boost in the production of tight oil, particularly in the U.S., has resulted in a significant demand for the product. Canada is yet another prominent market in the region as there are a number of oil rigs in the country for which barite is largely used for well drilling services.

The European market suffered the brunt of the COVID-19 pandemic in 2020. The European GDP is predicted to contract by more than 7% in 2020. As opposed to other oil-producing regions, such as North America and the Middle East and Africa, the value-added segments, such as filler and chemical industries, in Europe have a significant share in the Europe barite market.

Asia Pacific is predicted to expand at the fastest CAGR of 4.8%, in terms of revenue, from 2020 to 2027. According to the United States Geological Survey (USGS), China was the largest producer of barite in the world with production estimated at 2900 kilotons in 2019. Owing to the presence of minimal oil rigs in China, the product demand in China is significantly less as compared to its supply, and therefore China exports most of its barite to other nations, particularly to the U.S.

The Middle East and Africa emerged as the second-largest regional market in 2019. The region is one of the primary producers of oil. In the long term, the region is likely to shift toward offshore oil resources for its oil production as conventional onshore oil resources are on the verge of a decline. This is expected to benefit the market growth as the percentage of barite in drilling fluids for offshore drilling is higher than that of onshore drilling.

The global market is highly competitive and fragmented. China is the largest producer of barite, although it is highly fragmented comprising of several small to medium-scale producers. Major companies are striving for leadership positions through various strategic initiatives, such as capacity expansion and cost-effective production. Some prominent players in the global barite market include:

This report forecasts revenue and volume growth at the global, regional, and country levels and provides an analysis of the latest industry trends and opportunities in each of the sub-segments from 2016 to 2027. For the purpose of this study, Grand View Research has segmented the global barite market report on the basis of application and region:

How big is the barite market?

What is the barite market growth?

Which segment accounted for the largest barite market share?

b. Oil & gas dominated the barite market and accounted for a share of 77% in 2019, owing to its extensive utilization as a weighing agent in oil & gas drilling fluids.

Who are the key players in the barite market?

What are the factors driving the barite market?

b. The key factors that are driving the barite market include the expanding oil & gas industry around the globe.