The global battery management system market size was valued at USD 3.61 billion in 2018 and is projected to expand at a CAGR of 19.0% from 2019 to 2025. This growth is attributed to the increasing adoption of Electric Vehicles (EVs) and Hybrid Electric Vehicles (HEVs) across the globe owing to stringent policies, such as Kyoto protocol, implemented to curb Greenhouse Gas (GHG) emissions. EVs use lithium-ion technology, which has higher energy densities, less mass, and longer life than traditional batteries.

However, lithium-ion batteries fail if they are operated outside their safe temperature window, overcharged, or completely discharged. Thus, to ensure safety and prolonged life, they need special care and use of reliable BMS, especially in high-voltage battery packs used in commercial applications, such as EVs. For effectively controlling the several functions critical to the safe and proper operation of batteries, BMSs monitor batteries against functions, such as voltages and currents, temperatures, battery performance, and maintenance scheduling, to check whether the battery is overcharged or undercharged. In addition, BMS also monitors the conditions of individual cells in a battery pack. 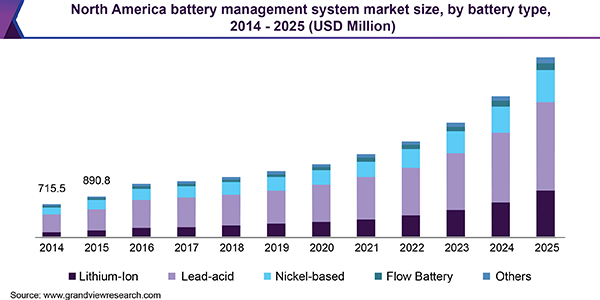 Some of the other primary functions of a BMS include protecting the battery from damage, protecting cells from out of tolerance conditions, and monitoring the charge and discharge state of every cell. All these factors are boosting the demand for BMS in automotive applications.

Use of BMSs can lead to a notable rise in the final cost of a product or application, which may result in reduced demand for large, cost-sensitive consumers due to its high cost, discouraging product manufacturers from using BMSs despite their proven benefits. Moreover, the lack of skilled labor capable of implementing or testing battery management systems in several emerging economies could act as a restraint for the battery management system market. Additionally, incentives for manufacturing HEVs are expected to increase investments from public and private investors, which, in turn, is anticipated to increase the penetration of HEVs.

Based on battery type, the market has been segmented into lithium-ion, nickel-based, lead-acid, and flow batteries. The lead-acid segment led the industry in terms of revenue in 2018 and is expected to retain its dominance over the forecast period. Lead-acid batteries are economical than rechargeable batteries and are preferred for applications entailing high power. They have low energy density, which makes them incompatible for applications, such as handheld devices requiring compact battery size.

Lithium-ion segment is expected to witness the maximum CGR from 2019 to 2025 owing to rising usage of portable devices, such as mobile phones, tablets, and Bluetooth devices. Nickel-based battery segment is also expected to exhibit significant growth in coming years. These batteries are charged with high speed and less stress and provide a longer shelf life. They perform well under rigorous working conditions and are relatively low in cost. They are used in professional cameras, power tools, two-way radios, and emergency medical equipment.

Based on topology, the market has been segmented into centralized, distributed, and modular BMS. The distributed BMS segment is expected to register the highest CAGR from 2019 to 2025 owing to controlled flow of energy inside and outside battery pack present in an EV. Increase usage of distributed BMS is further driven by the rising installed capacity and production of electricity from renewable energy sources. Also, BMSs are simple to install and are highly reliable.

E-bikes, power tools, portable battery packs, portable medical equipment, and home appliances use BMS to ease daily operations. Modular BMS is expected to be the second fastest-growing segment over the forecast period. These systems are used for high-quality electronic components and are easy to apply in battery packs owing to their flexible software and hardware functions.

Based on application, the market has been segmented into automotive, consumer electronics, medical and healthcare, military and defense, renewable energy systems, and UPS and telecommunications. The automotive segment is expected to witness the highest CAGR over the forecast period owing to rising number of vehicles requiring rechargeable batteries including EVs, Hybrid Electric Vehicles (HEVs), and Plug-in Hybrid Vehicles (PHEVs). BMS plays a major role in the aforementioned vehicles for supervising and guaranteeing reliable and safe battery operations. 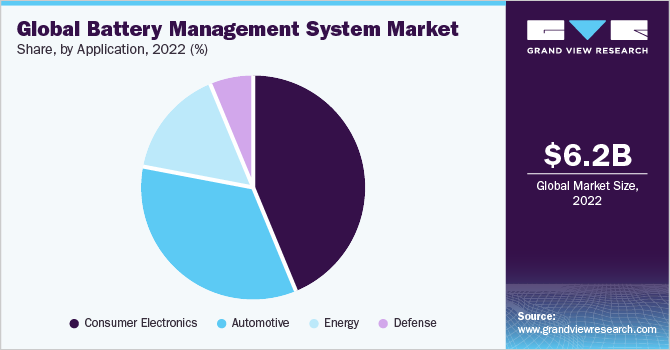 Consumer electronics is also estimated to exhibit a strong growth owing to increasing number of consumer applications and usage of portable electronics devices, which require long hours of battery charge. Rising environmental concerns, coupled with the growing need for electricity generation, are expected to increase the demand for BMSs in the energy sector. Product demand in off-grid renewable energy generation sector is expected to witness a significant rise in the future. This growth in demand can be attributed to the increased off-grid installations by end-use industries owing to government support and focus on improving living conditions in rural areas.

North America is expected to witness significant growth over the forecast period due to increasing penetration of EVs coupled with supportive government initiatives. The U.S. American Recovery and Reinvestment Act grants funds to private and government entities to develop HEVs, which is further expected to positively impact the market growth in the near future. Europe is also likely to register a healthy growth on account of increased penetration of EVs in Netherlands as a result of encouraging government initiatives, such as incentives to the EV manufacturers and exemption of registration fees and road taxes. Furthermore, the country plans to phase out conventional, internal combustion engine vehicles running on diesel or other forms of fossil fuel by 2025. Several other countries in the region have similar plans and are likely to phase out diesel vehicles in the coming years. Such bans will have a major impact on the growth of the BMS market.

Some of the major market participants include Johnson Matthey PLC (U.K.); Nuvation Engineering (U.S.); Valence Technology, Inc. (U.S.); and Linear Technology Corporation (U.S.). Companies are aiming for a greater share in the market through differentiated product offerings, brand loyalty programs, and increased focus on R&D activities. They also focus on opportunities to expand their geographic reach across emerging economies.

This report forecasts revenue growth and volume growth at global, regional, and country levels and provides an analysis of the latest industry trends in each of the sub-segments from 2014 to 2025. For the purpose of this study, Grand View Research has segmented the global battery management system market report on the basis of battery type, topology, application, and region: