The global cell culture protein surface coating market size was valued at USD 313.7 million in 2015 and is projected to grow at 15.7% over the forecast period. The increasing interest of scientists and biotechnology companies in stem cell research is a major factor driving the growth of the market. Cell culture protein surface coating provides improved cell adhesion and growth of in vitro cell culture. Thus, the demand for these products is increasing, which is expected to propel the growth of the market during the forecast period. The stem cell is a very effective and promising therapy to treat several severe diseases such as cancer, brain diseases, cell deficiency therapy, and cardiovascular diseases. For instance, Parkinson's and Alzheimer's disease can be treated by replacing damaged cells and tissues.

In addition, increasing the adoption of 3D cell culture is a major factor considerably contributing to market growth. 3D cell culture is a process in which biological cells are grown in a controlled condition, wherein cells could interact with their surrounding across all three dimensions. The protein-coated cell culture instruments provide a 3D microenvironment to achieve optimal cell adhesion and proliferation. For example, Millicoat Extracellular Matrix (ECM)-Coated Plasticware delivers enhanced cell adhesion, proliferation, and differentiation of cells. 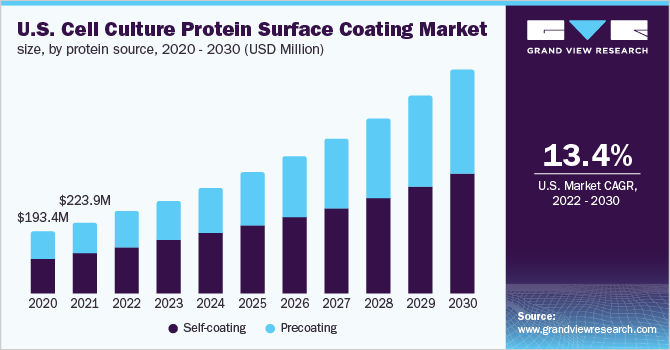 The growth of cell culture protein surface coating market is being driven by factors such as the increasing adoption of 3D cell culture, growing R&D spending in healthcare, and various ongoing cell-based research studies.

The rising interest of researchers and biotechnology companies in stem cell research is one of the key factors driving the market growth. Stem cells have become a potential tool for the treatment of several disorders such as osteoarthritis, heart failure, and eye diseases. Regenerative medicine has revolutionized the research in science and technology by growing entirely new organs and tissues outside the body by taking cells from the patients. This would further increase the demand for regenerative medicine for the treatment of diseases. With constant development in stem cell therapies, several new advanced protein surfaces have emerged. Advancements in the research and development field would further fuel the cell culture protein surface coating market growth in the coming years.

The cell culture protein surfaces offer better cell growth and adhesion compared to in vitro culture. Gelatin is usually used in the culture of vascular endothelial cells, muscle, and embryonic stem (ES) cells among others. Corning Incorporated, one of the leading players of the market offers a wide range of cell culture surfaces and substrates which enable cell attachment under difficult conditions. For instance, the company offers BioCoat Gelatin cultureware which provides attachment and growth promoting substrate for the culture of a variety of cell types. Moreover, in the past few years, cell culture has evolved and is widely used as a bioproduction and research tool. The surfaces used for growing cells have progressed rapidly, as the need for researchers has changed. Several breakthrough studies have helped with the advancement of the medium, resulting in a significant rise in the use of cell culture.

The other market drivers include growing demand for targeted therapy and protein therapeutics along with an increasing preference for 2D and 3D cell cultures. 3D cell culture is a process of growing biological cells in the controlled condition, where cells could interact with the surrounding cells across all dimensions. The protein-coated cell culture instruments offer a 3D microenvironment to attain proper proliferation and cell adhesion. For instance, Agilent Technologies offers automated imaging tools that could provide significant information to improve routine cell culture techniques and increase the reproducibility and effectiveness of downstream cell-based assays.

However, several government regulations and societal norms may restrict the use of animal-sourced protein coating, which may hamper the growth of the market. Industrial and Academic cell cultures are heavily investing in the use of complex-animal derived materials such as extracellular matrices, sera, and growth supplements to culture-wide range of cells, that includes transfected and established cell lines along with stem cells. However, the companies are shifting toward animal-free products. For instance, Corning Incorporated offers Next-generation Corning PureCoat ECM Mimetic Cultureware that promotes animal-free media formulations.

Despite huge significant progress in the advancement of cell culture techniques, the potential biohazard of working with human and animal tissues exhibits a number of ethical issues, such as handling, procurement, and the proper use of material. Mostly, in several countries, biomedical research is regulated strictly. Legislation differs mostly in different countries, animal and research ethics committees and institutional research boards for human subjects have played a key role in research governance. These factors may hamper the growth of the market to a certain extend in the coming years.

On the basis of type, the market is segmented into precoating and self-coating. In 2015, the self-coating segment was the highest revenue-generating segment. Rising investment in research and development is a key factor in boosting segment growth. The biotechnology and biopharmaceutical companies are focusing on the production of the monoclonal antibodies, protein therapeutics, induced pluripotent stem cells research, cryobanking, and cell-based assays development. Thus, the demand for the self-coating segment is also expected to remain high during the study period.

The precoating segment is expected to exhibit the fastest growth rate during the forecast period. This segment is classified into multiwall/microwell plates, flasks, Petri dishes, slides, and coverslips. The precoated cultureware provides several advantages such as it is ready-to-use, time-saving, delivers consistent quality, and improves isolation & cultivation of cells. Thus, the popularity of precoating cultureware is increasing, which is projected to boost the segment growth. 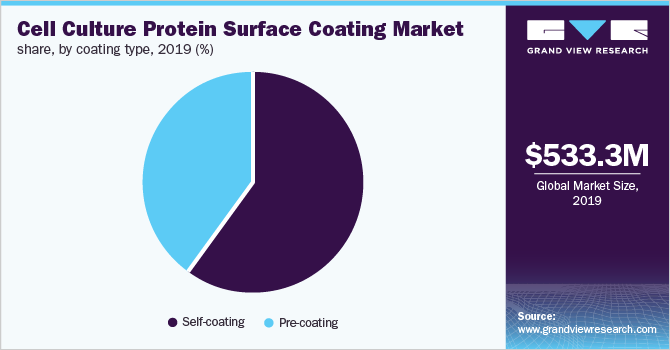 The animal-derived material segment is reported to have a major revenue share of the cell culture protein surface coating market in 2015. The large application of these products in the production of biopharmaceutical products including monoclonal antibodies and recombinant proteins is the most predominant factor contributing to its highest share. On the other hand, the demand for human-derived protein products is also high due to its large application in insulin production. The increasing incidence of diabetes drives the demand for insulin. For instance, in 2015, about 415 million people were suffering from diabetes worldwide. Thus, the escalating incidence of diabetes boosts the growth of the human-derived protein segment.

The synthetic material segment is expected to exhibit the fastest growth rate during the study period. The growing demand for animal-free components is a prime factor attributing to the growth of this segment. Ethical and religious constraints on the application of animal-derived protein propel the adoption of synthetic proteins.

North America dominated the overall cell culture protein surface coating market and accounted for the largest market share of 36.0% in 2021. The highly developed healthcare & research infrastructure and a large focus on drug discovery in the region have fueled the market growth. Moreover, the presence of advanced technology and the existence of leading biotechnology companies is driving the growth of the market in this region.

The U.S dominated the North American market owing to the rapid technological advancements, increasing approval for cell culture-based vaccines, growth in pharmaceutical and biotechnology industries, growing incidence of diseases such as cancer, strong government support, and high funding in cell-based research  For instance, in May 2022, Blue Water Vaccines, Inc. collaborated with the multidisciplinary Center for Research and Development in Immunobiologics, which aims to develop influenza vaccine candidates based on cell-culture and adjuvant formulation-based vaccines. Moreover, cell culture technology is used to produce some of the licensed vaccines such as polio, smallpox, chickenpox, rubella, and rotavirus. In addition to this, the presence of key market players such as Corning Incorporated, BioVision, Inc, Trevigen, Inc., PerkinElmer, Inc, Merck Millipore, among others is also contributing to the growth of the market.

China is anticipated to witness significant growth in the coming years owing to the presence of several biopharmaceutical companies and clinical research organizations in the country working towards drug discovery and development. The untapped opportunities in the country are attracting international players to invest in the country’s market. For instance, in October 2020, Merck KGaA collaborated with D1Med a Shanghai-based biopharmaceutical company, that aims to advance the 3D cell culture technology in China which could be used in the drug discovery process. market Moreover, with favorable government policies and growing R&D investments, the country is witnessing a surge of innovative biotech and pharma companies.

Strategic collaborations or acquisitions help vendors expand their product portfolio and geographical reach. For instance, in March 2014, Corning Inc., and American Type Culture Collection (ATCC) announced that they have extended their existing collaboration for the co-development of new applications for existing Corning’s and ATCC’s cell biology products.

This report forecasts revenue growth at global, regional & country levels and provides an analysis on the latest trends and opportunities in each of the sub-segments from 2014 to 2025. For the purpose of this study, Grand View Research has segmented the cell culture protein surface coating market on the basis of coating type, protein source, and region: