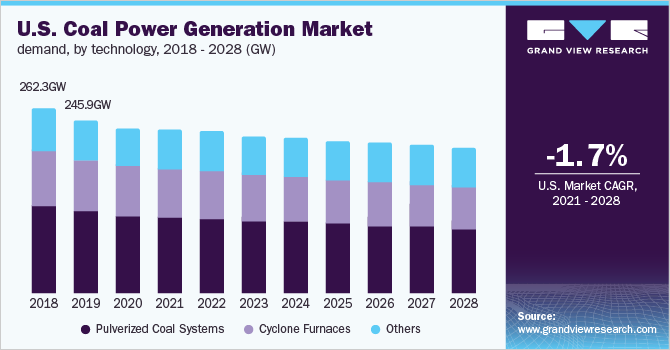 Total coal capacity produced every year between 2000 and 2019, nearly doubling from 1,066.0 GW to 2116.7 GW. The promise to provide cheap electricity to fuel financial growth has driven this development. Since some countries import coal and which is further blended and is used for power generation. For instance, India has been importing coal from various countries, such as Australia, Indonesia, and South Africa. Further, the coal companies blend it with the domestic coal to achieve improved fuel characteristics, which will further reduce emissions. Coal blending also recovers the reliability and performance of coal power generation plants and which ultimately helps to maintain stable production cost that drives the market further. In upcoming years, the blending process is required to adapt to eco-friendly norms as it helps sustain the ash content at specified levels.

In the U.S., modernizing the existing coal power generation plant with efficiency improvements and flexibility remains a priority. In January 2019, the U.S. Department of Energy announced the provision of up to USD 38.0 million in research and development to augment the overall reliability, performance, and flexibility of existing coal power plants.

Technological advancements in fly-ash handling will drive the growth of the market for coal power generation. A residue produced during the combustion of coal in coal power plants. Government authorities across the globe are executing various measures to control air pollution. Effective ash handling systems are being produced to comply with such regulatory aspects.

MAGALDI, a leading manufacturer of steel belt conveyors offered MAGALDI Ash Recycling (MAR), an improved form of MAGALDI Ash Cooler (MAC) system used for dry extraction, handling, and cooling, of fly-ash, a residue from solid fuel-fired boilers. This advanced process is used to recycle both economizer (ECO) ash and dry bottom ash in the combustion chamber. It converts them into fly-ash. It is also used as the residue further used as a replacement for Portland cement in concrete production, making coal power generation a more likable source to generate power.

Rapid urbanization and industrialization in emerging nations such as Asia Pacific and Central and South America, has caused a growth in electricity demand over the years for residential and commercial applications. The initiation of eco-friendly technologies may hinder the growth of the market for coal power generation. Strict regulations related to Greenhouse Gas Emissions (GHG) are expected to curb market growth and favor other technologies to generate electricity.

The pulverized coal systems technology market size was over 680.9 GW in 2019. Powdered coal is used by pulverized coal-fired boilers to generate thermal energy in order to use the entire boiler capacity for combustion more efficiently. The coal furnaces market size accounted for over 30.0% in 2019 and is expected to witness significant growth rates of 5.5% from 2020 to 2027. Cyclone furnace technology is another most extensively used method for power generation.

The residential segment held the largest volume share of 57.6% in 2019 and is anticipated to continue its dominance in 2027 with market size of over 1860.7 GW. Residential applications accounted for more than half of the coal power generation market share in the recent past and are expected to continue this dominance in the future. Such an inclination can be ascribed to factors such as swift industrialization, especially in the emerging nations. 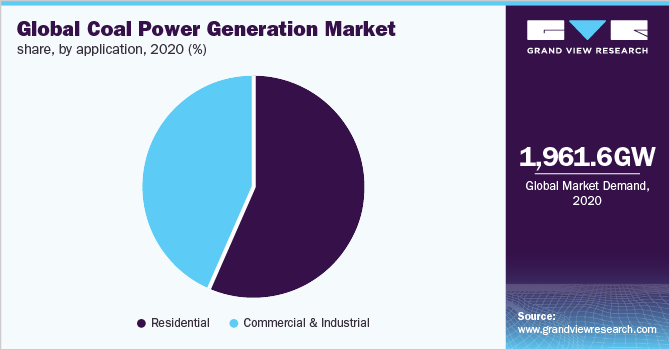 The commercial segment accounted for 42.0% of the total volume share in 2019. Commercial applications are supposed to experience a CAGR of 7.5% from 2020 to 2027. Increasing urbanization and industrialization mainly in the developing nations such as Asia Pacific can be qualified for such strong commercial application growth in the upcoming years. Besides research and development initiations to lower operating cost, streamline logistical procedures, and increase efficiency offers ample number of prospects for the industry participants.

Asia Pacific dominated the market and accounted for volume share of 33.0% in 2019. The region is expected to witness a volume-based CAGR of 5.1% from 2020 to 2027. Countries such as China and India are expected to assist the APAC market over the projected period. Upcoming power generation projects and growing industrialization in the region are the major factors driving the growth of the market for coal power generation in the region.

The availability of coal at low prices, primarily found in the coal-rich APAC region is expected to continue a vital driving factor for the market. Additionally, the growing consumption of electricity on account of increasing energy needs in day to day life, especially from developing markets, is expected to have a positive impression on market growth. India, China, and Southeast Asian countries led the overall rise in coal power generation in developing economies in 2018. China’s coal power generation rose by 3-4% in response to the increasing demand for electricity.

Western markets such as Europe and North America are predicted to observe a slightly slower growth rate compared to Asia Pacific due to strict regulatory measures. Rising environmental concerns have caused the collective acceptance of alternate sources for power generation, particularly in Europe. Such initiation for alternative sources of energy generation is anticipated to hinder growth in some regional markets.

The global coal power generation industry is consolidated moderately. Industry participants have taken several keen steps and invested in research and development initiatives to cut their operating costs, increase operating efficiencies, and minimize emissions into the atmosphere. Some of the prominent players in the coal power generation market include:

This report forecasts volume growth at global, regional, and country levels and provides an analysis of the latest industry trends in each of the sub-segments from 2016 to 2027. For the purpose of this study, Grand View Research has segmented the global coal power generation market report on the basis of technology, application, and region: