The global construction chemicals market size was valued at USD 39.17 billion in 2015. It is expected to grow with a CAGR of 6.3% from 2016 to 2024. Growing infrastructural developments and rising demand, especially from Asia Pacific region, will propel the market growth in the coming years. The global market is expected to witness considerable growth on account of rising building and construction and other infrastructure activities.

Furthermore, rapid urbanization in many developing regions would also boost market expansion over the forecast period. As the industry is highly affected by several regulations, major companies have been focusing on R&D activities to develop new bio-based products. The fluctuation of prices and supply of raw materials is likely to hinder market development. However, a growing number of residential and non-residential buildings and construction activities across the globe will drive the product demand over the forecast period. 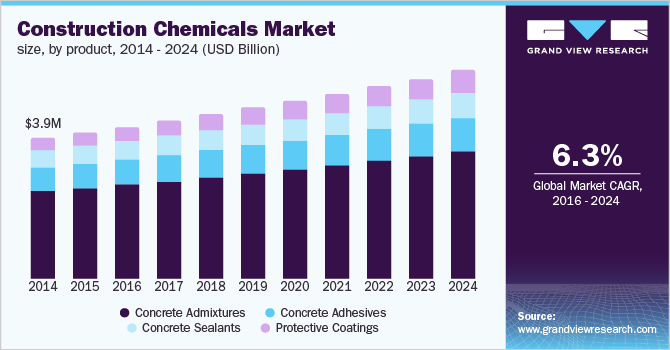 Asia Pacific region was the largest consumer for construction chemicals globally. China and India are the major countries in this region accounting for more than 50% of the overall market size. The growth of this market is directly associated with the development of the construction industry. Thus, growing spending on infrastructure development is expected to drive the global market. The infrastructure spending in Europe is expected to grow at around 3% annually reaching USD 508 billion by 2025. This will also have a positive impact on market expansion.

The concrete admixture was the largest product segment with a share of 64.7% in 2015. Cement is the major binding material used in the construction industry. Concrete is created by mixing cement with crushed rocks (aggregate), sand, and water. Concrete admixtures are added to the concrete to obtain better finish and strength. Admixtures are basically used for reducing water content in concrete and enhance the durability. The major admixture types used are lingo-based admixtures, Sulfonated Naphthalene Formaldehyde (SNF), and Sulfonated Melamine Formaldehyde (SMF). Among these types, lingo-based admixtures were the first to be used in concrete.

Construction adhesives are expected to witness lucrative growth during the forecast period. They are made of high-quality materials. They enhance the durability and bonding span of adhesives. Adhesives are created using cement, epoxy, and polymer formulation. Cement-based adhesives are largely used in floor and wall tiles. They compose of water-resistant cement and polymer-modified cement, which is useful in internal and external applications. Epoxy adhesives are cold-curing adhesives, which are resistant to water, oil, alkalis, and many other solvents.

Upcoming projects such as Panama Canal expansion is expected to foster the segment growth over the forecast period. Expansion of ultramodern offices and workspaces along with rapid urbanization and enhanced lifestyles has led to market growth. 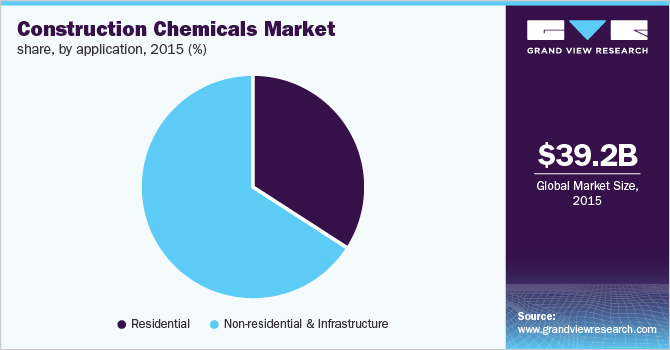 The positive outlook towards housing sectors in emerging markets including China, India, South Africa, and Turkey along with Middle East countries is expected to fuel the market growth in the near future. Rising demand for single-family housing projects coupled with growing spending capacity of consumers in developing markets including Nigeria, Mozambique, and Zimbabwe would propel construction chemicals demand over the coming years.

Asia Pacific was the largest regional market for construction chemicals owing to the rapid expansion of the construction sector over the past few years. North America and Europe are relatively mature markets and are characterized by new product development and high preference for bio-based chemicals. Asia Pacific is expected to witness substantial growth over the forecast period on account of increasing investments in infrastructure development coupled with rising consumer disposable income levels.

The economies of South East Asian countries such as Indonesia, Philippines, and Malaysia are experiencing rapid economic growth, which is likely to have a positive impact on the construction industry. These countries are witnessing a strong demand for infrastructure projects, which, in turn, will fuel the demand for construction chemicals in Asia Pacific, thereby driving the regional market.

The global market is highly competitive with a few leading companies holding the majority of the market share. Due to stringent environmental regulations, these companies are focusing on the development of new alternatives such as bio-based construction chemicals.