The global defoamers market size was valued at USD 3.2 billion in 2018 and projected to exhibit a CAGR of 4.8% over the forecast period. Rising use of defoamers in several agrochemicals, including fertilizers and pesticides, and significant growth in water treatment infrastructure drives the market.

Defoamers play a significant role in minimizing the carbon footprint caused by manufacturers and end-users, which is likely to propel the demand for low VOC solvent-free defoamers. Manufacturers are emphasizing on the usage of bio-based and sustainable raw materials instead of petro-based variants. Producers, on the other hand, are stressing on the development of modified and high-performance silicone compounds to enhance product performance. 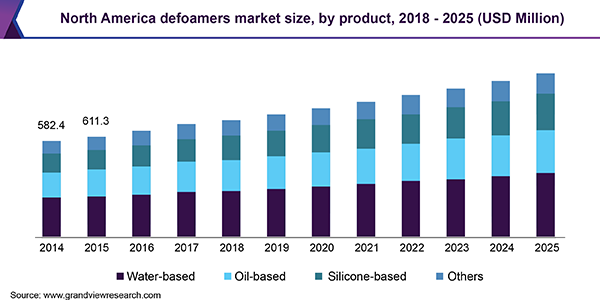 Environmental regulations across the globe have stimulated the use of solvent-free defoamers due to low VOC content. Water-based product variants are expected to witness a higher demand owing to their environmental sustainability. Manufacturers are now focusing on research and innovation to develop high-performance silicone compounds as raw materials.

Defoamers are widely used in water treatment infrastructure by municipal and industrial wastewater stream, which helps in the reduction of pump cavitations, prevention of loss due to overflow, and improvement of sanitation and safety. Hence, defoamers optimize the sludge dewatering process and can facilitate clarification, filtration, thickening, and floatation processes.

Rising environmental awareness among consumers in developed regions is anticipated to propel the use of water-based defoamers. The growing trend in the agrochemical industry and immense potential in agrochemical formulation is expected to create new opportunities in the market.

Regulatory bodies such as the U.S. FDA and the European Commission have enforced several laws to regulate the composition of defoamers. The organizations have specified usage limits of various components in the product formulation. Some variants contain harsh chemicals used in foods and have the potential to cause health hazards. As a result, stringent regulations by governing bodies in developed countries and associated side-effects could hinder the market during the forecast period.

Oil-based defoamers exhibit high performance in controlling macro-foam and reveal outstanding efficiency. The segment is anticipated to exhibit a CAGR of 3.8% for the forecast period. However, the negative impact that these products have on the environment is projected to act as a deterrent to segment growth.

Based on the application, the defoamers market can be segmented into pulp and paper, coatings, agrochemicals, water treatment, and food and beverages. Pulp and paper are expected to maintain a dominant position in the global market until 2025. The segment is anticipated to witness steady growth in agrochemical production, which in turn, is likely to propel the demand for defoamers in agrochemicals.

Defoamers are used in pulp and paper mills to reduce foam formation caused by entrapped air. The industry witnessed sluggish growth owing to an increased focus on digitalization in developed economies. However, spurring the growth of e-commerce is anticipated to drive the segment. 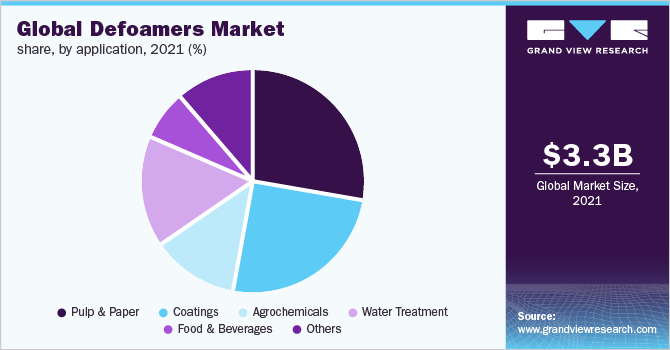 The coatings segment is anticipated to witness a rise in demand from 2018. It is also projected to be the second-largest segment fueled by the rapid penetration of waterborne coatings in industrial applications.

Agrochemicals are widely used in the production and application of several agrochemicals, such as fertilizers and pesticides. This segment is expected to register a CAGR of 4.6% over the forecast period. Asia Pacific, Europe, and North America accounted for a major share in the agrochemical segment owing to a rise in demand for high-value crops and increasing awareness among farmers.

The Asia Pacific leads the global market and accounted for a revenue share of 42.7% in 2018. The pulp and paper industry are key drivers for regional growth and the proliferation of online retailing generates a strong demand for pulp and paper in various packaging applications.

Europe accounted for the second-largest share of 24.3% in the global market in 2018. However, the market has witnessed sluggish growth of end-use verticals. Regulatory organizations in Europe are emphasizing on the use of defoamers that meet environmental specifications. The government has strengthened the use of processed water in various municipal and industrial applications.

North America is expected to exhibit a CAGR of 5.0% during the forecast period due to the significant presence of coatings, agrochemicals, and pulp and paper industries. Water treatment plays a vital role in shaping the regional market as private and government entities have made significant investments in wastewater recycling programs.

The market is characterized by the presence of large international companies, with strong distribution networks across the globe. The industry comprises prominent, well-established players that capture a small share of the market. Furthermore, several small players are operating in the regional markets, which leads to intense competition.

Manufacturers aim to strengthen their market position through new product launches, expansion of existing product portfolios, geographical expansions, and investments in research and development. Companies are focusing on developing products designed for specific applications. To strengthen their market positions, companies aim to expand their customer base in various industries. They are focusing on product development to meet varying customer needs.

This report forecasts revenue growth at global, regional, and country levels, and provides an analysis of the latest industry trends in each of the sub-segments from 2014 to 2025. For this study, Grand View Research has segmented the global defoamers market report based on the product, application, and region: