The global edge artificial intelligence chips market size was valued at USD 1.8 billion in 2019 and is expected to grow at a compound annual growth rate (CAGR) of 21.3% from 2020 to 2027. Increasing usage of social media and e-commerce platforms leads to a massive growth in data volume, which further creates the need for more efficient processors for quicker execution of machine learning tasks. The artificial intelligence chips address the need for faster processing due to enabled machine learning. Implementation of edge-based AI is one of the major trends in chip technology, as running AI processes on a device itself instead of a remote server offers benefits of higher speed and better privacy. Customer inclination towards Internet of Things (IoT) devices is one of the major factors driving the tech giants to invest in the development of high-speed processors. 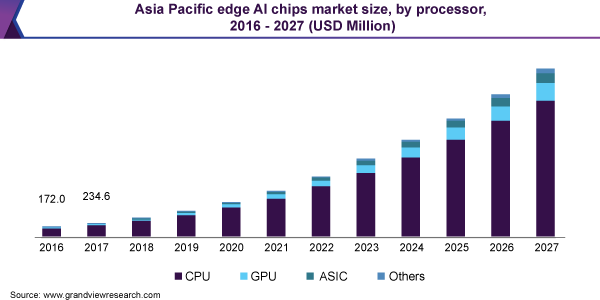 Until recently, artificial intelligence-related computations have been performed remotely in cloud-based data centers and on telecom edge processors or enterprise core appliances. Since artificial intelligence computations are highly processor-intensive, they require many traditional chips (data centers-based) of varying functions to execute. Also, the size, power capacity, and cost of the hardware made it a difficult task to execute such computing arrays in a relatively smaller storage or computing system. Now edge-based chips have emerged in the form of a substitute to address these issues related to data centers-based chips. Edge-based AI chips use lesser power and generate lesser heat along with having compatibility to get integrated with handheld devices, such as smartphones, as well as non-consumer devices, such as robots.

Edge artificial intelligence chips eliminate or reduce the need for transmitting bulk data to the data centers or cloud station. Thus these chips offer numerous benefits with respect to speed, usability, and data privacy & security by enabling processor-intensive machine learning computations locally. However, for some applications, not all machine learning-related tasks have to take place locally and transmitting data by a remote AI array for processing is preferred. For instance, data centers usage is preferred for applications involving data in large volumes, such as online video streaming.

The AI-related application technologies for edge computing are intelligent robots, autonomous vehicles, and smart hardware, among others. Artificial intelligence-supported edge computing technology is multifaceted as it runs through the algorithm mechanism, application, processor type, and computing technology. The primary applications that run over edge AI are related to image/video, sound and speech, natural language processing, device control, and high-volume compute. The edge AI chips help run these applications at the device-end itself.

The processor segment is classified into CPU, GPU, ASIC, and Others. In 2019, CPU, as an accelerator, accounted for the largest market share owing to the massive adoption of CPU in consumer devices, such as smartphones and smart wearables. Several tech giants, including Arm Ltd.; Apple Inc.; Qualcomm Technologies, Inc.; Advanced Micro Devices, Inc.; and Samsung Electronics Co., Ltd., have built their artificial intelligence chips on core CPUs. For instance, Qualcomm Technologies, Inc. offers Snapdragon mobile processors with multi-core CPUs, which are built to support edge mobile performance.

Based on device type, the market has been segmented into consumer and enterprise devices. Consumer devices include high-end smartphones, smart speakers, tablets, autonomous cars, and wearables. The enterprise devices include cameras, drones, various robots, sensors, and other IoT devices. In 2019, the consumer devices segment accounted for the largest share in the market owing to an increasing number of artificial intelligence chip deployments in smartphones and other consumer devices.

Furthermore, data processing on edge AI chips also provides better privacy and security for consumer devices. These chips can reduce the risk of personal or any confidential data being intercepted by allowing the processing of large amounts of data locally. For instance, security cameras enabled with on-device computing can reduce privacy risks by performing an analysis of the video locally to determine the relevant segments of the video to be transmitted to the cloud or data centers. Besides, continued development and enhancements in existing and emerging technologies, such as 5G networks, along with massive growth in consumer electronics and automotive industry, are indeed the major driving factors for the market.

Based on function, the market has been segmented into training and inference. The inference segment is expected to hold the largest market share. As of now, most of the AI training is performed at the data center, while AI inference is executed both in the cloud station and at the edge. However, the cloud station remains an ideal location for training function due to the availability of ample storage of data from multiple servers. Therefore, edge computing is adopted mostly for inference purposes as there is lesser data to be handled while performing inference. 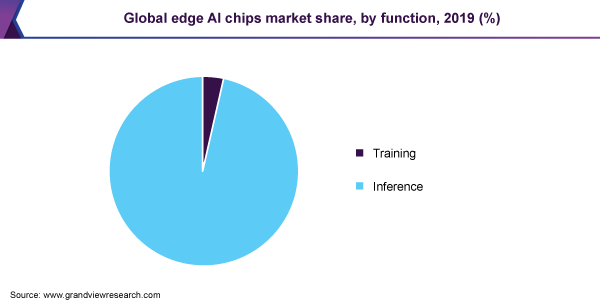 Several major companies prefer the edge-based artificial intelligence computing over cloud computing, which projects a healthy growth rate in the inference workload. For instance, various large companies in the market, namely Apple Inc.; Google; Samsung Electronics Co., Ltd.; Baidu Inc.; and Qualcomm Technologies, Inc., have built their artificial intelligence chips for inference workload, supporting the computing process at the edge. For inference, most edge devices rely on CPU or ASIC processors, with a few applications, such as self-driving vehicles, requiring GPUs. Whereas, for training, the market is evenly divided between ASICs and CPUs.

North America accounted for the largest share in 2019 owing to the strong presence of U.S.-based tech giants, such as NVIDIA, Intel Corporation, Google, Microsoft, Xilinx, Qualcomm Technologies, in the region. North America region is characterized by governments’ increasing focus on having in-house AI applications production and continuous investments in artificial intelligence-related technologies. For instance, in December 2019, according to the National AI R&D Strategic Plan, the Federal government (U.S.) has raised the fundamental AI R&D investments by USD 25 billion. This strategic initiative has taken place to enhance access to high-quality cyberinfrastructure.

Most of the tech giants in the edge AI computing domain are U.S. based, Moreover, several start-ups are working on building new chips for AI, such as Cerebras Systems, a U.S.-based start-up has developed a large computer chip for use in edge-based training. The North American market has witnessed significant growth in the adoption of AI technology in various sectors, such as automotive, manufacturing, healthcare, retail, electronics, and advertising. Such rapid development of AI applications creates opportunities for the market.

Most of these companies are focusing on increasing the customer base by undertaking several strategic initiatives, such as M&A, collaborations, and partnerships. For instance, in January 2020, Apple Inc. completed the acquisition of Xnor.ai, a U.S.-based startup, focusing on edge-based AI tools. This acquisition is anticipated to bring Xnor.ai’s AI-enabled image recognition tools in upcoming iPhones and webcams. Some of the prominent players in the edge artificial intelligence chips market include:

This report forecasts revenue growth at global, regional, and country levels and provides an analysis of the latest industry trends in each of the sub-segments from 2016 to 2027. For the purpose of this study, Grand View Research has segmented the global edge AI chips market report based on processor, device type, function, and region: