The global empty IV bags market size was valued at USD 2.99 billion in 2018 and is expected to grow at a CAGR of 8.1% over the forecast period. The demand for these bags is increasing owing to the environment-friendliness of non-PVC IV bags, rising government initiatives, growing prevalence of malnutrition, and increasing incidence of cancer globally.

Government agencies of various countries are taking several steps to reduce usage of phthalate IV bags wherever possible, without compromising on patient safety. For instance, Denmark introduced a national ban on Di-(2-ethylhexyl) phthalate (DEHP), Dibutyl Phthalate (DBP), Dibp Plasticizer (DIBP), and Butyl Benzyl Phthalate (BBP) under its national phthalate strategy, which was initially set for December 2013 and was later postponed to 2015. The Danish Health and Medicines Authority (DHMA) announced certain set of guidelines pertaining to usage of particular types of phthalates in medical devices. The aim of these initiatives was to ensure continued reduction in use of classified phthalates in medical devices. Similarly, in May 2006, the Federal Institute for Drugs and Medical Devices of Germany issued a recommendation for hospitals to minimize or avoid use of DEHP containing medical devices for specific population groups, such as premature babies, infants, children, adolescents, pregnant women, and nursing mothers. The recommendation necessitates manufacturers to opt for production of alternative products that are PVC-free and nontoxic. Such government initiatives are expected to aid growth of the market during the forecast period. 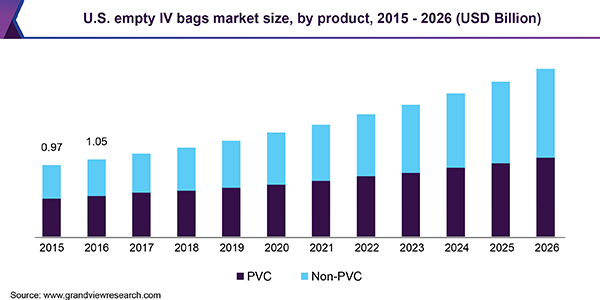 Favorable reimbursement policies in various countries are also anticipated to drive growth. The CMS in the U.S. covers various surgeries and treatment procedures that require IV bags. Similarly, various government agencies in other countries cover some part of treatment procedures, which is expected to increase sales of IV bags. Increasing prevalence of chronic conditions, such as cancer, positively impacts use of parenteral nutrition across the country.

Parenteral nutrition involves administration of vital nutrients that help in maintaining strength, energy, and hydration levels in patients suffering from a disease. According to statistics published by WHO, around 8.2 million deaths occur every year due to cancer, accounting for 13.0% of the deaths worldwide. Moreover, the proportion of cancer cases is estimated to increase by 70.0% over the next couple of decades.

Increasing prevalence of cancer is a high impact rendering driver. Cancer generally results in a rise in the incidence of stomach ulcers, disturbances in normal functioning of the GI tract, and development of physical obstructions, thereby increasing the requirement for parenteral nutrition. Moreover, cancer therapies further weaken the human body and deprive it of nutrients to an extent that it may prove fatal. In addition, a common symptom associated with cancer is anorexia or unintentional weight loss, which needs to be managed parenterally.

On the basis of product, the market is categorized into PVC and Non-PVC IV bags. The Non-PVC IV bags segment dominated the market in 2018. On the basis of materials, the non-PVC market has been segmented into Polypropylene (PP), Copolyester Ether (COPE), Ethylene-vinyl acetate (EVA), and others. The COPE segment is anticipated to witness fastest growth over the forecast period.

COPE for empty IV bags is used in combination with other materials such as polypropylene or other polyolefin resins. It improves strength of the product and imparts more clarity. For instance, Ecdel, trademark product of the Eastman Chemical Company offers transparency, chemical resistance, and toughness. COPE can also be processed on standard injection molding, film extrusion equipment, extrusion blow molding, and profile extrusion. These elastomers are also electron beam, radiation, autoclave sterilization, and ethylene oxide stable.

Based on type, the empty IV bags market is categorized into single and multi-chambered empty IV bags. The single chambered empty IV bags held the largest share in 2018. Single chamber bags are majorly used for common IV solutions, such as drip bags, irrigation fluids, and sterile water. Since these solutions are used at a large scale in hospitals as well as in homecare settings, the segment is expected to dominate the market over the forecast period. However, there are problems associated with plastic, such as leaching and susceptibility to puncture, that may contaminate the contents. 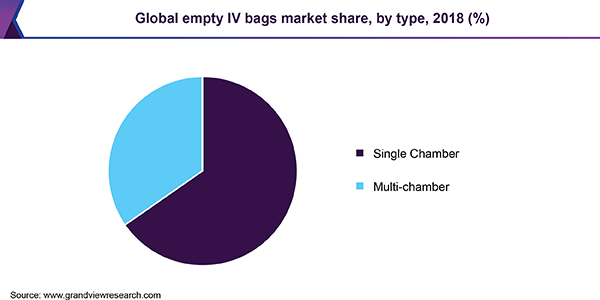 The multi-chambered bags are expected to witness fastest growth over the forecast period. Their usage is anticipated to increase over the forecast period due to advancements in parenteral nutrition systems. The growing demand for customized bags has led to an increase in the number of new entrants in the market. A large number of local manufacturers in Asia Pacific region have begun offering multi-chambered IV bags that can be customized according to size, material, and number of chambers required. Manufacturers of these bags are mostly local players. However, major players such as Baxter International, Inc. are developing products that include fixed mixtures in multi-chambered bags. Growing demand and easy availability of products at competitive prices are among the factors expected to fuel segment growth during the forecast period.

North American region held the largest share in 2018 and is expected to maintain its dominance over the forecast period. The adoption of non-PVC bags in the region is high owing to rising acceptance of innovative healthcare technologies, high disease prevalence, better reimbursement policies, and increasing investments for improving healthcare infrastructure. Rising geriatric population, increasing consumption of unhealthy food, and low awareness are expected to aid growth the regional market.

Asia Pacific empty IV bags market is anticipated to witness the fastest growth over the forecast period owing to increasing healthcare expenditure, rising patient awareness, and growing need for technologically advanced & cost-efficient healthcare solutions. In addition, the demand for medical specialty bags is expected to increase due to rapidly aging population, increasing incidence of chronic diseases, and rising healthcare expenditure. As per Non-communicable diseases (NCD) burden in the South-East Asia Region Regional Action Plan and Targets, 2014 (WHO), approximately 7.9 million people die due to various NCDs in this region. It also reported that cardiovascular diseases, diabetes, and cancer are common in this region.

Some of the prominent market players are Sippex IV Bag; Technoflex; Wipak Group; Baxter; B. Braun; and ICU Medical, Inc. Key players are involved in adopting strategies such as mergers & acquisitions, agreements, product launch, and partnerships to strengthen their position.

This report forecasts revenue growth at global, regional, & country levels and provides an analysis on the latest industry trends in each of the sub-segments from 2015 to 2026. For the purpose of this study, Grand View Research has segmented empty IV bags market report on the basis of product, type, and region.