The Europe gamma butyrolactone market size was estimated at USD 1.10 billion in 2020 and is expected to expand at a compound annual growth rate (CAGR) of 2.7% from 2021 to 2028. The market is anticipated to be driven by the growth of electronic products and organic agrochemicals. The market for gamma butyrolactone in Europe is largely dependent on the trends of its application markets. The high demand for semiconductor devices in various electronic products and electrical vehicles coupled with rising demand for organic agrochemical due to increasing awareness regarding harmful effects of chemical-based pesticides and herbicides are expected to drive the demand over the forecast period. 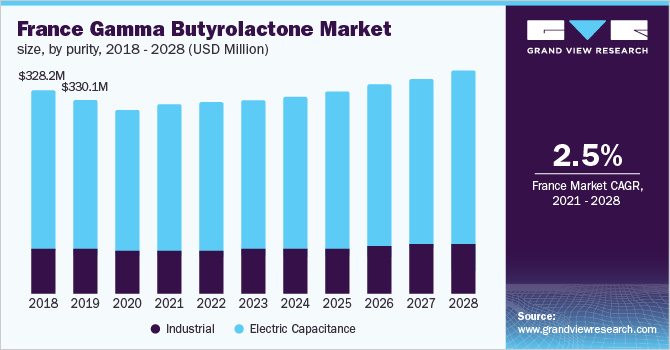 The compound is used as a viscosity modifier for polyurethanes, rubber additives, plant growth regulators, and as a solvent for paint stripping and finds application in a range of industries including agrochemicals, pharmaceuticals, food, and beverages, electrical, petroleum, and others like cosmetics and personal care. The European GBL market has witnessed substantial demand over the past few years owing to the rising consumption of agrochemical chemicals such as pesticides and herbicides due to growing agricultural activities in Europe.

Gamma butyrolactone is mainly manufactured using 1-4 butanediol (BDO) and different types of catalysts including copper, nickel, and others. BDO is subject to intense price and supply volatility in the global market as it is manufactured from butane or liquefied petroleum gas (LPG). Fluctuations in the price and demand/supply of the aforementioned raw materials are expected to hamper the prices of gamma butyrolactone over the forecast period.

The spread of the COVID-19 virus has crippled the European economy and severely impacted the supply chains across industries. The production and consumption of gamma butyrolactone are highly influenced by its demand from end-use industries. Thus, any fluctuations in the demand from end-use industries are anticipated to directly impact the demand for gamma butyrolactone.

In terms of volume, the electrical capacitance segment dominated the market and accounted for a share of 76.5% in 2020. This high share is attributable to the surging demand for compact and technologically advanced electronic devices. The product is used as a solvent for manufacturing semiconductor devices such as op-amps, transistors, capacitors, diodes, resistors, integrated circuits (IC), and electric batteries owing to its high purity level of 900%.

Gamma butyrolactone is used as a solvent in various end-user industries. Growing demand for electronic products in the market due to increasing trends to have compact and technologically advanced devices is expected to boost the demand for gamma butyrolactone in the electrical industry over the forecast period.

Industrial class gamma butyrolactone has a purity level of 99.5%. It is widely utilized as a solvent in various industries. This class of gamma butyrolactone is also used as a key ingredient for formulating final products such as paints and coatings, medicines, and agrochemicals.

Gamma butyrolactone is used for producing organic agrochemicals such as pesticides and herbicides. It is also used as a plant growth regulator and a weed killer. In the pharmaceuticals industry, industrial class gamma butyrolactone is used as a precursor during the formulation of various medicines. The demand for organic pesticides and herbicides is expected to increase in Europe during the forecast period.

In terms of revenue, the electrical application segment dominated the market and accounted for the largest share of 37.0% in 2020. This high share is attributable to the increasing demand for semiconductors devices. The growing demand for semiconductors devices in various electronic products such as television, washing machines, light-emitting diode (LED) bulbs, coupled with growing demand for the electric automobile is expected to trigger segment growth over the forecast period. 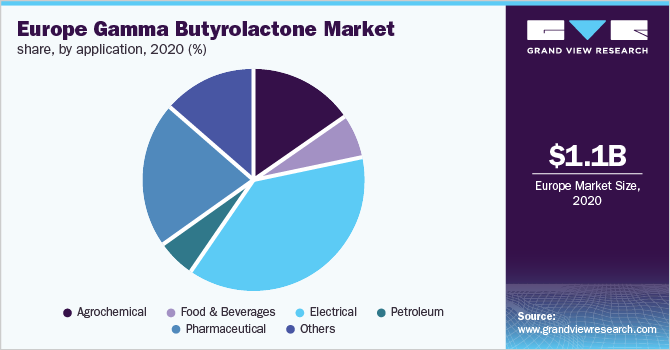 In electrical applications, gamma butyrolactone is used as a solvent to manufacture semiconductors due to its high solubility. Owing to their function and properties, the demand for semiconductors is increasing in the manufacture of a variety of goods including laptops, microwaves, refrigerators, led bulbs, televisions, and washing machines. Thus, increasing demand for electronic goods coupled with surging demand for electrical vehicles is anticipated to propel the demand for gamma butyrolactone in electronics and automotive industries over the forecast period.

Pharmaceutical is the second-largest application segment and accounted for 20.8% of revenue share in 2020. The segment is anticipated to witness a CAGR of 1.9% from 2021 to 2028. Gamma butyrolactone is used in supplements to promote clear thinking, for relaxing the body's muscles, and to release hormones. In the sports industry, it is used in supplements to improve the performance of athletes. Increasing demand for supplements among athletes and youngsters due to the rising trend of fitness and healthy bodies are expected to drive the consumption of the product.

In the personal care and cosmetic industry, gamma butyrolactone is used as a solvent in cosmetics such as nail polish and fragrances. Growing cosmetic product demand due to increasing awareness regarding self-care, especially among the youth, is expected to spur the demand for personal care and cosmetic products, which, in turn, can positively drive product demand in the industry.

France dominated the Europe gamma butyrolactone market and accounted for the largest share of 28.3% in terms of revenue in 2020. The country is anticipated to witness a CAGR of 2.5% from 2021 to 2028. This is attributable to the increasing demand for cosmetics and personal care products coupled with growing agricultural activities. France is the largest producer of agricultural products (both organic and inorganic) in Europe as well as the world’s leading producer and exporter of perfumes and cosmetics.

Along with the growing agricultural and cosmetics and personal care industries, electronics is also one of the major sectors driving the demand for gamma butyrolactone. Increasing efforts by the government to develop innovative and technologically advanced electronic products by launching various schemes and plans such as the Important Project of Common European Interest (IPCEI) on Microelectronics is expected to propel the electronics sector more over the forecast period which will directly boost the demand for gamma butyrolactone.

The demand for the product in Germany has been propelled by rising construction activities and increasing demand for cosmetics and personal care products in the country. Germany is the second-largest market for the product followed by the U.K., Italy, and other European countries.

The country has a leading construction market in Europe. The major factor driving investment in construction industry includes favorable government incentives to develop healthcare infrastructure in the country due to growing elderly population. This is projected to boost construction activities in the country.

Manufacturers including TCI CHEMICALS (India) Pvt. Ltd, and Ashland are selling their products directly through their website to earn more profits. Companies such as BASF SE and Mitsubishi Chemical Corporation are investing more in research and development activities to develop innovative products to widen their product portfolio, which are designed to customize the product to the specific requirements of the customers. Some of the prominent players in the Europe gamma butyrolactone market include:

This report forecasts revenue growth at regional and country levels and provides an analysis of the latest industry trends in each of the sub-segments from 2017 to 2028. For the purpose of this study, Grand View Research has segmented the Europe gamma butyrolactone market report on the basis of purity, application, and country:

How big is the Europe gamma butyrolactone market?

What is the Europe gamma butyrolactone market growth?

b. Electrical application dominated the Europe gamma butyrolactone market with a share of 37.0% in 2020. this is attributed to the high use of GBL as a solvent to manufacture semiconductors due to its high solubility.

Who are the key players in Europe gamma butyrolactone market?

What are the factors driving the Europe gamma butyrolactone market?

b. Growing demand for electronic products due to increasing trends to have compact and technologically advance devices is expected to boost the demand for gamma butyrolactone.