These chemicals are primarily composed of vegetable feedstock such as corn, sugar, and starch. The absence of synthetic feedstock has resulted in a large number of end-use industries preferring these products in fermentation processes. Major manufacturers have shifted their focus toward bio-based raw materials to reduce dependence on petrochemicals. Increasing crude oil prices coupled with growing concerns regarding carbon emissions and the degradability of petrochemical-based products are the major factors driving the shift towards bio-based chemicals. 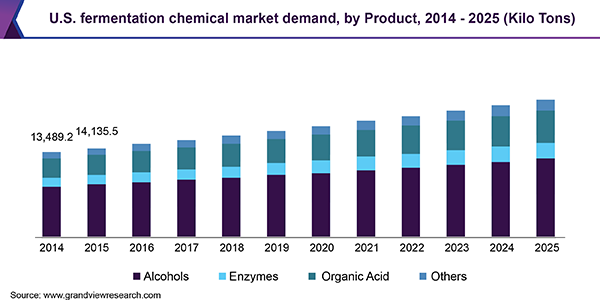 The growth of the pharmaceutical industry, particularly in the U.S., is expected to bolster the market in the country. Increasing research by pharmaceutical companies to develop novel medicines using bacteria cultivation is expected to further drive the demand from U.S. Stringent legislations have been applied by regulatory bodies such as U.S. Environmental Protection Agency (EPA) and U.S. DoE on Greenhouse Gas (GHG) release from chemical factories. This has eventually shifted the focus of industry participants on using biological processes for chemical manufacturing.

Major raw materials used for production include beet, sugarcane, tapioca, wheat, and corn. These agro derivatives are high in starch and carbohydrate contents. The food industry is the major consumer of fermentation chemicals. Increasing population across the globe, especially in Asia Pacific, is expected to boost the demand for food over the forecast period.

Industrial fermentation process for obtaining products such as bioplastics, biofuels, polymers, and composites is highly complex which involves multistep reactions. The conversion employs enzymes or microorganisms such as yeasts and algae, which may be genetically modified, and takes place in bioreactors or fermenters.

Subsequent downstream processing is required to isolate and purify the target products. The development of organic acids and alcohols is a time-consuming process with high holdup time and relatively low yields as compared to synthetic production routes. High capital costs coupled with complex fermentation processes may hinder the growth of the global fermentation chemicals market over the forecast period.

Alcohols, enzymes, and organic acids are the major products. Alcohols are used widely in bread, pickles, cheese, and alcoholic beverages. Increasing alcohol consumption particularly in Asia Pacific markets such as China, Thailand, India, and Australia along with other markets such as Brazil, Montenegro, Mongolia, and the Caribbean is expected to drive growth over the forecast period.

Enzyme consumption is primarily driven by its usage in a wide range of chemical and industrial applications. Enzymes are used as an active ingredient in detergents. Additionally, enzymes find application in biomass pre-treatment for biofuel production. Increasing demand for biofuels on account of rising concerns regarding depleting oil reserves and unstable fuel prices is expected to drive demand for enzymes as a catalyst.

Organic acids are acids with pKa values ranging from as low as 3 (carboxylic) to as high as 9 (phenolic). Technological advancements in fermentation technology have enabled the production of organic acids on an industrial scale. Organic acids such as lactic acid, tartaric acid, and fumaric acid are widely used as preservatives in foods. Their property to inhibit bacterial growth has been a major factor for its use as a preservative. The growing importance of products with a better shelf life is expected to drive demand for organic acids in processed meat and foods.

Fermentation chemicals are mostly for industrial applications. The implementation of green chemistry and various regulations for commercial and industrial applications has resulted in higher penetration. Industrial fermentation is the utilization of fermentation by microorganisms, such as fungi, bacteria, and eukaryotic cells for manufacturing products such as ethanol, citric acid, and acetic acid. Various products derived are applied in the form of additives into food as antioxidants, preservatives, ï¬‚avors, colors, and vitamins, and are found to be more desirable than food additives produced chemically. 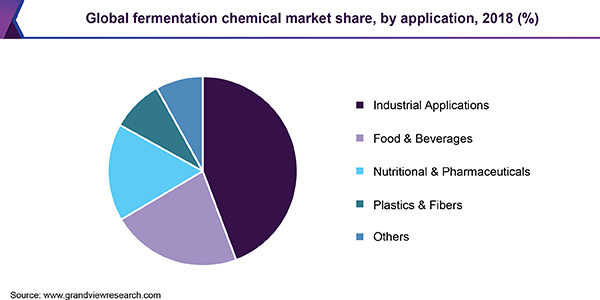 Food and beverages are another application segment where consumption of various fermentation chemicals is done on a wide scale. The rising population across the world is expected to directly influence consumption. Food products traditionally produced through the process of fermenting include dairy products such as kefir, yogurt, sour cream, and cheeses along with supplements such as carotenoids, vitamins, proteins, and ï¬‚avors.

North America is a region characterized by heavy industrialization. The region has a strong presence of major industry participants operating in sectors such as food & beverages, nutrition, and pharmaceutical, as well as plastics and fibers. North America is expected to emerge as the fastest-growing region for the enzymes segment over the forecast period. Increasing demand for enzymes from various industrial applications such as paper, personal care, and starch is expected to have a considerable effect on industry growth.

Demand from Asia Pacific is expected to register a CAGR of 6.5% from 2019 to 2025. The growth of key end-use industries such as food and beverages, pharmaceuticals, and polymers particularly in India and China is expected to remain a key driving factor for the regional market over the forecast period. Increasing per-capita middle-class disposable income levels coupled with growth in the food and beverage industry in countries such as China and India is expected to augment regional demand over the forecast period.

Major chemical manufacturers with a broad portfolio of fermented chemicals include AB Enzymes, Amano Enzymes, Evonik, DuPont, DSM, and Dow Chemical Company. Companies such as Dow and Evonik are further integrated into end-use markets on the basis of product consumption. These companies utilize fermented chemicals to produce plastic resins, excipients, pharmaceutical ingredients, and solvents. Such strategies enable these companies to penetrate new markets and improve their scope of business.

This report forecasts revenue growth at global, regional, and country level and provides an analysis of the latest industry trends in each of the sub-segments from 2014 to 2025. For the purpose of this study, Grand View Research has segmented the global fermentation chemicals market report on the basis of product, application, and region: