The U.S. is among the early adopters of clean energy solutions in the world for sectors such as power generation, manufacturing, and transportation. The U.S. Department of Energy (DOE) and Department of Transportation (DOT) introduced a Hydrogen Posture Plan in December 2006. The aim of this plan was to enhance R&D and validate technologies that can be employed for setting up hydrogen infrastructure. Moreover, this plan provided deliverables that were set by the Federal government to support the development of hydrogen infrastructure in the country. The plan was developed in accordance with the National Hydrogen Energy Vision and Roadmap. Development and construction of cost-effective and energy-saving hydrogen stations across the country is among the key objectives, planned by the government agency. All these factors are expected to propel the demand for the hydrogen generation market in the U.S.

The German Ministry of Transport took an initiative in June 2012 to establish a countrywide hydrogen network and boost the hydrogen infrastructure for hydrogen refueling stations. As part of this initiative, the Ministry signed a letter of intent (LoI) with industry players such as Total, The Linde Group, Air Products and Chemicals, Inc., Daimler AG, and Air Liquide. Under the terms of which these industry players have given a target to construct, at least 50nos hydrogen fueling stations by 2015, in the metropolitan cities and major corridors in Germany.

Coal Gasification held a share of 34.58% in the global Hydrogen Generation Market in 2021. Coal gasification which uses coal as a raw material for producing hydrogen has been in practice for nearly two centuries, moreover, it is also recognized as a mature technology for hydrogen generation. The U.S. has a huge domestic resource in coal. The use of coal to generate hydrogen for the transportation sector is expected to help  America in reducing its dependency on imported petroleum products.

Technologies considered under others segment include electrolysis and pyrolysis process, electrolyzes. Over the last decade, there has been an increase in new electrolysis installation with an aim to produce hydrogen from water, wherein PEM technology is gaining a significant share in the market since the process emits only oxygen as a byproduct without carbon emission. Presently most of the electrolysis projects are in Europe; however, the new and upcoming projects have been announced in Australia, China, and America.

Ammonia production segment led the market and accounted for the largest revenue share of more than 20.28% in 2021. The ammonia production segment will maintain its lead throughout the forecast period. Ammonia’s potential as a carbon-free fuel, hydrogen carrier, and energy store represents an opportunity for renewable hydrogen technologies to be deployed at an even greater scale. Hydrogen is typically produced on-site at ammonia plants from a fossil fuel feedstock. The most common feedstock is natural gas, which feeds a steam methane reforming (SMR) unit. Coal can also be used to produce ammonia via a partial oxidation (POX) process.

The market is estimated to have a steady growth in all segments as the demand for hydrogen increases. Methanol is currently considered one of the most useful chemical products and is a promising building block for obtaining more complex chemical compounds, such as acetic acid, methyl tertiary butyl ether, dimethyl ether, methylamine, etc. Methanol is the simplest alcohol, appearing as a colorless liquid and with a distinctive smell, and can be produced by converting CO2 and H2, with the further benefit of significantly reducing CO2 emissions in the atmosphere. 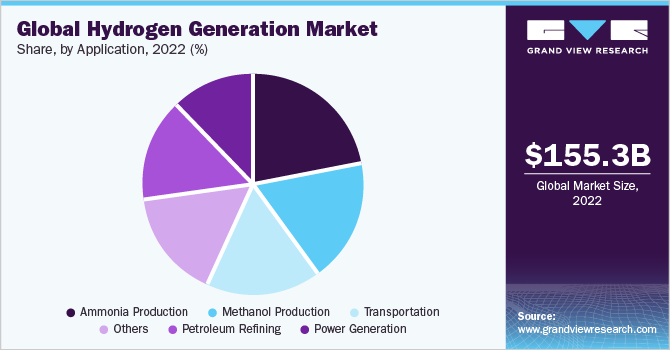 Turning crude oil into various end-user products such as transport fuels and petrochemical feedstock are some of the major applications of hydrogen.  Hydro treatment and hydro-cracking are the main hydrogen-consuming processes in the refinery. Hydro treatment is used to remove impurities, especially Sulphur, and accounts for a large share of refinery hydrogen use, globally. Hydrocracking is a process that uses hydrogen to upgrade heavy residual oils into higher-value oil products.

In source, natural gas segment led the market in 2021. Hydrogen is produced from natural gas reforming which produces hydrogen, carbon monoxide, and carbon dioxide. Hydrogen production from natural gas is the cheapest method of producing hydrogen. It is expected to keep its lead during the forecast period.

Hydrogen producers in the region are looking to expand their geographical reach and target countries like Vietnam, Indonesia, and South Africa among other developing nations, to boost their revenue. U.S.-based market players like Praxair Inc., and Air Liquide are looking to expand their operations in the countries with increasing demand for hydrogen, as part of their strategic growth plans.

The expansion of the hydrogen generation industry in North America has been underway for several years. The industry has grown at a brisk pace with contributions from each application and technology. Methanol production and ammonia production are the fastest growing sector with countries such as the U.S. and Canada, witnessing significant growth in the last five years.

Growth in hydrogen generation is expected in the region on account of the development and deployment of fuel cell systems in Europe which is witnessing an increase due to the projects announced by the European Commission through organizations such as Fuel Cells and Hydrogen Joint Undertaking (FCH JU). These projects have been announced with an objective to increase the adoption of fuel cell vehicles in Europe and this will assist in the development of supportive hydrogen infrastructure for the fuel cell vehicles in the major European countries.

The hydrogen generation market is competitive with key participants involved in R&D and constant innovation done by the vendors. It has become one of the most important factors for companies to perform in this industry. For instance, Matheson Tri-Gas, Inc. acquired Linde HyCO business that produces hydrogen, carbon monoxide, or syngas.

The acquisition is expected to promote the expansion of the company’s capabilities and serve the petrochemical and refining industries. Air Liquide announced that the company will manufacture and market renewable liquid hydrogen to U.S. west coast mobility market. The large-scale project is expected to produce 30 tons of liquid hydrogen per day using biogas technology. Some of the prominent players  in the global hydrogen generation market include:

This report forecasts revenue growth at global, regional, and country levels and provides an analysis of the latest industry trends in each of the sub-segments from 2019 to 2030. For this study, Grand View Research has segmented the global hydrogen generation market report based on the technology, application, systems, source, and region:

How big is the hydrogen generation market?

What is the hydrogen generation market growth?

Which segment accounted for the largest hydrogen generation market share?

b. The Asia Pacific dominated the hydrogen generation market in terms of revenue with the highest share in 2021. This is attributable to rising healthcare awareness coupled with cloud-based technology acceptance and constant research and development initiatives.

Who are the key players in the hydrogen generation market?

What are the factors driving the hydrogen generation market?

b. Key factors driving the hydrogen generation market growth include rising demand for petroleum coke in the steel industry; development in the cement and power generation industries; growth in the supply of heavy oils globally and favorable government initiatives regarding the sustainable and green environment.