The global industrial automation and control systems market size was valued at USD 126.3 billion in 2018 and is expected to witness a CAGR of 8.6% from 2019 to 2025. The market is anticipated to witness significant growth over the forecast period on account of the increasing adoption of process automation across various industries such as automotive, energy utilities, and chemicals. Through automation, the companies are significantly reducing labor and operational expenses, as well as minimizing human errors due to the system’s reliability and efficiency. Moreover, the increasing adoption of industrial robots in the manufacturing industry in order to cater demand of rising population is boosting the market for industrial automation and control systems. 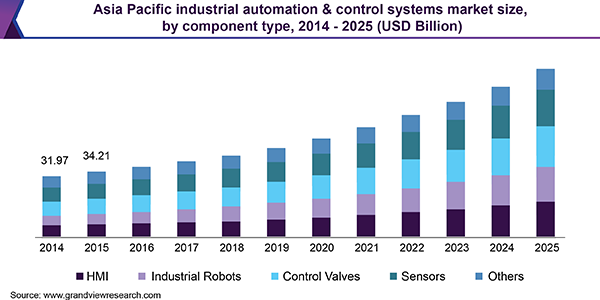 The manufacturers are using various control systems for controlling and optimizing the industrial processes such as metalworking, molding, additive manufacturing, and paint works. The primary control systems include supervisory control and data acquisition (SCADA) systems, distributed control systems (DCS), and programmable logic controllers (PLC). These systems include single or multiple control loops, which are used to automate numerous processes using sensors and meters, without any human intervention. Such processes can be related to controlling temperature, pressure, flow, and level. The control systems are extensively used in industries such as power generation, oil and gas, chemical, pulp and paper, and telecommunications for entire or partial automation.

The market is also expected to grow on account of the government initiatives toward the adoption of industrial automation. For instance, the German government proposed the Industry 4.0 strategy, which focuses on process automation, industrial internet of things (IIoT), cognitive and cloud computing, and artificial intelligence. With this strategy, the factories and manufacturing plants are moving towards Industry 4.0 and implementing smart processes. To achieve this, the factories are now using multiple PLCs that are distributed across the entire manufacturing plant to communicate with each other, rather than having centralized PLC. This is helping the companies to form a communication between all the machinery, thereby creating an ecosystem that can be controlled from anywhere.

The rapid shift of the industries towards smart manufacturing is expected to spur the market for industrial automation and control systems over the forecast period. However, issues such as high implementation costs of the industrial automation systems, privacy and security concerns, lack of regulations and standards pertaining to industry 4.0, along with the downsizing of many labors owing to the automation of processes are some of the major challenges impacting the market’s growth. Moreover, there is a lack of skilled labor and workforce to handle the automation systems, equipment, and machinery; which is impeding the steady growth of the market.

Based on the control system, the market has been segmented into distributed control systems (DCS), programmable logic controllers (PLC), supervisory control and data acquisition (SCADA), and others. The DCS segment held the largest share in the year 2018 in terms of revenue and is expected to dominate the market for factory automation and industrial controls in the next six years. This growth is attributed to the increasing industrialization in developing countries such as China, India, and the Middle Eastern countries. Such developing economies are characterized by increasing government support towards industrialization and the upcoming development plans in the sectors such as power, energy, and utilities.

Factors such as the discovery of new crude oil reserves and the need for enhanced security and safety standards in oil refineries are driving the demand for DCS in the oil and gas industry. However, the adoption of SCADA systems is rapidly increasing from the sectors such as manufacturing, and water and wastewater. The leading companies, such as ABB and Schneider Electric, have an extensive portfolio of SCADA systems. The notable products include Symphony Plus and SCADAvantage from ABB and OASyS SCADA from Schneider Electric. The SCADA control system segment is expected to witness the highest CAGR of 9.6% from 2019 to 2025.

Based on the component type, the industrial automation and control systems market has been categorized into a human-machine interface (HMI), industrial robots, control valves, sensors, and others. The control valves segment held the largest share in 2018 and is expected to maintain its position throughout the forecast period. The significant market share of control valves is attributed to their massive adoption in the oil and gas industry, owing to benefits they offer in terms of pressure and temperature control throughout downstream, midstream, and upstream activities. Additionally, the growing power generation plants across the world and increasing need for energy and power from developing economies are expected to boost the control valves demand from the power generation sector.

Based on vertical, the market has been categorized into aerospace and defense, automotive, chemical, energy and utilities, food and beverage, healthcare, manufacturing, mining and metal, oil and gas, transportation, and others. The manufacturing industry vertical segment dominated the market for industrial automation and control systems in 2018 and is expected to maintain its dominance over the forecast period. Followed by manufacturing, the adoption of industrial automation is high in the food and beverage industry. The companies from the food and beverage industry face pressing challenges, such as product quality, regulatory compliance, supply chain management, and constant process improvement. The food companies are finding ways to increase productivity, improve reliability, reduce waste, and optimize costs through process automation. 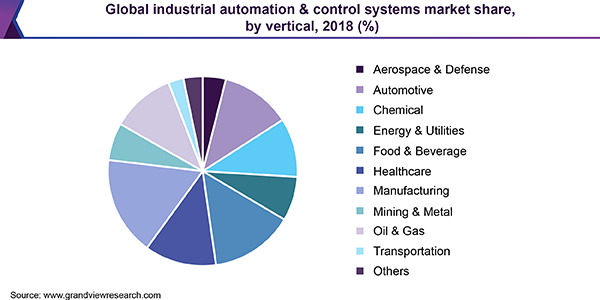 The healthcare segment is expected to exhibit highest CAGR of 9.6% from 2019 to 2025. In April 2019, the leading companies GE Healthcare and Rockwell Automation have collaborated to develop the solutions for automating and digitizing the bioprocessing operations. Similarly, the growth in the chemical vertical segment is estimated to be highest in the Asia Pacific region, owing to the increasing number of chemical plants in the region.

Based on the region, the market for industrial automation and control systems has been segmented into North America, Europe, Asia Pacific, Latin America, and Middle East and Africa. Asia Pacific accounted for more than 30.0% share of the total market in 2018, owing to the presence of the key market players and emerging companies in the region. Some of the notable regional players are Kawasaki Robotics, Mitsubishi Electric Factory Automation, and Yokogawa Electric Corporation. Additionally, Asia Pacific is expected to witness substantial growth, registering the highest CAGR of 11.0% from 2019 to 2025.

The growth of the Asia Pacific region can be attributed to the increasing demand for better solutions to manage industrial plants in countries such as China, India, and South Korea. Followed by Asia Pacific, the North America regional market held a significant share in terms of revenue, and it is expected to grow at a stable rate. The North America regional market is characterized by the presence of numerous manufacturing companies that are leveraging the factory automation systems. Also, the notable rise in research and development activities in the field of IIoT in the region is also likely to spur regional market growth.

The report forecasts revenue growth at global, regional, and country levels and provides an analysis of the latest industry trends and opportunities in each of the sub-segments from 2014 to 2025. For the purpose of this study, Grand View Research has segmented the global industrial automation and control systems market report based on control system, component type, vertical, and region: