The global industrial batteries market size to be valued at USD 27.4 billion by 2027 and is expected to grow at a compound annual growth rate (CAGR) of 6.0% during the forecast period. Rising demand for back-up power in the industrial sector coupled with demand for batteries in grid-level energy storage application is driving the market growth. In addition, extensive usage of these batteries in various applications, such as UPS and motive power, is anticipated to fuel the market expansion. The U.S. accounted for the largest market share in 2019 in the North America regional market and the trend is projected to continue over the forecast period on account of growing product application scope in telecom & data communication, uninterruptible power supply (ups) and others. 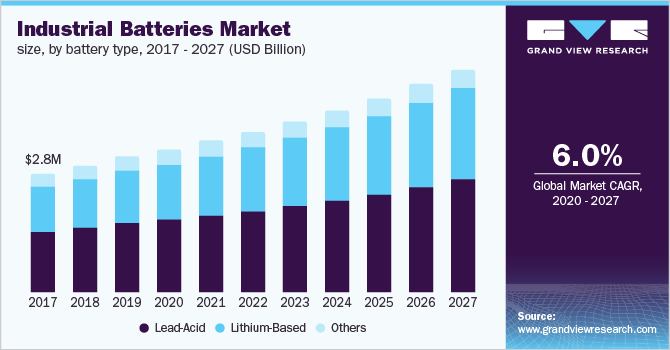 Moreover, the strong presence of major manufactures, such as Exide, Johnson Controls, and Odyssey, in the U.S. is expected to promote market growth in the region over the forecast period. Rising demand for forklift in U.S. and Canada on account of growing manufacturing industry coupled with an increasing number of warehouses will also augment the market growth as lead-acid batteries are used on a large scale for motive power applications, such as forklift in the manufacturing industry.

Favorable government policies for infrastructural development at domestic level through the National Infrastructural Plan (NIP), is expected to promote UPS market growth over the forecast period, which in turn will increase the demand for industrial batteries. However, high capital cost coupled with safety issues related to battery charging and disposal of lead-acid batteries is expected to restrict the market growth to some extent.

The market is predicted to be driven by increased lithium ion batteries usage in the renewable energy industry. They are mostly found in energy storage technologies that store energy generated from renewable energy sources such as wind, and solar.The industry competitors are working to increase the capacity of lithium ion batteries, making them an appealing alternative for fixed energy storage devices.

Lithium ion energy storage devices provide greater energy storage, enabling cost effective integration of wind and solar power into grids.The introduction of grid connected solutions that provide continuous power supply is one of the factors that is expected to drive the growth of the market.

Companies are focusing their efforts on the development of lithium ion batteries.Even though lithium ion batteries are high-end and have a longer lifespan, only a few companies create them. India being a developing and rapidly growing country, imports such batteries since it lacks local manufacturers, which is an opportunity for new entrants.

The alternative battery storage solutions such as fuel cells, super capacitors, and flywheels powered by inverters are becoming increasingly popular as replacements for rechargeable batteries. Both fuel cells and flywheels are now being used in fixed and portable applications to meet power needs.These advances are anticipated to limit the growth of the market.

Lead-acid battery accounted for the largest share of over 47% in 2019 and is estimated to be the dominant segment in the forecast period. Lead-acid batteries find application in Uninterruptible Power Supply (UPS) systems as they provide high power density and enhanced life expectancy. A UPS system is an electrical equipment that provides power supply when the main power or input power sources fail. The high electric manageability of lead-acid batteries is expected to fuel the segment growth over the forecast period.

They are also used in motive industry applications including forklifts on account of their low cost, reliability, and well-established supply chain. Rapid industrialization and a growing number of manufacturing units are expected to propel the segment growth in the future. Expansion of warehouse space, growing e-commerce sector, and high demand for forklift truck replacement along with growing investments by players in emerging economies are also expected to augment segment growth over the next eight years.

Lithium-based product segment is estimated to register the highest CAGR during the forecast period. Lithium-ion batteries are utilized in numerous industrial applications, such as UPS systems, industrial automation systems, and grid-level storage systems. The demand for renewable sources of energy is increasing owing to the depletion of fossil fuel and environmental pollution caused by non-renewable sources. Renewable sources, such as wind and solar, produce variable power and need to be converted into storable forms. Energy Storage Systems (ESS) aid in storing these renewable energy sources for further usage. Thus, increasing usage of ESS is expected to boost the demand for lithium-ion-based batteries over the forecast period.

Motive power emerged as the largest segment in 2019 accounting for over 33% of the global share. The segment will retain its leading position throughout the forecast period due to the wide scope of product application in motive industry applications including forklifts.

Rapid industrialization and a growing number of manufacturing units are expected to propel the segment growth further. In addition, the expansion of warehouse spaces, growing e-commerce sector, and rising demand for forklift truck replacement will support the segment growth over the next eight years. 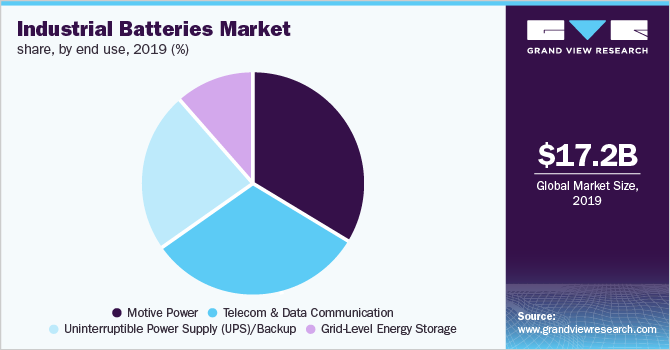 As the growth of this industry gains momentum, new types of business models are expected to be invented and adopted by manufacturers to implement and operate storage assets. This is estimated to further impact the operational ability thus allowing grids to work in a more reliable and cost-effective manner by employing industrial batteries.

Asia Pacific was the leading regional market in 2019 and accounted for over 34% of the global share. It is also estimated to be the fastest-growing regional market over the forecast period owing to a strong industrial base and rise in civil infrastructure activities, especially in China, India, Australia, and several Southeast Asian. Various initiatives by the Indian government are encouraging industrial establishments in the country, which is anticipated to drive the demand for industrial batteries over the forecast period. 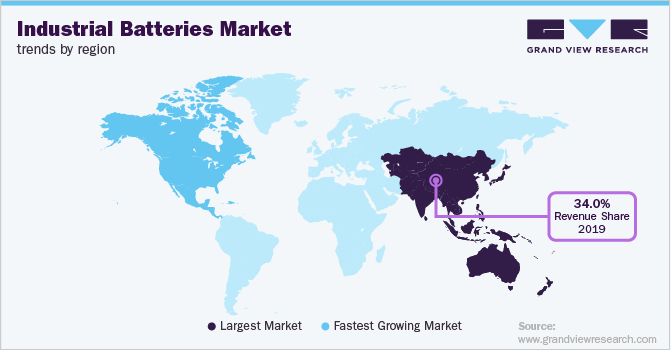 Developing economies in the region have witnessed strong growth in industrial and commercial sectors including IT, telecom, and others, resulting in high demand for industrial batteries for back-up power in these facilities.

North America is projected to be the second-largest regional market wherein the U.S. is the major contributor. This is attributed to the strong presence of key manufactures, such as Exide, Johnson Controls, and Odyssey, in U.S. Robust manufacturing base and rapid growth of the automotive industry in the U.S. will augment the demand for industrial vehicles, such as a battery-operated forklift, which will drive the demand for industrial batteries over the upcoming years.

Key companies in the industry have undertaken various organic and inorganic growth strategies, such as M&A, R&D investments, and product launch, with a view to expand their service portfolio and gain maximum market share.

Some of the prominent players in the industrial batteries market include:

This report forecasts revenue growth at global, regional, and country levels and provides an analysis of the latest industry trends in each of the sub-segments from 2016 to 2027. For the purpose of this study, Grand View Research has segmented the global industrial batteries market report based on battery type, end-use, and region: 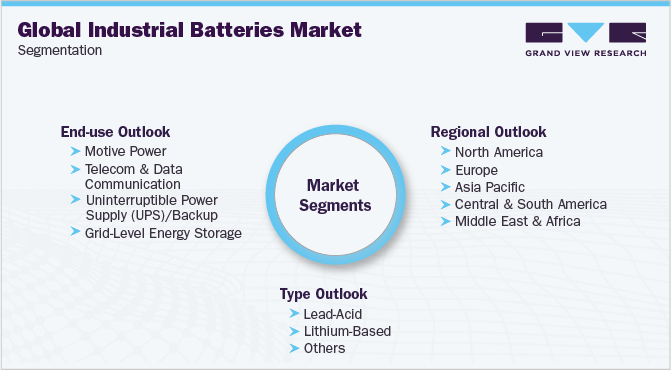 How big is the industrial batteries market?

What is the industrial batteries market growth?

Which segment accounted for the largest industrial batteries market share?

b. The market in North America accounted for the largest market share of 25.93% in the global industrial batteries market, wherein, the U.S. was the major contributor to the Industrial Batteries market in the region. The presence of major lead-acid battery manufacturers such as Exide, Johnson Controls, and Odyssey in the U.S. is expected to promote market growth over the forecast period.

Who are the key players in industrial batteries market?

What are the factors driving the industrial batteries market?