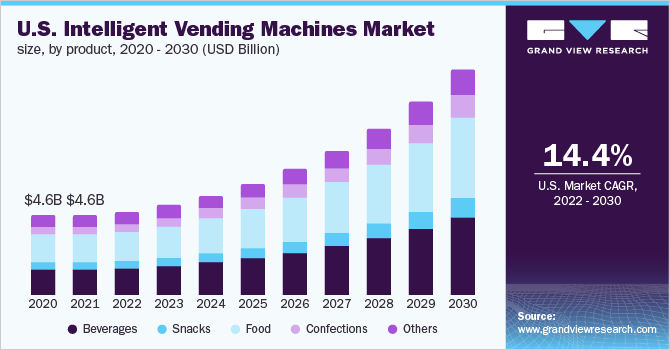 The rising inclination of consumers toward cashless payments is further instrumental in accelerating the industry growth. Protocols for cashless, near-field communication (NFC), and mobile payments are presumed to favorably impact the industry. Technological proliferation is leading to the adoption of innovative techniques, such as face and voice recognition, in dispensing systems.

Machines integrated with face and voice recognition sensors facilitate users by recommending products based on their age and gender. Vendors are accentuating on deploying interactive dispensing systems to generate more profit through advertising and displaying other information and news. Moreover, the systems help in reducing operational costs as they can be managed through remote locations, thereby eliminating the need for intervention by a machine manager.

However, the increasing regulations pertaining to the sale of junk food at avenues such as schools and the prohibition of potentially hazardous confectionery products, such as cigarettes and tobacco, are estimated to deter the market growth. Moreover, the manufacturing and deployment of these machines are a cost-intensive affair, which subsequently affects the vendor interest.

Packaged drinks are estimated to emerge as the fastest growing type segment in the intelligent vending machines market, owing to the increasing focus on healthy vending. The segment mainly comprises packaged drinks such as juice, water, milk, flavored waters, and energy drinks, among others. Consumers are persistently seeking novel packaged drinks that are low in calories and suit the healthy lifestyles and needs.

The market demand for packaged drinks was valued at USD 569.2 million in 2015 and is predicted to grow at a CAGR of 14.8% over the forecast period. The hot drinks type segment accounted for the largest share in terms of revenue in 2015 and was valued at USD 1,534.2 million. A significantly high preference among consumers for instant refreshment and hydration is propelling the demand for the hot drinks segment.

The adoption of vending systems in avenues such as offices is gaining traction. The application segment was valued at USD 575.1 million in 2015 and is presumed to grow at a CAGR of 14.7%. The adoption of these systems at office buildings offers several benefits, such as space conservation, cost-effectiveness, and cleanliness.

The QSR, shopping malls, and retail stores are estimated to dominate the application segment over the forecast period. The segment occupied 12.7% of the total market share in 2015, in terms of volume.

The North American region dominated the market with more than 40% revenue share in 2015. This can be attributed to the rapid adoption of self-services technology and emergence of new business models. Favorable mandates in countries such as the U.S. and Canada, promoting energy conservation, are accelerating the deployment of these systems in the region. Asia Pacific is expected to emerge as the fastest-growing region over the next nine years.

Industry players are increasingly focusing on adopting inorganic growth strategies by acquiring relatively smaller industry participants and other ecosystem players. For instance, in October 2015, Bianchi Vending S.p.A. acquired Brasilia, a manufacturer of espresso machines, to strengthen its hotel, restaurant, and catering sector (HORECA) business that ensures the supply of bars, restaurants, catering companies, and hotels. Market participants are further emphasizing on collaborating with other players to expand and optimize their market share.

This report forecasts revenue growth at global, regional & country levels and provides an analysis on the industry trends in each of the sub-segments from 2014 to 2025. For the purpose of this study, Grand View Research has segmented the global intelligent vending machines market on the basis of type, application, and region:

How big is the intelligent vending machines market?

b. The global intelligent vending machines market size was estimated at USD 5.39 billion in 2019 and is expected to reach USD 6.13 billion in 2020.

What is the intelligent vending machines market growth?

b. North America dominated the intelligent vending machines market with a share of 39.61% in 2019. This can be attributed to the rapid adoption of self-service technology and the emergence of new business models. Favorable mandates in countries such as the U.S. and Canada, promoting energy conservation, are accelerating the deployment of these systems in the region.

Who are the key players in intelligent vending machines market?

What are the factors driving the intelligent vending machines market?