The global leak detection and repair market size was valued at USD 16.15 billion in 2017. It is likely to expand at a CAGR of 5.4% from 2018 to 2025. The Environmental Protection Agency (EPA) introduced the LDAR regulations to reduce emission of volatile organic compounds (VOCs) and volatile hazardous air pollutants (VHAPs) from leaking equipment such as pumps, valves, and connectors in industries such as chemical manufacturing and petroleum refining.

Stringent government regulations and policies and increasing awareness regarding the harmful effects of greenhouse gases on the environment are expected to be the major drivers for the growth of the market. Furthermore, advancements in robotics, unmanned aerial vehicles, and industrial automation are estimated to stimulate the growth of the market. 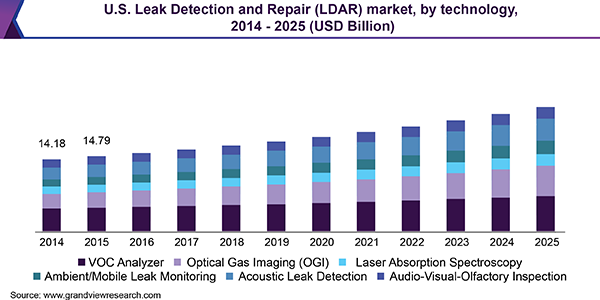 Oil and gas companies are anticipated to include gas leak detection systems as part of their plans for digital transformation. The technology finds applications in the oil and gas industry segments, namely upstream, midstream, and downstream. Due to high-risk operations involved in their field of work, offshore oil and gas facilities are projected to witness considerable adoption of LDAR systems. Expanding oil and gas pipeline networks, especially in North America, Europe, and APAC, is poised to work in favor of the market.

The Association of Oil Pipelines (AOPL) launched the Leak Detection Rupture Monitoring project, under the Pipeline Leadership Initiative to formulate additional strategies for continuous improvements in leak detection. AOPL has also developed performance standards for the industry. However, the need for effective detection and monitoring of methane leakage in multiple components proves to be a challenge for companies.

VOC analyzer is one of the most commonly used technologies for detection of various gases such as hydrogen, oxygen, fluorine, chlorine, bromine, sulfur, and nitrogen, among others. This technology is widely used in Method 21 inspection for the detection of gas leakages. Detector technologies such as photoionization detectors (PID), infrared absorption, catalytic oxidation, and flame ionization detectors (FID) are employed in order to sense presence of a variety of gases, primarily consisting of VOCs.

Optical gas imaging, commonly known as OGI, helps detect industrial gases safely as it can detect a leak from a distance. Owing to several advantages it offers, such as enhanced accuracy and monitoring speed of gas leaks, it is one of the most preferred technologies for leak detection. The technology is projected to witness noteworthy growth over the forecast period on account of increasing requirements in the oil & gas sector for hazardous gas detectors that facilitate safe operations as well as the need to adhere to strict environmental regulations.

It detects various gases, such as methane, propane, carbon monoxide, and hydrogen sulfide. In addition, it helps to scan larger areas for detection of gas leak and has been listed by U.S. EPA as one of the preferred technologies that can be used for leak detection in the oil & gas sector. Besides, these two technologies, acoustic lead detectors are also estimated to account for a sizeable share in the leak detection and repair market

Handheld gas detectors are widely used in the oil & gas sector owing to their portability and cost-effectiveness. These detectors are most commonly used for monitoring pipeline operations and detecting different gases such as methane (CH4), carbon dioxide (Co2), methanal (H2CO), carbon monoxide (CO), and ammonia (NH3). 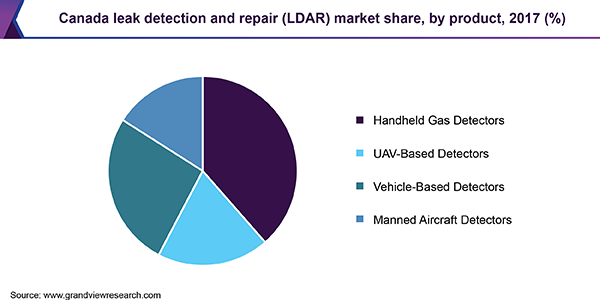 A UAV-based detector is a drone-based inspection product used to locate the source of gas leakages in gas plants, stations, and well sites. It enables operators to view aerial shots of detection area with a laser sensor. Though drones are unstable in windy and harsh weather conditions, they cover a larger area as compared to traditional foot crews. Advancements in UAV platform, sensors, and image processing are anticipated to lead to an increase in commercial use of UAV-based detectors for detection of gas leaks.

North America, followed by Europe, is poised to dominate the market throughout the forecast period. Stringent government regulations and policies along with high adoption of technologically advanced products by companies in these regions have been contributing to the growth of the regional market.

Due to high-risk operations involved in their field of work, offshore oil and gas facilities are likely to witness upswing in the adoption of LDAR systems. Flourishing oil and gas pipeline networks, especially in North America, Europe, and APAC, is anticipated to be the major growth driver of the midstream oil and gas segment.

Players such as GHD Group; Heath Consultants; Chicago Bridge & Iron Company; ERM Group, Inc.; and Guardian Compliance led the market in 2017. Leak detection and repair was introduced by EPA to reduce emission of VOCs and VHAPs.

This report forecasts revenue growth at global, regional, and country levels and analyzes the industry trends in each of the sub-segments from 2014 to 2025. For the purpose of this study, Grand View Research has segmented the global leak detection and repair (LDAR) market report based on product, technology, and region:

How big is the leak detection and repair market?

What is the leak detection and repair market growth?

Which segment accounted for the largest leak detection and repair market share?

b. North America dominated the LDAR market with a share of 52.7% in 2019. This is attributable to the stringent government regulations and policies.

Who are the key players in the leak detection and repair market?

What are the factors driving the leak detection and repair market growth?