The global location-Based entertainment market size is expected to reach USD 1.2 billion by 2018, registering a 32.1% CAGR from 2019 to 2025 according to a new study by Grand View Research, Inc. Increasing consumer spending on games, video content, and end-uses associated with the sale of VR headsets is anticipated to deliver positive growth outlook for the market. In the early days of virtual reality market, there were number of manufacturers present with underdeveloped business models and experimental low-quality content. Nevertheless, with rising demand from game publishers, location-based VR providers have made progress with the large investment in quality improvement and infrastructure.

Over the years, with the powerful underlying shifts in the global gaming industry has moved the market from growth perspective to provide technology driven initiatives. This, in turn, is delivering an increase in strategic deals and enhancing the user experience. In addition, transformative deals offered by the providers across the globe, also encourage small players to invest in the market for location-based entertainment. Further creative technologies and newer concepts with VR expertise thrive the business players to invest more in future. 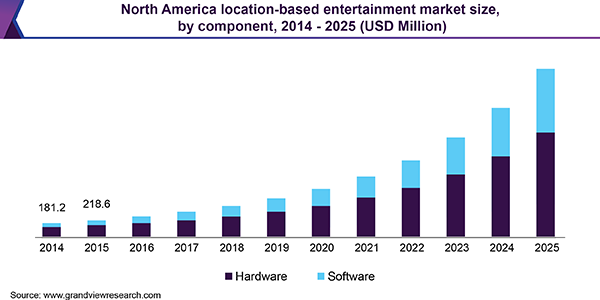 Rising investment in the domestic and international market is expected to boost the market growth in coming years. Amalgamation of augmented reality, virtual reality, mixed reality, and other immersive technologies leads to the more intuitive ways for location-based entertainment services. Further, the hardware and software improvements conform to the requirement by the gaming industry and cater to the up-surging demand for new interfaces with time. Improved component services are expected to open up new possibilities for the entertainment industry.

Growing mass consumer adoption of AR, VR, and mixed reality entertainment services continue to offer high revenue for the market for location-based entertainment. Nowadays, consumers are adapting VR in vastly different manner with the combination of multiplayer oriented interest in business. A significant increase in the creation of more realistic entertainment experience will further engage more consumers and boost the commercial success of the entertainment industry.

Based on component, the market has been segmented as hardware and software. In 2018, the hardware segment accounted for the maximum share in the market for location-based entertainment. The software segment is expected to show high growth in the market over the forecast period. The manufacturers provide both hardware and software-based solutions to create out-of-home virtual reality experience. For instance, in January 2019, location-based entertainment startup Sandbox VR secured USD 68 million investment for software development.

The location-based entertainment system consists of VR gear such as stationary platform to give consumers a simulation of free-range motion. Beyond the initial cost of software and hardware, commercial licenses and standard services of a business, is one of the most-costly factors of operating a VR. This system requires complex free roam setups, which needs more guidance and simple setups. System manufacturers like VRsenal, VRstudios, and Virtuix Omni will continue to increase ease of use for consumers in 2019 to cut costs for the operators.

With the sustainable growth in the gaming industry, the demand for location-based entertainment is expected to account for largest share in the VR/AR industry. As there are mobile headset available in the market withtechnologies to experiencewind tunnel diving, roller coasters, and other activities that are impossible to experience at home. So, amusement parks, theme parks, and other places offering such as entertainment related activities are focusing on implementation of LBE VR to increase excitement rating of their rides and drive more foot traffic. Increasingly, companies are focusing to provide operation-based and end-use-based AR/VR devices in the enterprises.

Based on technology, the location-based entertainment market has been segmented as 2 dimensional (2D), three dimensional (3D), and Cloud Merged Reality (CMR). The three-dimensional segment accounted for the maximum share in the market over the forecast period. 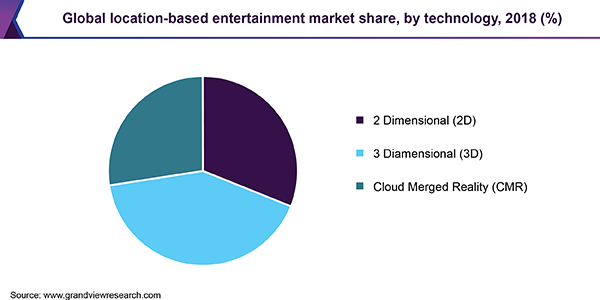 While most industries research and development departments are still trialing with AR and VR, the entertainment industry is already registering a return on investment and sustainable growth owing to the high consumer spending in theme parks and location-based entertainment sites. Integration of 3D technologies in amusement parks and LBE sites is expected to drive the growth of the market over the forecast period. For instance: Ultrahaptics, a U.K. based company, provides three-dimensional shapes and textures with the usage of haptic technology. The company has patented virtual touch technology that uses ultrasound to project texture and shapes onto the user’s hand.

Based on the region, the market for location-based entertainment has been segmented as North America, South America, Asia Pacific, Europe, and MEA. In 2018, North America accounted for maximum share in the market. The regional market is driven by factors such as growing popularity of location-based VR services and the presence of a number of major industry participants. The Asia Pacific region is anticipated to witness the highest growth rate over the forecast period.

In developing countries with increasing consumer spending on amusement activities, the market is anticipated to rise with significant traction. China, India, Thailand, Malaysia, Mexico, and Brazil governments with the increasing tourist activities are looking forward to integrating LBE technologies at most visited tourist places. For instance, in UAE, the Dubai Mall VR Park offers location-based services to its visitors. Some of the malls and theatres are also adapting the same to increase the immersion of the virtual world.

The key industry participants are Exit Reality; Springboard VR; HTC Corporation; IMAX Corporation; The VOID LLC; and VRstudios Inc. As the location-based entertainment system has already gained enough traction from consumers in past few years, there are few top global players currently investing in the market. In addition, the market is considered highly consolidated with top players accounting for maximum from the market. Nevertheless, with growing demand, some of the domestic players have started to invest in this particular segment.

The companies are planning to leverage their market presence in the international market by investing in various entertainment related sub-industries. In 2017, VRstudios, the Bellevue-based VR technology company announced some changes as to focus on setting the global standard for large format LBE market solutions.In 2019, Disneyland Resort and Walt Disney World Resort opened the new Star Wars: Galaxy’s Edge themed areas; these are fully-immersive, surrounding visitors with the sights, sound, and populace of the Star Wars Universe.

This report forecasts revenue growth at global, regional, and country level and provides an analysis of the latest industry trends in each of the sub-segments from 2019 to 2025. For this study, Grand View Research has segmented the global location-based entertainment market report based on component, end use, technology, and region: