Increasing demand for nutritional bars and protein drinks and the rising preference for healthier functional beverages with high nutrient flavors are estimated to drive the market in the years to come. Moreover, support from other regulatory bodies such as the Food Safety and Standards Authority of India (FSSAI) and European Food Safety Authority (EFSA) is estimated to give the market a significant boost over the forecast period. 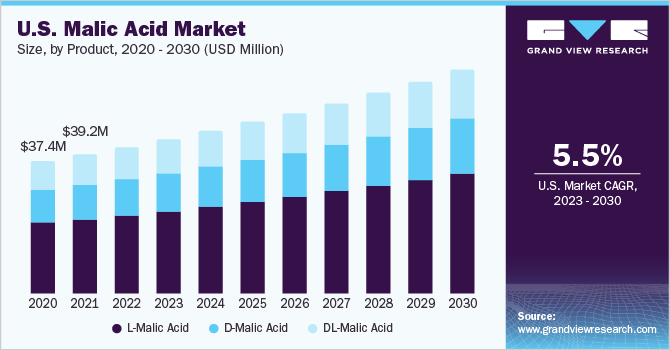 The microbial biosynthesis of malic acid is estimated to create enormous opportunities for market players over the next five years owing to the associated drawback of the petrochemical manufacturing process. However, fluctuating raw material costs and high investment costs for setting up a plant may restrain overall market growth in the future.

The major raw materials used for malic acid include maleic anhydride and fumaric acid, which are petroleum derivatives. Furthermore, the use of environmentally sustainable innovations such as biomass feedstock is a key raw material trend that is estimated to boost industrial growth over the projected period. In addition, FDA approval of malic acid as GRAS is estimated to promote commercialization for food-grade usage of the product.

The global malic acid market is categorized based on end-use into beverages, confectionery and food, and personal care and cosmetics. The beverages segment comprises both non-carbonated and carbonated beverages, including flavored drinks and alcoholic ciders. The segment accounted for the largest market share and is estimated to exhibit a CAGR of 4.6% in terms of revenue over the projected period.

The segment also dominated the global demand owing to the rise in consumption of liquid and powdered beverages, along with surging demand for artificial flavorants in carbonated drinks. The segment is followed by confectionery and food and personal care and cosmetics segments owing to rising per capita disposable income in the developing markets of Asia Pacific.

Confectionery and food is the second largest segment and is estimated to register a revenue-based CAGR of 5.6% over the forecast period thanks to changing eating habits and food preferences. In North America, the segment accounted for a significant revenue share in 2018 owing to the high demand for malic acid in end uses like processed food and hard candies.

In terms of revenue, the global demand for malic acid in the personal care industry was valued at USD 9.5 million in 2018 and is estimated to gain substantial market share by 2025. In Asia Pacific, the personal care industry is estimated to exhibit a CAGR of 6.0% over the forecast period owing to rapid industrialization and increasing disposable income.

Globally, Asia Pacific accounted for 43.8% of total market demand in 2018 and is estimated to register a revenue-based CAGR of 5.9% over the projected period. The reason behind overall market growth is the growing population, increasing preference for food acidifiers to enhance the shelf life of end uses, and the presence of key international chemical cluster industries for the supply of raw materials.

Developing countries like India and China are major consumers of malic acid in this region owing to developing ready-to-drink and processed food sectors. North America emerged as the second leading regional market and is estimated to exhibit a revenue-based CAGR of 5.1% over the projected period thanks to the high demand for bakery and confectionary end uses. 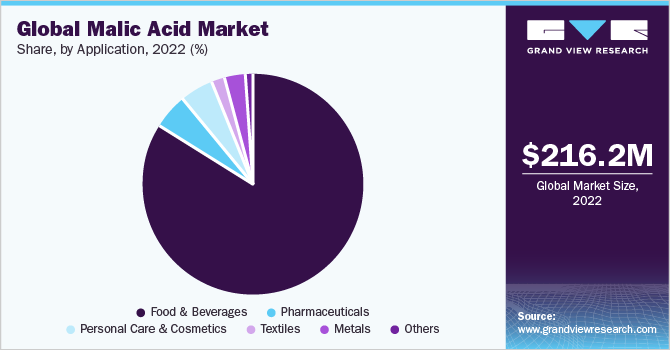 The U.S. dominated market in this region as an increasing number of consumers focus on specialty personal care and cosmetic end uses. Moreover, rising demand for ready-to-drink tea, carbonated refreshments, energy drinks, and sports drinks, as well as the introduction of several low-calorie beverages in the market are estimated to boost overall growth in North America.

Key players are concentrating on acquisitions and mergers as their major strategy to expand their global customer base. For instance, Fuso Chemicals Co. Ltd and Mitsui Chemicals have entered into an agreement where Chemicals Inc. has agreed to transfer its organic acids business to Fuso Chemical Co Ltd.

This report forecasts revenue growth at global, regional, and country levels and provides an analysis of latest industry trends in each of the sub-segments from 2014 to 2025. For the purpose of this study, Grand View Research has segmented the global malic acid market report based on end-use and region: