The global malt ingredients market size was valued at USD 19.79 billion in 2018 and is expected to grow at a compound annual growth rate (CAGR) of 5.3% from 2019 to 2025. Rapid growth of the malt beer market on a global level is expected to be the key driving factor for the product demand. Furthermore, increased importance of malt extracts as functional ingredients in the formulation of confectionary and nutritional drinks on account of their vitamin-B and essential amino acid and fiber contents is projected to drive the demand. 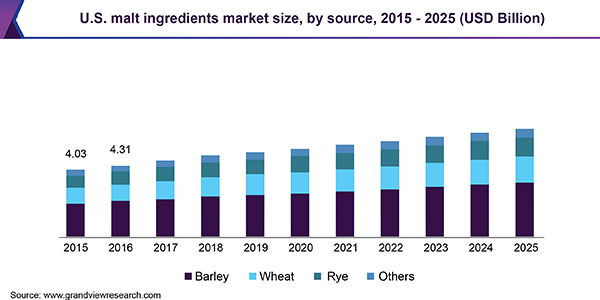 Over the past few years, non-alcoholic malt beverages have gained significant popularity in the Middle East region due to stringent regulations imposed on selling and distribution of alcoholic beverages. As a result, the number of non-alcoholic brewing firms has been increasing in the region. In addition, manufacturers are also focusing on the development of new products, in terms of flavors, such as pomegranate, raspberry, and peach.

Increasing demand for craft beer in the U.S., China, Germany, and France is further expected to boost the product demand in the beverages sector. Over the past few years, the number of microbrewers has increased significantly in these countries. According to studies, the number of craft breweries in the U.S. crossed 7300 in 2018.

Barley source segment held the largest share of the global market in 2018. Barley is the most common grain used in alcohol production as it has high starch content, enzymes to transform the starch to sugar, and proteins for yeast health. Color of beer depends on the quality of barley used. Furthermore, over the past few years, barley has been gaining importance in the bakery and confectionery industry. Rising awareness about the health benefits of barley, such as low risk of diabetes, hypertension, and diarrhea, is expected to boost its demand in bakery products, thereby augmenting the segment growth.

The beverage application segment led the market in 2018 accounting for more than 80% of the overall share. Alcoholic beverages was the major application in the beverage segment as malt ingredients are important raw material in alcohol production. Growing demand for craft beer across the globe has been fueling the product demand in this segment. Introduction of new beer flavors, such as raspberry and peach, is expected to boost the demand further. Moreover, the number of small and independent breweries has increased significantly in U.S. over the past few years. Thus, rapid expansion of the alcoholic beverage market will fuel the segment development. 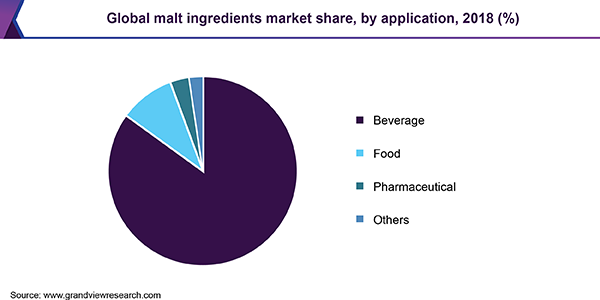 The food application segment accounted for a significant share of the global market revenue. Over the past few years, the diastatic malt has gained significant popularity in the bakery industry as a substitute for honey and sugar. Thus, increasing demand for sugar-free bakery products across the globe is expected to widen the application scope for the product. Furthermore, malt is a good source of enzymes and vitamins and also helps extend the shelf life of final products. Malt flour is being widely used in the production of biscuits, cookies, and pastries. Thus, rapid growth of the confectionary industry, especially in developing countries like India, Pakistan, and Brazil, is will have a positive impact on the segment expansion.

Europe held the largest share of the global market in 2018 as a result of the presence of a large number of breweries in countries including the U.K., Germany, Spain, France, Italy, Netherlands, and Switzerland. The region will retain its dominant position over the forecast period due to rising popularity of craft beers in the Eastern European countries, such as Russia and Poland. However, the malt ingredients market in Asia Pacific is projected to register the maximum growth rate from 2019 to 2025. Middle East & Africa is expected to witness a significant growth in near future. Manufacturers in this region are introducing innovative flavored non-alcoholic malt beverages, which is expected to be the key factor driving the region’s growth

Most of key companies are focusing on expanding their production capacities to cater to the potential markets of Asia Pacific and Middle East & Africa. For instance, in September 2018, Malteurop Group expanded its capacity from 80 to 200 thousand tons of production unit. Some of the prominent players in the malt ingredients market include:

This report forecasts revenue growth at global, regional, and country levels and provides an analysis of the latest industry trends in each of the sub-segments from 2015 to 2025. For the purpose of this study, Grand View Research has segmented the global malt ingredients market report on the basis of source, application, and region:

How big is the malt ingredients market?

What is the malt ingredients market growth?

Which segment accounted for the largest malt ingredients market share?

b. Europe dominated the malt ingredients market with a share of 37.3% in 2019. This is attributable to the presence of a large number of breweries in countries including U.K., Germany, Spain, France, Italy, Netherlands, and Switzerland. The region will retain its dominant position over the forecast period due to rising popularity of craft beers in the Eastern European countries, such as Russia and Poland

Who are the key players in malt ingredients market?

What are the factors driving the malt ingredients market?

b. Key factors that are driving the market growth include the increasing importance of malt extracts as functional ingredients in the formulation of confectionery and nutritional drinks on account of their vitamin-B and essential amino acid and fiber contents