The global matcha market size was valued at USD 2.62 billion in 2016 and is expected to witness a growth at a CAGR of 7.6% from 2017 to 2025. Matcha tea was initially known as an integral part of Japanese culture. Growing health consciousness, coupled with consumer awareness regarding the health benefits of the product, is expected to drive the market over the forecast period.

Matcha tea is available in the powdered, vibrant, green-colored form, and is produced majorly in Japan from shade-grown premium-quality tea leaves. It originated in China during the Tang dynasty and was majorly consumed by Buddhist monks, samurai warriors, and the Japanese population. Excellent health benefits of the product have fueled its popularity across the globe.

The U.S., Canada, Germany, the U.K., France, and Australia have been identified as the key consumers, globally. Beverages and food items formulated using the product have gained wide consumer acceptance in developed countries, owing to their unique taste and flavor. The rising prevalence of chronic diseases such as obesity, diabetes, and cancer have propelled the demand among health-conscious consumers in the U.S.

The product has a high content of antioxidants, vitamins, minerals, and amino acids. The oxygen radical absorbance capacity (ORAC) count of the product is estimated to be 1,384 units per gram, which is higher than the average ORAC count of 94 units per gram of other nutritious fruits and vegetables, such as pomegranates, goji berry, walnuts, broccoli, spinach, and blueberries.

The anti-oxidant composition of the product enables it to prevent various chronic diseases and provide protection from the harmful effects of UV radiation. The antioxidants present in the product, known as EGCG (epigallocatechin gallate), have the ability to prevent various types of cancer including brain, bladder, prostate, and cervix. It prevents the proliferation of malignant cells and thus regulates angiogenesis and metastasis.

The amino acid content in the product is approximately five folds higher than regular black and green tea. The amino acid ‘L-theanine’ present in the product has the potential to reduce stress and promotes a state of relaxation; enhance mental alertness and mental calmness; and prevent chronic diseases, including type-2 diabetes and gastrointestinal problems.

The superior health benefits of the product have accelerated its acceptance among consumers across the globe. The worldwide incidence of lifestyle diseases has motivated consumers to increase the intake of healthy and nutrient-rich food and beverages in their diet. This, in turn, is expected to augment the product demand owing to their nutrient composition.

The popularity of the product has spread from Japan to the developed countries of North America, Western Europe, and the Asia Pacific, mainly driven by health benefits. In addition to conventional consumption as regular tea, the product is being increasingly used in the formulation of various beverages and foods, promoted by retail chains of cafes, restaurants, and tea shops.

The product is significantly more expensive than its other counterparts, owing to its premium production process. The product is obtained from shade-grown tencha leaves of the plant called Camellia sinensis. The tea plants are cultivated only in Japan, owing to the distinct soil and environmental conditions in the country. Uji in the Kyoto region and Nishio in the Aichi region are the major cultivators of tencha in Japan. Cultivation under stringent conditions, premium extraction process, and careful grinding and processing attribute to the high price of the product.

The classic grade accounted to be the largest segment of the matcha market, accounting for 56.2% share of the global revenue in 2016. The segment is expected to exhibit a steady growth rate of 7.9% from 2017 to 2025. The segment is estimated to continue as the leading segment over the forecast period.

The classic grade is rich in nutrients and suitable for applications, including regular tea and other matcha tea-based beverages. The grade is consumed by both regular drinkers and new users. The subtle fresh flavor of the grade has fueled its popularity among consumers. The grade has a lower price than that of the ceremonial grade, however, it is more expensive than the culinary grade.

Culinary grade is projected to witness the fastest growth rate over the forecast period, owing to the emerging use of this grade in various cooking products. The smooth texture and high nutrient content have encouraged the usage of this product grade in the preparation of various desserts, smoothies, lattes, and other food items.

Economical price, excellent taste, and unique flavor are some of the key factors to have driven the demand for a culinary grade in food & beverages in recent years. Product penetration in developing countries is expected to positively impact the overall product demand over the forecast years.

Matcha has broad usage in regular tea, beverages, food, and personal care. Regular tea was the largest application segment of the matcha market in 2016, accounting for over 56% share of the global market revenue. Product consumption as regular tea ensures an optimum intake of nutrition-rich ingredients. Increased purchasing power and influence of Japanese tradition have boosted the product usage in regular tea. 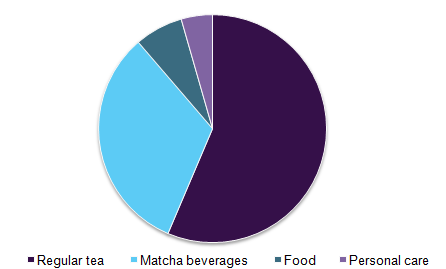 The product is employed in the formulation of foods including cakes, cookies, pastries, yogurt, ice creams, pasta, cereals, energy bars, chocolates, and candies Food is estimated to be the fastest-growing segment over the forecast period, owing to rising demand for healthy food products. The bitter taste and malty flavor have encouraged its usage in various food recipes.

The Asia Pacific was the largest regional market in 2016, owing to the significant popularity of green tea in Japan and China. The Asia Pacific accounted for approximately 64% of the global industry revenue. Ancient traditions associated with tea in Japan and China were the major contributor to the product industry concentration in the Asia Pacific. Furthermore, countries including Australia, Singapore, and India are anticipated to emerge as potential markets, owing to growing health awareness.

North America accounted for the second-largest share of the overall industry revenues and is estimated to expand at the fastest growth rate over the forecast period. The product emerged in the North American industry through Japanese grocery chains. The North American industry was majorly driven by the growing demand in the U.S. Cities including Los Angeles, New York, and Miami have a significant number of cafes and restaurants offering matcha-based food and beverages. The market in the U.S. has experienced promising growth in the recent past and is expected to continue with the growing trend over the forecast period.

Europe was another key consumer in the global industry, owing to the rising demand for healthy products in Germany, the U.K., and France. Consumers based in Western European countries have exhibited a preference for nutritious drinks with detoxifying and energy-boosting properties. Growing awareness regarding health advantages such as anti-aging properties, protection from cancer and diabetes, low calorie, and energy stimulation has resulted in bolstered demand for matcha tea in Europe.

The key players in the industry include AIYA America, The AOI Tea Company, Ippodo Tea Co., Ltd., DoMatcha, Encha, Midori Spring Ltd., and Vivid Vitality Ltd. Several companies are strengthening their positions in the overall industry through the introduction of new products to meet the rising demand from food & beverage chains.

The companies operating in the industry focus on achieving optimum product quality. Furthermore, the companies aim to organize various events and workshops to educate customers about the beneficial properties of the product. The events demonstrate the preparation of different recipes using matcha tea to fuel consumer awareness.

This report forecasts volume and revenue growth at global, regional & country levels and provides an analysis of the industry trends in each of the sub-segments from 2014 to 2025. Grand View Research has segmented the matcha market by, application and region.

The demand for matcha is increasing owing to their superior nutritional as well as immunity-boosting properties. Furthermore, the consumer mindset to follow a healthy lifestyle particularly in these testing times is further expected to enhance the demand for superfoods during the COVID-19 outbreak. We at GVR are trying to quantify the impact of this pandemic on the matcha market. Get your copy now to gain deeper insights on the same.