The global dietary fibers market size was valued at USD 3.31 billion in 2015. A large number of benefits are associated with the consumption of fiber including maintenance of bowel health, lowering of cholesterol levels, and controlling blood sugar levels, among others. These advantages, coupled with growing functional food industry, are expected to play a key role in the growth of this market over the forecast period.

As seen in the below figure, whole grain products were the largest sources of dietary fibers in the U.S. in 2015. This domination is attributed to a change in lifestyles and shift in preferences of consumers from flour to whole grain products. For instance, whole wheat bread has witnessed an increase in demand in the U.S. at the expense of wheat flour bread. 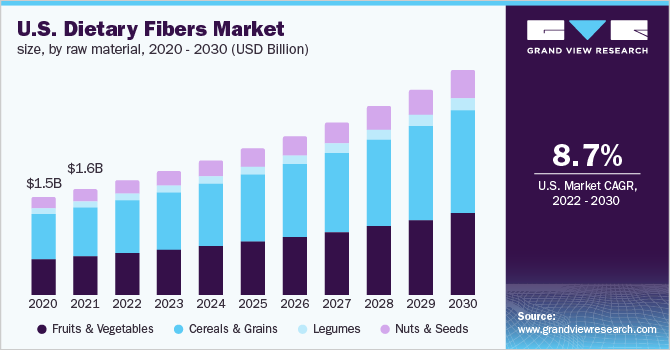 Some of the major sources include whole grain products, fruits & vegetables, other sources, which include soy, nuts, and legumes. Whole grain products are projected to dominate the dietary fibers market and are expected to register the highest CAGR of over 14% by value, from 2016 to 2025 courtesy high fiber content and ease of availability across all regions.

Fruits & vegetables accounted for over 30% of the market in terms of value, in 2015. Fruits such as purple passion fruit, metamucil, orange, figs and vegetables such as sweet potato, avocado, and turnip, among others are known to contain high levels of fibers. Growing awareness about the importance of consumption of these fruits and vegetables in the everyday diet is expected to play a key role in the growth of this sub-segment over the forecast period.

Dietary fibers are segmented on the basis of product into soluble and insoluble. This segment was dominated by insoluble fibers, which pass through intestines, without forming a gel-like substance. They also exhibit other benefits such as maintaining pH balance in the intestines, courtesy which, they are expected to grow at the highest CAGR of over 13% in terms of value, from 2016 to 2015.

Soluble fibers accounted for over 30% of the market, by value in 2015. Some of the major advantages of these products including reduction of cholesterol levels and keeping blood sugar levels normal, thus, preventing diabetes are expected to help the segment grow over the forecast period.

As seen in the below figure, dietary fibers found the widest application in the food segment in 2015 with a market size of over USD 1 billion. This growth was attributed to increasing awareness about the importance of fibers in daily meals as well as the tremendous growth of the functional food industry. 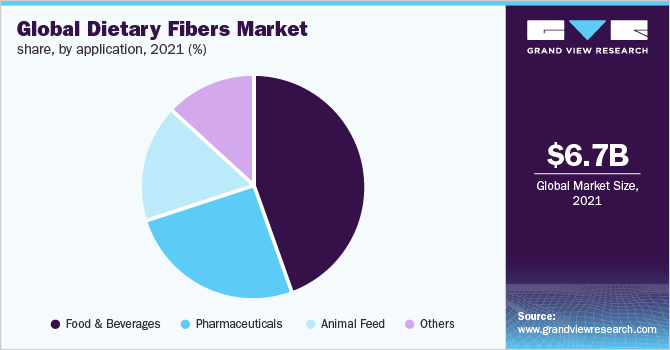 The beverages segment held the second-largest market share of over 30% in 2015, by revenue. Growing demand for energy and sports drinks was the major driver for this application segment in the same year.

Asia Pacific dominated the global dietary fibers industry demand with a revenue share of over 35% in 2015. This region is also projected to witness the highest CAGR over the next nine years. Growing food & beverage industries, coupled with an increase in demand for pharmaceuticals and medicines, have provided the necessary boost to the industry in this region.

North America was the second-largest market and was valued at over USD 800 million in 2015. This region is expected to be driven by growing demand for fibrous foods from the U.S. Major players such as Cargill Incorporated, Archer Daniels Midland Company, Ingredion Incorporated, and DuPont are based in this region.

Cargill, Incorporated, one of the largest agri-business companies in the U.S., was the market leader in the global dietary fibers industry, in terms of revenue, technology, contract price, and reliability of product track record. Other few major companies, Archer Daniels Midland Company, Lonza Group AG, and Nexira also held predominant positions in the market.

Cargill Incorporated was founded in 1930 and had over 150,000 employees as of 2015. Apart from dietary fibers, the company’s product and service offerings include grain, sugar, cotton, financial brokering, food processing, animal feed, and pharmaceuticals, among others.

Although the U.S. accounts for around 35% of the company’s annual revenues, its development strategies include expansions and investments in the Asia Pacific region. In December 2016, it opened a new food innovation center in China, which employed nearly 50 scientists, researchers, and nutritionists. This expansion helped the company maintain its hold on the emerging Chinese market, consequently strengthening its position in Asia Pacific.

This report forecasts revenue and volume growth at global, regional & country levels and provides an analysis of the industry trends in each of the sub-segments from 2014 to 2025. For the purpose of this study, Grand View Research has segmented the global dietary fibers market on the basis of source, product, application, and region: