The global metabolic disorder therapeutics market size was valued at USD 49.65 billion in 2017 and is expected to register a CAGR of 7.56% over the forecast period. Increasing demand for one-time therapies for metabolic disorders and the rising prevalence of lifestyle diseases are the key factors that are expected to boost the growth of this market. Various governments and healthcare associations around the world have estimated that more than half a billion individuals are to be affected by obesity and diabetes by 2040. Also, rising incidences of inherited metabolic diseases due to changing lifestyles are likely to propel the market growth. 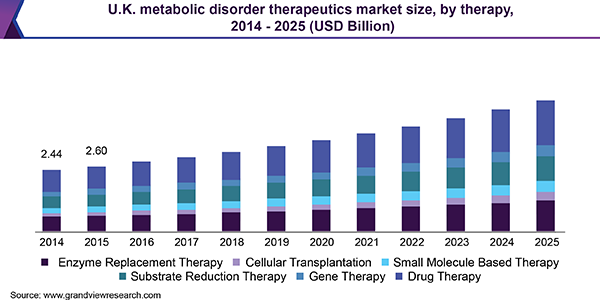 As has been observed in recent years, the cases of diabetes have been increasing and many of the countries might face a potential metabolic disorder epidemic. Many of the industrial countries are concerned with the chronic obesity epidemic with the U.S. leading in the number of obese cases. In the U.S. alone, an obese person on average spends around USD 1500 on medical expenses.

Over the years, the global economic condition has improved, especially in developing countries, which have a high number of cases of metabolic diseases. Researchers are urging governments across the globe to take action and come up with studies and solutions to reduce obesity and diabetes. For instance, scientists say that one in three individuals is obese and there have never been reports stating the reduction in obesity numbers. These factors are driving obesity segment growth.

Other factors that are propelling the market growth are the rapidly aging population, sedentary lifestyles, and increasing cases of smoking and other metabolic pathway restricting practices. Diabetes has become a global epidemic with more than 5% of the population affected by the disease requiring constant medication to battle certain fatal conditions. For instance, in 2016, around 1.5 million deaths occurred directly due to diabetes.

Based on disease, the market is categorized into diabetes, lysosomal disorders, hypercholesterolemia, obesity, and inherited metabolic disorders. These diseases are mostly inherited from the older generation through a faulty gene and some show immediate effects like the lysosomal disorders, while some show up later due to aging. For instance, diabetes might not be diagnosed up to a certain age.

Diabetes was estimated to be the largest segment in 2017 due to the wide usage of metabolic disease therapies in anti-diabetic drugs and injections to control the blood sugar levels. In diabetes, constant ingestion of metabolic regulators is essential. This factor makes it the largest revenue-generating segment. However, the obesity segment is expected to witness the fastest growth over the forecast period due to increasing lifestyle changes and unhealthy eating habits.

The therapy segment is further categorized into enzyme replacement therapy, cellular transplantation, substrate reduction therapy, small molecule-based therapy, gene therapy, and drug therapy. Except for drug therapy, all the other therapies are novel and cutting-edge, which makes then more effective in treating metabolic diseases. However, the downside of these therapies is high costs and a lack of solid scientific backup. For instance, enzyme replacement therapy costs around 300,000 per year as the treatment should go on continuously at least once or twice a week.

Thus, drug therapy held the highest market share due to its extensive usage as a result if ease of administration and high-reliability rate. This therapy is expected to maintain its growth even during the forecast period owing to its advanced ways of administering medications without disturbing day-to-day patient lives. Moreover, the introduction of smart drug delivery devices and smart dosage control methods are projected to drive the segment further. 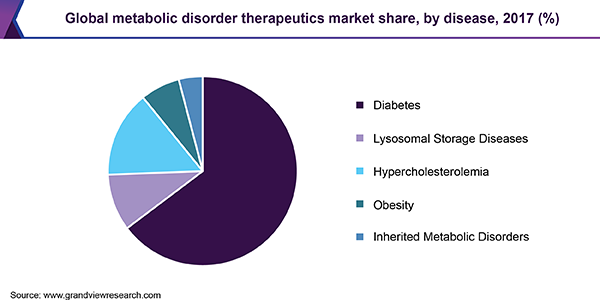 The other segment is also likely to witness significant growth over the forecast period as researchers are continuously striving for better medication and therapy that can eliminate the need for lifelong diagnosis and multiple dosage therapy. In recent years, due to the advances in diagnostics, greater emphasis on groundbreaking therapies, like gene therapy, has been observed. This is projected to lead the segment growth shortly.

North America is the dominant region of this market due to the presence of major companies. Increasing prevalence of obesity and diabetes in the region is another factor responsible for its largest share. High healthcare expenditure and rising awareness about metabolic disorders are expected to drive the regional market further.

Asia Pacific is said to witness the fastest CAGR of 8.27% during the estimated time owing to the rapid economic development in this region. Changing lifestyles, leading to a rise in obesity, diabetes, and hypercholesterolemia diseases, along with increased disposable income levels are driving the APAC market.

Expansion of product portfolios and M&A are the key strategies undertaken by most of these companies. For instance, in 2017, Boehringer Ingelheim, in collaboration with Eli Lily and Company, had announced positive data about the clinical development of Jardiance for the reduction of cardiovascular deaths in adults with type 2 diabetes and peripheral artery disease.

This report forecasts revenue and volume growth at global, regional, and country levels and provides an analysis of the latest industry trends in each of the sub-segments from 2014 to 2025. For this study, Grand View Research has segmented the global metabolic disorder therapeutics market report based on diseases, therapy type, route of administration, and region:

How big is the metabolic disorder therapeutics market?

b. The global metabolic disorder therapeutics market size was estimated at USD 56.93 billion in 2019 and is expected to reach USD 61.10 billion in 2020.

What is the metabolic disorder therapeutics market growth?

Who are the key players in metabolic disorder therapeutics market?

What are the factors driving the metabolic disorder therapeutics market?

b. Key factors that are driving the market growth include increasing demand for one-time therapies for metabolic disorders and rising prevalence of lifestyle associated diseases such as diabetes.