The global metagenomics market size was estimated at USD 409.26 million in 2017. Investments in development of bioinformatics platforms to support metagenomics and microbiome profiling are anticipated to drive the market. Growing interest of researchers in associated novel research areas such as metatranscriptomics, metaproteomics, and metabolomics has also encouraged microbiologists to explore associated workflows.

Scope for usage has widened in recent years and diversity of ecosystems explored using metagenome analysis has increased by multiple folds over the recent past. Rapid advancements in genomic technologies and ancillary protocols have enabled the study of microbial consortia within the host as a combined entity. This is anticipated to hold significant market potential in various life sciences industries. Introduction of high-throughput sequencing technologies such as iSeq 100 System, MiniSeq System, and NextSeq 550 System for amplicon sequencing has facilitated phylogeny and taxonomy studies of diverse metagenomics samples.

Bioinformatics companies play a significant role in the growth of metagenomic laboratories as they help support their workflows. For instance, in December 2018, QIAGEN launched metagenomic plugins for analysis in collaboration with CosmosID. Furthermore, De novo assembly, whole genome sequencing, shotgun metagenomics, and 16S rRNA sequencing allow simplified analysis. This increase in deployment of sequencing technologies can be attributed to declining cost in recent years.

Innovative methodological and conceptual tools such as Integrated Microbial Genome/Microbiome (IMG/M) are employed to accelerate metagenomics related workflows, thereby boosting revenue generation. IMG/M is useful in analyzing the functional capability of microbial communities based on the metagenome sequence.

Furthermore, advancements in bioinformatics programming have enabled researchers to conduct 3D metagenomics experiments. For instance, in February 2017, a team of researchers at Institut Pasteur conducted an experiment using 3D structures of DNA fragments collected from microbiota of mouse intestine to analyze interactions between phage and bacteria.

As of August 2016, approximately 125,000 new viral genomes were discovered with a comprehensive metagenomics analysis of thousands of different samples. Increase in number of viral genes identified, coupled with rising concerns related to viral diseases such as Hepatitis B, Hepatitis C, virus induced diarrhea, influenza, condylomas, and HIV/AIDS, is anticipated to drive the development of novel metagenome study products for clinical use.

A substantial number of kits and reagents are being launched and used to support the rising demand for library preparation workflows from research laboratories. Some key kits are Nextera XT kit, NEXTflex 16S V1-V3 Amplicon-Seq Kit, and NuGEN Ovation library preparation kit. Hence, increase in usage rate and high penetration in the market enabled this segment to dominate the market.

In order to enhance their presence in the market, player are focusing their efforts on offering library preparation kits with improved compatibility and the latest sequencing technologies. Several new software and tools are being introduced to create microbiome datasets for easy access and availability of genomic information at one source. One such tool is ICoVeR, which has been developed as an open source software package to curate disparate genome data.

Growing implementation of function-driven metagenomics for protein screening is expected to drive segment growth. This screening is applicable for antibiotic resistance and vitamins production. Furthermore, function-driven technology allows identification of proteins involved in degradation of pollutants and prediction of degradation rates. For instance, it has been used in understanding the in situ biodegradation mechanism of organophosphorus compounds and to predict its degradation potential.

The sequencing-driven segment accounted for the largest revenue share in the metagenomics market in 2017 owing to higher implementation of this technology. High adoption of this technology can be attributed to advent of novel bioinformatics-related solutions, which simplifies workflows and provides rapid results. It uses bioinformatics tools and computational analysis such as CoMet, MEGAN, METAREP, CAMERA, and IMG/M to deliver rapid results. In addition, efforts to maintain a standard database and rise in number of metagenome sample deposited at data repositories are anticipated to drive the sequence-driven technique segment.

Metagenomics has been widely adopted in environmental applications. Ability to screen uncultured microbes, coupled with growing interest of microbiologists in microbes that inhabit extreme environments, has driven the segment. Environmental applications include use in the agriculture sector to support crop growth, bioremediation through wastewater treatment, clean-up of oil spills and gasoline leaks, and biofuel production by harnessing microbial power. 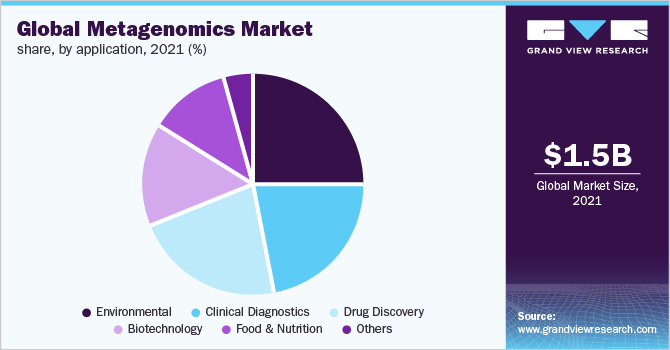 Introduction of advanced sequencing technologies has led to rapid increase in number of studies carried out for establishing a relation between microbes and human diseases. Research programs such as the American Human Microbiome Project and the European project MetaHIT (Metagenomics of Human Intestinal Tract) have aided in metagenome-based exploration of the human intestinal microbiome using reference gene catalogs. This, in turn, is fostering the growth of the human health segment. Increase in investment in similar studies related to human microbiome is also slated to benefit the segment.

North America dominated the market in terms of revenue in 2017. This can be attributed to the presence of a substantial number of prominent biotechnology companies, most of which are focused on development of metagenomics workflows. For instance, in May 2015, CosmosID introduced its GENIUS Metagenomics application available in Illumina’s BaseSpace Apps for use with NGS platforms.

Asia Pacific is expected to witness the fastest growth during the forecast period owing to constant developments undertaken to strengthen the bioinformatics infrastructure and genomic landscape in countries such as India and China. Significant variations in climate and environment across Asian countries is expected to positively influence the adoption of these methods in future.

Companies are engaged in acquisition of emerging players to enhance their market presence and improve their strategic partnerships and collaborations with players in developing markets. For instance, in March 2016, Diversigen-microbiome analysis service provider, entered into a collaboration with South Korea-based bioanalytical CRO-BioCore Co. Ltd. to expand its operations in the APAC region.

This report forecasts revenue growth at global, regional, and country levels and provides an analysis of the latest industry trends in each of the sub-segments from 2014 to 2025. For the purpose of this study, Grand View Research has segmented the global metagenomics market report on the basis of product, technology, application, and region:

How big is the metagenomics market?

What is the metagenomics market growth?

Which segment accounted for the largest metagenomics market share?

b. Kits & reagents segment dominated the metagenomics market with a share of 74.1% in 2019. This is attributed to a substantial number of kits and reagents are being launched and used to support the rising demand for library preparation workflows from research laboratories.

Who are the key players in metagenomics market?

What are the factors driving the metagenomics market?

b. Key factors that are driving the market growth include increasing interest of researchers in metatranscriptomics, metaproteomics, & metabolomics; and rapid advancements in genomic technologies & ancillary protocols.