The global non-destructive testing market size was valued at USD 13.9 billion in 2020 and is expected to expand at a compound annual growth rate (CAGR) of 6.7% from 2021 to 2028. The rise in manufacturing activities amongst the developing and the developed nations is estimated to drive the market over the forecast period. Furthermore, technological innovations have led to the development of advanced non-destructive testing (NDT) processes with improved fault detection and safety. Furthermore, increasing awareness amongst the manufacturers regarding the use of NDT is expected to improve the penetration of NDT techniques in the coming years. 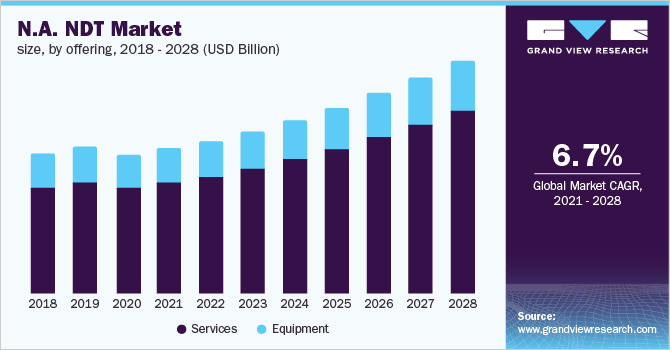 Projects deploying non-destructive testing techniques are completed in a lesser amount of time owing to fault detection at complex locations and irregular surfaces. Reducing possibility of failures is anticipated to fuel the demand for non-destructive testing in the forthcoming years. Besides, the efficiency of fault detection and the ease of operating ultrasonic equipment, as compared to other NDT equipment, are the major reasons leading to the increasing deployment of the ultrasonic test method. Furthermore, advancements in ultrasonic technology over the next eight years are expected to increase the adoption of this test procedure owing to its simplicity.

The market is expected to grow at a considerable rate over the forecast period. This growth is attributed to rising urbanization in developing nations such as India and China which involves undertaking extensive construction and manufacturing projects. The speed of such projects makes it mandatory for the executors to implement testing processes in order to ensure quality in work. This trend is likely to positively impact the growth of non-destructive testing in these nations improving the market’s penetration globally.

Increasing oil and gas projects in Middle East and North America are expected to deploy NDT techniques in order to complete the projects in prescribed timelines and with finesse, thus fueling the demand for NDT equipment over the regions. Besides, the advancements in non-destructive testing technology have led to the development of radiographic testing equipment such as industrial CT scanners, which precisely detect faults in machinery and components. However, the cost of the non-destructive testing equipment and the expertise required to perform the tests increases the complexity and difficulty of deploying the radiographic testing method.

The COVID-19 pandemic outbreak has turned out to be unfavorable and unforeseen for almost all industries globally, including automotive, construction, airlines, manufacturing, among others. As a preventive measure, many governments worldwide implemented lockdowns to contain the novel coronavirus's spread and its subsequent adverse effects. The disrupted global supply chain and decreased industrial productivity thereby strained the global economy. The companies' production and manufacturing capabilities were also disrupted due to the sudden outbreak of the virus.

Furthermore, the pandemic impact on the NDT market stems from the cumulative reaction of relatable industries, which apply non-destructive testing for their operations, to the pandemic. For instance, the defense industry has been affected mildly-when compared to other sectors-due to budgeted government spending, which protects the supply and demand ecosystem. Although some defense companies have been hit hard by the financial shock, the impact is weaker than that on aerospace companies.

The equipment segment is poised to witness steady growth during the forecast period. Advancements in technology leading to the availability of state-of-the-art variants are expected to contribute to the growth of this segment. The availability of advanced variants has expanded the application of the equipment leading to an additional demand. Resurgence in the industrial sector, especially in emerging economies such and India and China, is also anticipated to trigger new installations during the forecast period.

The ultrasonic testing segment dominated the market and accounted for the largest revenue share of 24.7% in 2020. The segment is expected to emerge as the fastest-growing test method segment at a CAGR of over 7.7% over the forecast period. This growth is ascribed to the increasing adoption of ultrasonic detectors in manufacturing processes. Ultrasonic detectors are portable, easy to use, and provide precise results as compared to traditional non-destructive testing techniques. As a result, the adoption of ultrasonic testing is improving at a considerable rate and is expected to improve in the coming years.

The radiographic testing segment is also expected to grow significantly over the forecast period. This growth is attributed to the sophisticated detection of faults using advanced equipment such as industrial CT scanners. The use of radiographic testing provides the most precise results as compared to all other test methods, which helps technicians and operators to focus on particular areas so that minimum faults occur in the final product. However, the cost incurred in deploying the testing equipment is considerably high, which is expected to hinder the growth of the segment to some extent in the forthcoming years. 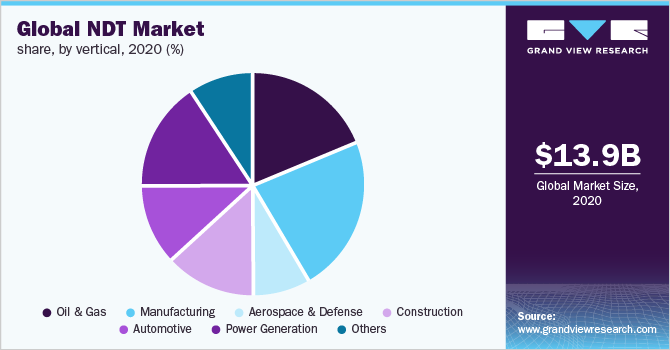 The power generation segment comprises numerous industries such as power grids and hydroelectric power plants. The segment is expected to witness healthy growth over the forecast period with a CAGR of more than 7.0%. Continuous increase in the power demand in developing nations is the major reason for the considerable adoption rate of non-destructive testing techniques in power generation as the use of NDT techniques guarantees faster production rates.

North America emerged as the dominant segment in 2020 with a revenue share exceeding 34.0%. This is attributed to the adoption of NDT techniques across numerous applications, the availability of a skilled workforce, and the number of non-destructive testing training institutes in the region. Furthermore, power generation using shale oil in the U.S. and Canada is expected to positively impact the growth rate in the region. Besides, the growing emphasis on the use of NDT to avoid unexpected failures of systems is expected to drive the regional market.

In Asia Pacific, the market is expected to witness a CAGR of more than 8.0% over the forecast period. This growth is ascribed to an increase in manufacturing, construction, and power generation activities in the region. Although the region faces a scarcity of skilled labor currently, it is expected to reduce, as the awareness and adoption of non-destructive testing techniques increases in the coming years. Furthermore, Middle East, due to the significant presence of the oil and gas industry is expected to be a potential market for NDT techniques.

Incumbents of the market remain keen on increasing their market share. As such, they undertake various initiatives and adopt different strategies, such as signing partnerships, making investments engaging in mergers and acquisitions, launching new products and services, and quoting competitive prices. For instance, in October 2020, Nikon Metrology Inc. announced the launch of APDIS Laser Radar, which is an automated inspection system that offers high-speed measurements. The new product range comprises 4 models, out of which two have a measuring range of 30 and 50 meters. Some of the prominent players in the non-destructive testing (NDT) market include:

This report forecasts revenue growth at global, regional, and country levels and provides an analysis of the latest industry trends in each of the sub-segments from 2016 to 2028. For the purpose of this study, Grand View Research has segmented the global non-destructive testing market report based on offering, test method, vertical, and region:

How big is the non-destructive testing market?

What is the non-destructive testing market growth?

b. The services segment dominated the NDT market and accounted for the largest revenue share of 74.8% in 2020, and is expected to remain dominant over the forecast period.

b. The ultrasonic testing segment led the NDT market and accounted for the largest revenue share of 24.7% in 2020. The segment is expected to emerge as the fastest-growing test method segment at a CAGR of over 7.7% over the forecast period.

Which vertical accounted for the highest share in the global non-destructive testing market?

b. The manufacturing vertical segment dominated the NDT market and accounted for the largest revenue share of 22.4% in 2020. The segment is expected to witness a CAGR of more than 7.8% over the forecast period, primarily due to the ever-increasing volume of manufacturing across the globe.

Which region accounted for the largest non-destructive testing market share?

Who are the key players in the non-destructive testing market?

What are the factors driving the non-destructive testing market?

b. Key factors that are driving the NDT market growth include a rise in manufacturing activities worldwide, increasing awareness among manufacturers regarding the use of non-destructive testing, and advancements in ultrasonic technology.