The global permanent magnets market size was valued at USD 19.14 billion in 2021 and is expected to expand at a compound annual growth rate (CAGR) of 8.4% from 2022 to 2030. The rising prominence of renewable energy sources, such as wind and solar, is anticipated to positively aid the market growth over the forecast period. At present, permanent magnets are used in wind turbine generators for increasing their efficiency. Rare earth magnets, such as Neodymium Ferrite Boron (NdFeB), are being predominantly used in wind turbines owing to benefits, such as increased reliability and reduction in maintenance costs. 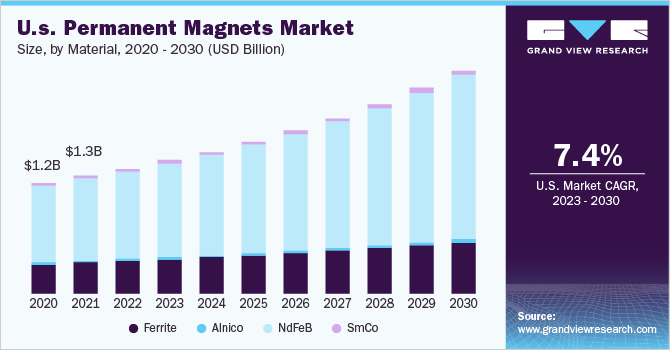 The demand for rare earth magnets in the U.S. is expected to grow at a higher rate than its ferrite counterpart over the forecast period owing to its wide usage in high-end applications like robotics, wearable devices, electric vehicles, and wind power. Since the economic meltdown of 2008-09, the automotive industry in the U.S. has grown steadily. The country has been witnessing a significant rise in the adoption of plug-in electric cars, primarily driven by the advanced products offered by key players, such as Tesla, Chevy, Nissan, Ford, Audi, and BMW, among others. In early 2018, Tesla became one of several electric carmakers to use motors with neodymium magnets.

However, due to fewer permanent motor magnet manufacturers in the country, it imported 4 million pounds of automotive parts from China, with the bulk of them being electric motors. The escalating trade war with China is likely to represent a significant challenge for the U.S., as China threatens to cut off its supply of rare earth and associated products to the U.S. To reduce its reliance on raw material sourcing of rare earth materials, the government has taken various steps including funding mining projects under the Defense Production Act. Such initiatives are likely to strengthen the raw material supply for the domestic industry in the U.S.

The emergence of the COVID-19 pandemic directly impacted the operations of key manufacturing and industrial sectors in the country, thereby resulting in a GDP decline of nearly 3.5% in FY 2020. The recovery was observed during the last quarter of FY 2020 as the manufacturing sector resumed production in a staggered manner. On account of the massive fiscal packages offered by the U.S. government to uphold industrial production, the domestic market for permanent magnets has undergone a steady recovery in 2021.

The ferrite material segment dominated the market in 2021 and accounted for the largest volumetric share of more than 80.6%. Ferrite magnets are primarily used in motor applications. Over 65% of the total volume of ferrite magnets are utilized in motor applications, with consumption in automotive motors, appliance motors, HVAC motors, and industrial & commercial motors estimated roughly at 18%, 14%, 13%, and 12%, respectively, in 2020. Furthermore, they are also utilized in loudspeakers, separation equipment, Magnetic Resonance Imaging (MRI), relays & switches, and holding & lifting applications. Neodymium Iron Boron (NdFeB) is projected to emerge as the second-largest material segment with the fastest CAGR, in terms of volume as well as the revenue over the forecast period.

Over the past five years, the application scope of NdFeB magnets has broadened considerably. Apart from its traditional applications, the product is now witnessing significant penetration in the motors of electric and hybrid electric vehicles, wind power generators, air conditioning compressors & fans, and energy storage systems. Alnico is the name for an alloy composed of aluminum, nickel, and cobalt. Permanent magnets based on alnico were considered to be the strongest magnets before rare earth magnets, such as NdFeB, were discovered in the 1970s. According to Magnet Applications, Inc., the average Energy Density (BHmax) exhibited by the alnico magnet is 7 MGOe, which is higher than that of ferrite magnets but considerably lower than Neodymium-Iron-Boron (NdFeB) magnets. 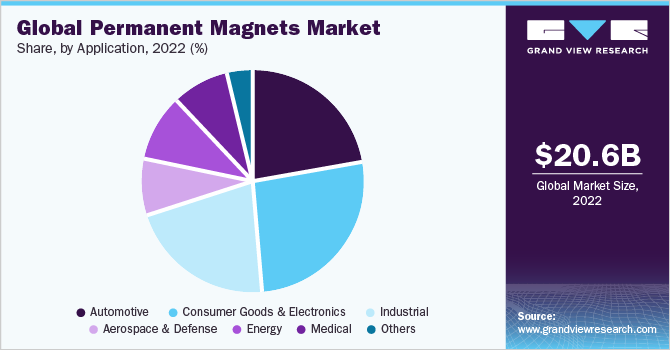 The automotive segment is projected to observe a steady growth rate, in terms of revenue, over the forecast period. According to Arnold Magnetic Technologies, there are roughly 100 permanent magnet devices in a typical car. Although ferrite is favored by the majority of car manufacturers, the shifting paradigm of consumer demand for lightweight vehicles has fueled the need for small and high-performance magnetic products. Thus, advancement toward vehicle energy efficiency is projected to positively support the segment growth over the predicted timeline. The industrial application segment held the third-largest share, in terms of volume, in 2021.

The need among oil & gas industry players to enhance the usage of energy-intensive technological processes like electronic submersible pumps and reduce power consumption represents a lucrative opportunity for the market vendors of the permanent magnet. As compared to asynchronous submersible electric motors, which are used for driving electrical submersible pumps, permanent magnet motors (PMM) have a number of characteristics that make them economically attractive for the oil & gas industry. Medical is projected to be among the fastest-growing application segments for the market over the predicted timeline. The product demand in the medical sector is primarily driven by its increasing use in devices, such as MRI, body scanners, and heart pacemakers.

Asia Pacific accounted for the largest volumetric share of nearly 76.0% in 2021. The region is a manufacturing hub of the world. Automotive and electronic productions are critical components of the region’s manufacturing activities. China, Japan, and South Korea have become hot centers for manufacturing computer hardware devices including hard disks, computer chips, and microprocessors. This has contributed to the rising demand for permanent magnets, which are being extensively consumed by electronics and hardware manufacturers. Europe is anticipated to emerge as the second-largest regional market by 2030, although the region witnessed a sharp decline in 2020. This is because industrial production in Europe has observed slower growth in the past few years due to the overall economic slowdown and due to political uncertainties, such as Brexit.

The economic growth in FY 2020 was further impacted by the lockdown caused by the COVID-19 pandemic. North America accounted for a significant revenue share in 2021. The COVID-19 pandemic drastically affected the market supply in the North America region. According to the International Monetary Fund, the GDP of North America declined by at least 7% in 2020. This indicates the decline in the manufacturing output of end-use industries, such as automotive & transportation, electrical & electronics, and aerospace & defense. Middle East & Africa witnessed a decline of nearly 8.5%, in terms of revenue, in 2020. The GDP of MEA contracted by roughly 4.2% in 2020. The key countries of the region, especially gulf countries, started to feel pressure as the deflation continue to rise.

The global market is fragmented and is characterized by regional concentration. On account of the presence of large-scale rare earth metal deposits in China, numerous small, medium, and large-scale manufacturers are located in close vicinity. The manufacturers are mostly focusing on developing or innovating new products with higher efficiency to cater to high-end performance industries, such as defense, aerospace, and automation. Some of the prominent vendors in the global permanent magnets market include

This report forecasts revenue growth at the global, regional, and country levels and provides an analysis of the latest industry trends in each of the sub-segments from 2017 to 2030. For the purpose of this study, Grand View Research has segmented the global permanent magnets market report on the basis of material, application, and region:

How big is the permanent magnets market?

What is the permanent magnets market growth?

Which segment accounted for the largest permanent magnets market share?

b. Consumer goods & electronics segment dominated the permanent magnets market with a volume share of 27.0% in 2021, owing to its extensive use demand in manufacturing of speakers, headphones, and other electronic accessories.

Who are the key players in permanent magnets market?

What are the factors driving the permanent magnets market?

b. The key factors that are driving the permanent magnets market include rising demand for electronic accessories or gadgets and increasing focus towards wind energy generation.