The global phenylketonuria treatment market size was valued at USD 445.8 million in 2018 and is expected to register a CAGR of 11.0% from 2019 to 2026. The increasing prevalence of PKU across the globe is estimated to accelerate market growth. According to the Genetics Home Reference, 1 in 10,000 to 15,000 cases of PKU occurs in newborns in the U.S. In Europe, some countries have a high incidence rate of PKU, such as 1 in every 4500 babies in Ireland and 1 in 4,000 of individuals in Turkey, are suffering from the target disease.

The presence of pipeline drugs, such as RTX-134, SYNB1618, and CNSA-001, is anticipated to fuel the market growth. CNSA-001 has successfully completed Phase I study and has initiated a Phase II clinical trial while SYNB1618 is currently in Phase 2a clinical trial and has received the FDA fast-track designation. Rising development and commercialization of new drugs are projected to boost the market growth. 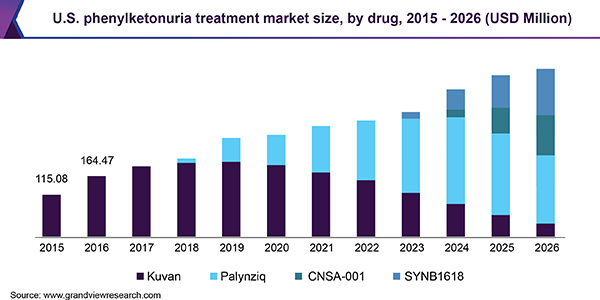 For instance, BioMarin Pharmaceuticals, Inc. launched enzyme therapy drug-Palynziq (pegvaliase), for the treatment of PKU in 2018 in the U.S. Furthermore, the company received the European Medicines Agency (EMA) approval for the Marketing Authorization Application (MAA) for the same drug in 2018 and launched the drug in May 2019. Rising M&A and collaboration activities among the major market participants are also estimated to drive the phenylketonuria treatment market.

For instance, in May 2017, Synlogic, Inc. entered into a merger agreement with Mirna Therapeutics, Inc. The merged company operates under Synlogic name and is engaged in the discovery and development of new drugs for Synthetic Biotic medicines. These medicines are designed using synthetic biology to reprogram microbes genetically to treat inflammatory and metabolic diseases, such as PKU and cancer.

Furthermore, in January 2018, Retrophin, Inc. entered into a joint agreement with Censa Pharmaceuticals to manufacture CNSA-001. Under this agreement, Censa will perform clinical trial programs for CNSA-001 and after drug development, Retrophin will acquire exclusive rights from Censa. In addition, the introduction of new therapies, such as gene therapy, for the treatment of the target disease is expected to drive the market further.

On the basis of drugs, Kuvan and Palynziq are the two approved drugs for the treatment of PKU. Kuvan (sapropterin dihydrochloride) is an oral drug manufactured by BioMarin Pharmaceutical, Inc. The drug was approved in 2007 in the U.S. and 2008 in Europe. The drug patent got expired in 2015 in the U.S. and in 2020 in Europe.

However, BioMarin has entered into a settlement agreement with Par Pharmaceutical for the launch of a generic version of its Kuvan 100mg tablet and powder form. On the other hand, Palynziq (pegvaliase) is the subcutaneous injectable enzyme therapy drug manufactured by BioMarin Pharmaceutical. The drug was approved in 2018 in the U.S. and received the EMA approval for the Marketing Authorization Application (MAA) in May 2019.

North America held the largest market share in 2018. Favorable regulations and rising government initiatives for the treatment of PKU are the key factors driving the market. In addition, continuous research & development and commercialization of novel drugs are expected to further boost the PKU treatment market growth in this region. 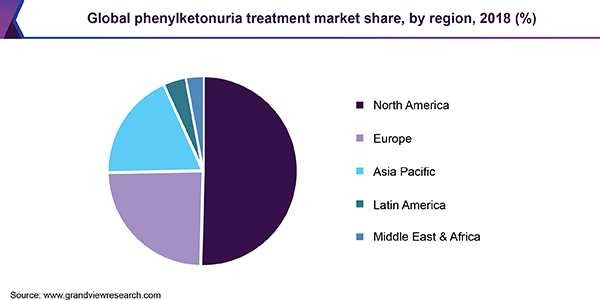 Europe is expected to witness the fastest CAGR over the forecast period owing to the delay in entry of generic version of Kuvan, and introduction of palynziq drug in 2019. Presence of well-established healthcare infrastructure and high healthcare expenditure are also projected to impel the fastest market in the region.

In addition, they also conduct and support programs to provide care and treatment to patients suffering from rare disorders, such as PKU. For instance, in May 2019, Retrophin, Inc. provided initial funds to the Rare Caregiver Respite Program. The program was launched by the National Organization for Rare Disorders (NORD), which aims to provide various services and financial assistance to the patients.

This report forecasts revenue growth at global, regional, and country levels and provides an analysis of the latest industry trends in each of the sub-segments from 2015 to 2026. For the purpose of this study, Grand View Research has segmented the global phenylketonuria treatment market report on the basis of drug and region: