The global plastic films & sheets market size was estimated at 46,343.9 kilotons in 2016. Rising demand for application industries coupled with increasing prominence of eco-friendly and water soluble films is expected to contribute the market growth over the forecast period.

The demand for plastic films & sheets is witnessing massive growth from several packaging and non-packaging application. They are highly versatile and are available in various forms including printed, non-printed, single, multi-layered, and in combination with other materials. They are rapidly gaining popularity across the global market. Favorable cost performance coupled with durability and versatility would remain a key demand driver across several application segments. 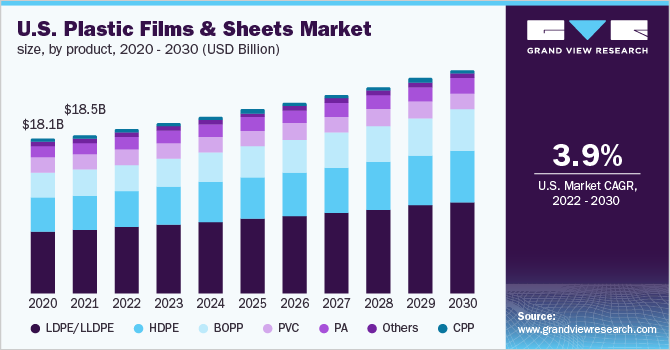 The global plastic films & sheets market is driven by rising demand for the product in different industrial verticals. Key players are engaged in investing in the development of newer technologies coupled with the acquisition of raw material manufacturers. In 2016, Novolex acquired Heritage Bag Company, which is a manufacturer of can liners and several other packaging products made up of plastics. Research and development activities along with the increasing product lines owing to the addition of new products are predicted to have a significant impact on the overall competitive scenario over the forecast period.

LDPE/LLDPE was the largest product segment in 2016. LLDPE is the dominant product type amongst all other variants and is anticipated to continue its dominance over the forecast period. Properties of LLDPE film include flexibility, higher tensile strength as well as higher puncture and impact resistance. Features of LDPE include low barrier and high clarity; it is also among the least expensive among all packaging films which acts as a significant growth contributor to its demand in the global market. Common applications of plastic films & sheets include food packaging, textile packaging, and other special applications in tents and outdoor equipment.

BOPP film is expected to witness the fastest growth rate over the forecast period. Biaxially-oriented implies to the unique property of the film, which allows it to stretch in two distinctive directions. Orientation causes numerous changes in the property of the film such as high stiffness, lower elongation, and lustrousness. BOPP films are used in industries including electrical and electronics, packaging, imaging, graphic and industrial specialty.

Packaging stood as the largest application segment and accounted for over 84.3% of the total revenue share in 2016. 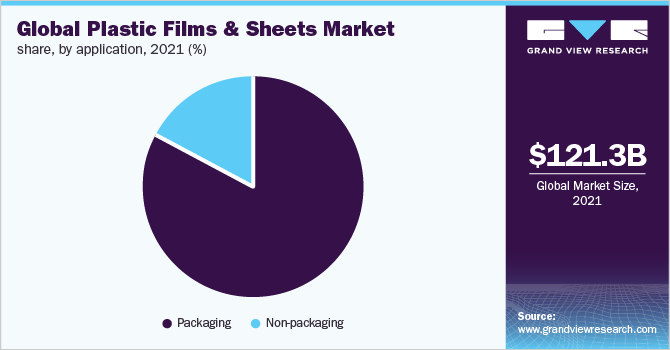 Non-packaging applications would witness the fastest growth rate over the forecast period on account of rapidly growing applications in agricultural and construction applications. Easier availability, lower prices coupled with durability is anticipated to fuel their demand during the analysis period. One of the key growth drivers of the non-packaging applications is the tremendous rise in the medical industry. Owing to advances in science and technology, the medical industry has been growing at a rapid pace over the past few years and this trend is expected to continue over the forecast period especially in emerging counties such as China, India, and Brazil.

Plastic sheets gels are extensively used in agricultural activities to cover the soil in order to save water for irrigation purposes. Application of plastic sheets on farms saves irrigation costs, thereby proving itself as an effective cost saver. It is highly beneficial in water scarce regions as it helps crops to retain water for longer periods. It also has huge growth opportunities across areas witnessing unpredictable rains.

Asia Pacific was the dominant region in 2016 and held 37.5% of the total revenue share. Increasing population and improving standards of living primarily in India, China, Taiwan, and South Korea, have spurred the demand in Asia Pacific region. The increasing purchasing power of consumers, surging demand for consumer & medical goods, and the massive agricultural production propel the plastic films & sheets market in China. Central-South and Central-East China were the major revenue-generating parts of the country. The market in Northwest China is also anticipated to expand in the next few years owing to the Great Western Development Strategy.

Growing economies, rapid urbanization, burgeoning manufacturing ecosphere and increasing infrastructural activities are supporting the growth of the demand in Asia Pacific region. The well-established manufacturing base in China, Taiwan, India, Japan, and South Korea shall provide further impetus for growth.

Central & South America is also projected to witness promising growth in the upcoming years. Brazil, Argentina, Colombia, Peru, and others are the high growth potential markets, which are characterized by booming industrial sector and growing GDP per capita. Increasing automotive production in these countries as mitigation from the U.S. is expected to act as a primary driving force for the region’s economic growth in the future.

This report forecasts revenue growth at the global, regional, and country levels and provides an analysis on the industry trends in each of the sub-segments from 2014 to 2025. For the purpose of this study, Grand View Research has segmented the global plastic films and sheets market on the basis of product, application, and region.