The global polyimide film market size was valued at USD 2.1 billion in 2019 and is estimated to grow at a compound annual growth rate (CAGR) of 7.4% during the forecast period. Development in aerospace technology and growth in the electronics sector is driving demand of this industry. Increasing consumption of consumer electronic products such as mobile phones and flexible displays is also expected to influence the industry positively.

The market is anticipated to grow at a hig8h rate over the forecast period, owing to breakthroughs, innovations, and studies expanding the product application scope. The products are extensively used in automobiles, aircraft's, electrical & electronics, labeling, and most importantly defense devices. 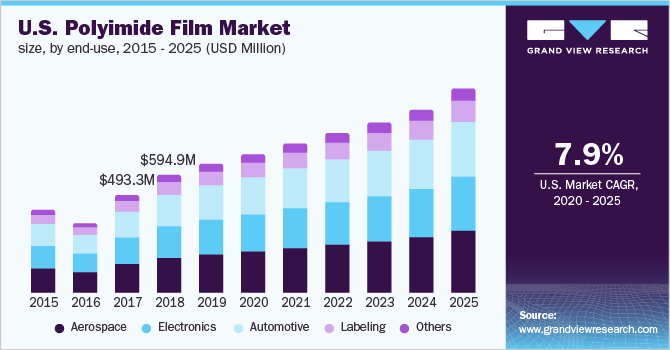 Acquisition and joint ventures are an integral part of this polyimide film market and allow companies to expand their position and hold across the world. The trend in this industry signifies that companies are acquiring possessing technology and patents for producing raw materials from other manufacturers. The product is used to reduce electrical consumption and interconnection between circuits by up to 60%.

Governments and private institutions are extensively financing R&D activities to identify untapped application sectors. These films are used in aircraft and defense electronics due to its lightweight and strong electromechanical properties.

Consumer electronics market is the major end-user industry for polyimide film. Demand for these consumer electronics such as mobiles, modern computers, LED’s, etc. are growing rapidly because of rising technological adaptiveness, disposable income, and awareness about benefits of using these modern electronic products.

Due to advancement in technology and manufacturing capabilities, electronic market is offering more powerful products regarding usage, specification, and durability which are more small and compact than its predecessors. Polyimide film provides excellent mechanical and thermal properties which enable companies to maintain compactness with improved specifications. It is mainly used in transformer wrapping, capacitors, and coil insulation.

The global market for polyimide film is forecasted to be propelled by the snowballing demand for smaller and lighter electronic products along with low power consumption. Because flexible electronic devices are highly shock resistant, cost-effectively mass-produced, and can be easily bent or flexed, they can be integrated into portable devices, smart clothing, and other consumer electronics.

Polyimide films are used in automobile industry for various application such as sensors and coils, wrapping switches, etc. From dashboard to complicated ABS and engines, these films have diversified applications which provide improved specification and features with a reduction in weight and size. The widening of product distribution channels has made these products easily accessible to the consumer.

India is the most significant two-wheeler market worldwide, and it is one of the most lucrative markets for four-wheelers. Huge population base along with rising economy which is improving the consumer’s spending power is attracting major players to establish their manufacturing and distribution base in the country.

According to a recent report by Boeing, a pioneer aircraft manufacturer, the global aircraft manufacturing industry will resume growth with a 0.3% increase from 2017 as compared to the manufacturing slowdown in 2016. The growth is attributed to the strong demand for next-generation aircraft as passenger growing from the developing nations in Central and South America and the Asia Pacific. Boeing predicts that its output is expected to touch 52 units per month by 2018. Thus, it is projected that with the rising production of aircrafts, the demand for polyimide films will also witness a proportional increase.

A flexible printed circuit occupied the maximum share in 2016. Widespread usage of FPC in consumer electronics such as mobile phones, next-generation flexible displays, and an automobile is projected to augment development. FPC is also used in the aerospace sector to provide thermal resistance in high heat application regions. FPC is a critical component in circuit boards and shares a wide variety of applications in various sectors.

Wire & cable emerged as the second-largest segment and expected to grow at a healthy growth rate over the forecasted period. Increased use of wire & cable made in the aerospace and automotive sector is expected to drive demand for wire & cable. It is suitable for applications where high thermal resistivity & high tensile strength, solvent resistance, flammability, and electrical resistivity is required.

The rise in demand for electronics and aerospace is creating a high growth potential for pressure-sensitive tapes. Motor/generator is another major application where it is used for insulation purposes as well as for providing thermal resistance to the product in high heat regions. 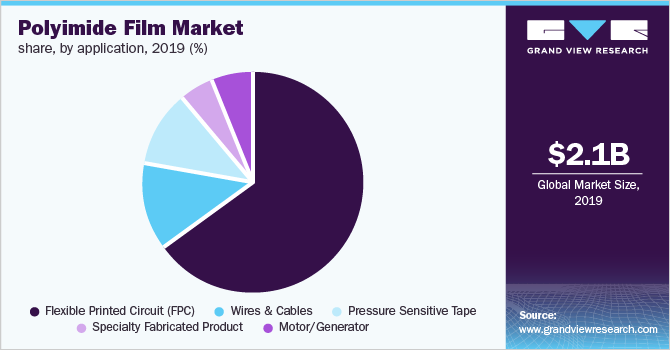 Specialty fabricated products that have applications in speaker coils, space blankets, carrier, and transport belts, gaskets and sensors, and spiral-wrapped tubing is growing because of the growth of its end-use segment. Transport belt, gaskets, and sensors are driving specialty fabricated products because of high demand in construction, manufacturing, and aerospace activities.

Polyimide films are widely used in electronics applications which account for 32.9% of overall demand. The electronics segment is growing at the fastest growth rate owing to the high demand for consumer electronics and an increase in electrical components in the automobile sector. According to data provided by U.N, more people have cell phone access than toilets. Out of the 7.5 billion world’s population, more than 6 billion population uses cell phones, more than 1.68 billion use television. The widening of product distribution channels has made these products readily available to the consumer.

The aerospace segment is anticipated to grow at the second-highest growth rate. Polyimide films are used for various aerospace applications such as wire & cable insulation, sensors, engines, etc. The increase in private investment and government expenditure towards aerospace activities is driving this segment. The product is significantly utilized in defense equipment owing to its characteristics of providing lightweight along with great strength.

Advancements in automobile technology coupled with increasing disposable income and standard of living are projected to drive this sector. The increase in infrastructure development coupled with the huge population in developing nations such as India and China are creating a favorable market for automobiles. Many new product launches have enabled consumers to pick their choice of product from a wide range of options.

Labeling is another major end-user segment that is rising because of demand for products that can sustain in high heat areas. Labeling is a core part of any product, and in the case of flammable and explosive products, it is mandatory to use an appropriate label. Companies are using polyimide films that provide substantial thermal resistance thus save the label from damage due to heat.

The aerospace sector growth attributed to the high demand for next-generation aircraft as passengers growing from the developing nations in the Asia Pacific and Central and South America. Boeing estimates that its production is likely to touch 52 per month by 2018. Hence it is estimated that with the global production of aircraft industry rising, the demand for polyimide films will also see a proportional increase.

The Asia Pacific emerged as the largest and fastest-growing region and had more than 43% of the global revenue share in 2016. Developing economies such as India, South Korea, Indonesia, and China are expected to witness strong economic growth over the coming years. Innovation, rising household incomes, and price deflation especially in developing countries of Asia Pacific have created a high demand for consumer electronic products.

North America is the second-largest market for polyimide films after the Asia Pacific. A high standard of living and well-developed economy & infrastructure are primary drivers for the growth of this industry. Under the Toxic Substances Control Act (TSCA), all polymers are regulated in U.S. Liberal laws for chemicals in comparison to Europe is supporting this industry on the regulatory front. 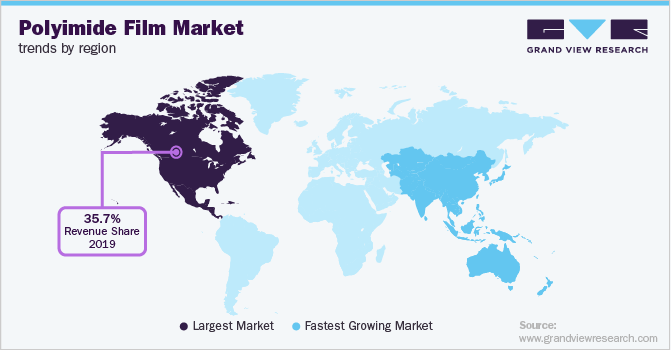 Polyimide films are considered as extreme heat resistant product having excellent strength and insulation properties. In Europe, the major end-use segments for polyimide films are labeling, automotive, and electronics industry. Labelling at high temperatures such as labeling of wires, pressure-sensitive tape, and FPC used in electronics, automotive, and aerospace, requires strong heat resistance to protect the labeled barcode and other information.

High-quality education, high purchasing power, good infrastructure and high standard of living are some of the major advantages to German economy which is achieved through this economic system. Growth in population and consumer’s income is anticipated to drive overall electronic, automotive, and other major industries in Germany. Polyimide films are also projected to witness a higher market share in the coming years owing to the overall economic development which is creating more demand for the innovative and energy-efficient products.

Increasing automotive production and investments in defense & aerospace are projected to enhance demand for such films across the globe. Recent technological development in terms of producing colorless polyimide film due to the rapid evolution of optoelectronic engineering is attracting attention from the academic and engineering section.

Most of the key players have integrated from raw material production to distribution to maintain quality in the raw material. It provides a competitive advantage in the form of cost benefits with an increased profit margin. R&D became the most important factor for companies to survive and perform because of stiff competition, rapid change in technology, and more demanding customers.

Polyimide film shares a diversified ecosystem which consists of upstream manufacturers, end-users, vendors along with stakeholders and government organization. E. I. Du Pont De Nemours and Company, Saint-Gobain, Flexcon company, and Arakawa Chemicals Industries, Ltd are some of the prominent businesses in this sector.

In 2016, Kolon manufactured the world’s first transparent polyimide film which is considered as a suitable substitute for glass used in different displays. Advancement in technology and research in the sector development is expected to replace traditional films with transparent films in flexible displays used by the electric and electronics industry.

This report forecasts revenue growth at global, regional & country levels and provides an analysis of the industry trends in each of the sub-segments from 2014 to 2025. For this study, Grand View Research has segmented the global polyimide film market based on application,end-use, and region: 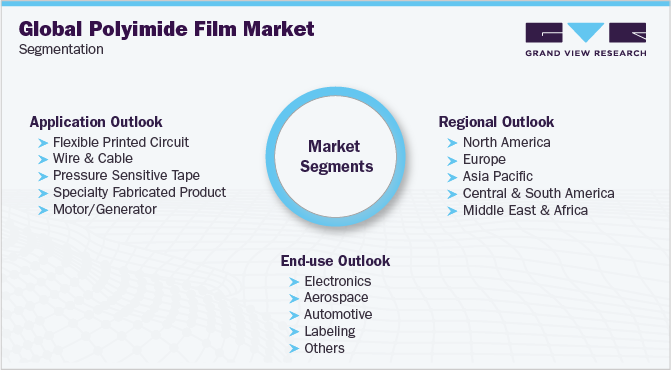