The global rear-view mirror market size was USD 9.64 billion in 2016 and is expected to register a CAGR of 5.7% over the forecast period. Increasing stringency of vehicle safety standards is the prime factor driving market growth. Increasing demand for premium vehicles has further elevated demand for rear-view mirrors. 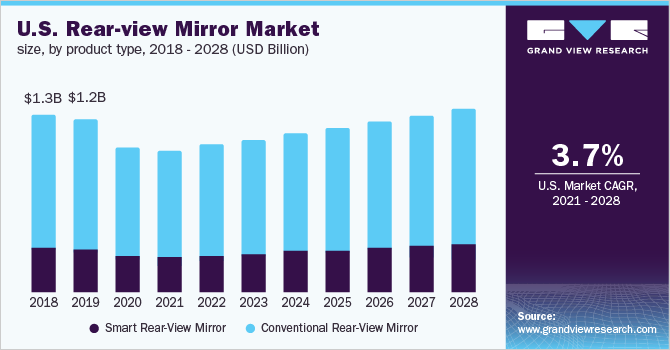 Expected development and commercialization of fully automatic vehicles, such as driverless taxis, are also expected to provide immense scope for growth over the latter half of the next decade. High-powered sensors are anticipated to be used in fully automatic vehicles as they require real-time data processing of information received from a large number of sensors installed in vehicles.

Concerns related to safety of drivers and passengers in cases of accidents are one of the key factors driving the growth of the market. Exterior design and larger headrest in the back seats have led to decreased visibility in traditional rear-view mirrors of certain vehicles. Thus, various manufacturers have implemented smart rear-view mirrors in their vehicles to offer better visibility while retaining intended benefits and functions.

These smart devices have a full-screen monitor for clear visibility and are positioned within existing mirrors, with the potential to switch freely between the two modes, namely mirror and camera mode. Moreover, they help drivers to better understand traffic conditions behind the vehicle. Nissan developed a camera-control and image-processing program that claims to eliminate or greatly reduce glare, caused by trailing cars’ headlights and taillights.

The heating function segment dominated the market in 2016 and is expected to continue its dominance over the forecast period, particularly in regions such as North America and Europe due to its extensive usage in cold weather. The segment is also expected to be propelled by technological advancements and the digitalization of automotive parts.

The blind-spot detection segment is expected to witness significant growth over the forecast period owing to continuous strengthening of vehicle safety standards and growing awareness among people about vehicle safety.

The door-mounted segment dominated the market in 2016 and is expected to continue its lead over the forecast period, reaching USD 11.94 billion by 2025. Door mounted rear-view mirrors are also known as side or wing mirrors and are widely used in luxury vehicles. They can be adjusted by the driver as per convenience and visibility. They feature an aerodynamic design and have lower product replacement costs.

The body-mounted segment is projected to exhibit the highest growth rate by 2025. These kinds are widely used in commercial vehicles where drivers are required to constantly track trailing vehicles. Demand for the same is increasing as heavy commercial vehicles, such as trucks or carriers, do not have interior rear-view mirrors. The segment held a market share of 24.11% in 2016.

Smart rear-view mirrors feature a built-in camera and enable the driver to switch between traditional rear-view mirror and LCD. It helps provide enhanced visibility in unfavorable weather conditions or when the view is blocked by tall cargos and commercial vehicles. Furthermore, they are available in various shapes and sizes and help improve aerodynamics, resulting in enhanced fuel efficiency and drivability.

By type, the market can be bifurcated into interior and exterior. The exterior segment dominated the market in 2016 and is expected to continue its lead over the forecast period. Exterior mirrors are alternatives to side-view ones. They assist in lane changing and parking. Moreover, they help avoid accidents, driving fatigue, and traffic violations.

The interior segment is projected to exhibit the highest growth rate by 2025. It is connected to the auto-dimming feature and has a common sensor. The sensor is located in the interior rear-view mirror. High luxury cars with these variants have an electronically adjustable driver’s seat. Demand for the same is rising due to increasing sales of high-end premium vehicles and passenger vehicles such as SUVs.

Based on vehicle type, the market can be segmented into passenger and commercial vehicles. Passenger vehicles include all personal-use transport vehicles, such as SUVs, luxury vehicles, and sedans, and are commonly designed for seating of five to eight individuals. The segment held the dominant share in the market and is anticipated to expand at a CAGR of 5.6% over the forecast period. 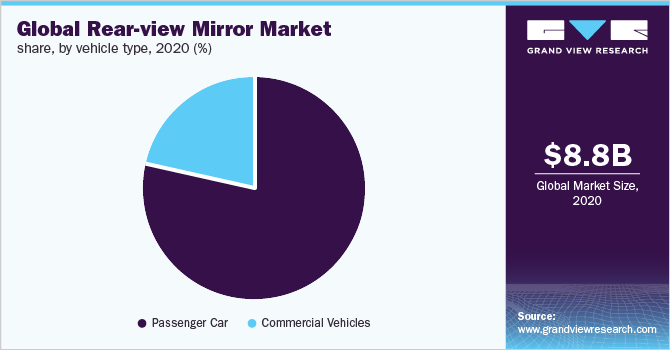 The Asia Pacific market accounted for the largest share by revenue and is expected to reach USD 8.93 billion by 2025. This can be attributed to increasing production of vehicles in India, China, and Japan. It is also the fastest-growing market.

Europe accounted for the second-largest share and the market is expected to experience significant growth owing to presence of prominent luxury car manufacturers such as AUDI, BMW, Porsche, and Volkswagen. The North America market was valued at USD 1.88 billion in 2016 and is expected to register a CAGR of 5.5% over the coming years.

Prominent industry participants include Gentex Corporation; Continental AG; Valeo; Magna International, Inc.; and Murakami Corporation. Key players in the market are focusing on collaborating with other players and making large investments in R&D for developing innovative solutions and gaining a competitive advantage.

Various companies have also been undertaking mergers and acquisitions to stay ahead in the game. For instance, in 2017, BMW unveiled a mirrorless concept in its BMW i8 concept car. The model featured cameras placed on either side of the car, replacing the side mirrors. These cameras are smaller in size and are capable of capturing the view around the sides of the vehicle. A third camera is positioned inside the interior rear-view mirror and it captures the view behind the car.

This report forecasts revenue growth at global, regional, and country levels and analyzes the latest industry trends in each of the sub-segments from 2016 to 2025. For this study, Grand View Research has segmented the global rear-view mirror market report based on feature type, mounting location, product type, type, vehicle type, and region: