The global satellite data services market size was valued at USD 5.3 billion in 2019, registering a CAGR exceeding 27% from 2020 to 2027. The high functionality of satellite imagery data across various industries and rising need for free availability of satellite-based images is expected to drive the market growth. Rising demand to access real-time satellite imagery feed on mobile devices, due to the popularity of tools such as Google Earth, is further promoting the market growth. 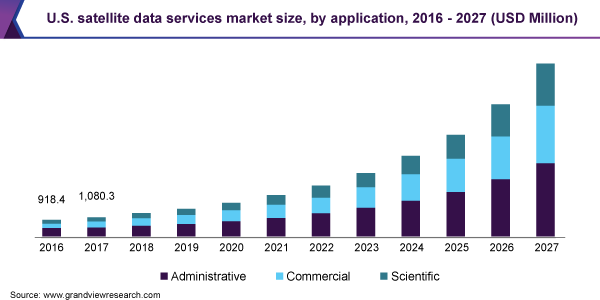 Increased adoption of artificial intelligence (AI) and machine learning (ML) in the space sector has created numerous opportunities for service providers to offer AI and ML integrated solutions. The AI-based platforms are offering insights on previously inaccessible factors such as social, industrial, and economic processes. ML algorithms are increasingly used to process daily satellite imagery to classify and detect objects, locate geographic and topographic features, and to monitor minute changes over a span of time. Defense contractors, such as Lockheed Martin Corporation has developed a satellite imagery recognition system, the Global Automated Target Recognition (GATR). This system leverages open-source deep learning libraries to classify and identify big datasets in a faster and more efficient method.

The administrative segment dominated the satellite data services market in terms of revenue share in 2019. Government and non-government agencies are the forerunners in adopting satellite-based imagery and insights for various administrative purposes such as cadastral surveying, land management, and infrastructure monitoring. The integration of big data analytics with satellite imagery enables organizations to smartly map urban development, the flow of resources, and forestry and agriculture, and take necessary administrative measures. The need to generate precise 3D geographic information system (GIS) maps to effectively assist planners in devising efficient construction, defense operations, and mitigate the risk of disasters is propelling the demand to adopt satellite data services.

The commercial segment captured a revenue share of over 32% in 2019 owing to the rising use of data services in maritime navigation, designing pipeline systems, and broadcasting applications. Multiple agriculture and farming companies have started referring to commercially available satellite imagery data to monitor the right vegetation post-harvesting and improve soil conditions. Detection of mutations such as cracks in dams and dikes, ground movement in the vicinity of pipelines, growth of trees in electrical lines, and monitoring refugee movements and activities at high altitudes are some of the use cases which offer promising growth prospects in commercial applications.

The environmental segment captured the largest revenue share in 2019. The need for high-resolution earth images to accurately map wildlife populations, track illegal mining, and detect deforestation trends has provided significant growth prospects in the environmental sector. Furthermore, increased use of satellite imagery among meteorologists to closely monitor current climate changes and take necessary corrective measures has provided an impetus to the market growth. Federal agencies have started developing missions to use satellite-based LiDAR for mapping structure and height of forest covers and map carbon storage and biomass above ground. For instance, NASA has developed the Global Ecosystem Dynamics Investigation (GEDI) that facilitates geographical mapping of the above use cases via the International Space Station (ISS), thus eliminating the need to hire airplanes for aerial monitoring. 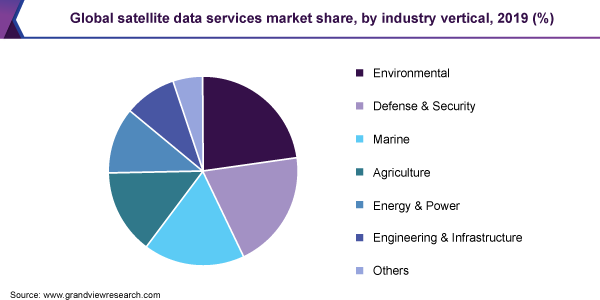 The defense and security segment contributed significantly to the revenue share in 2019. Advancements in satellite technology have enabled local governments and defense agencies to better understand and access movement of people & equipment, evaluate damage from natural disasters and attacks, and identify camouflaged bunkers. Furthermore, companies have started providing satellite imagery as a service and offer all elements regarding Tasking, Processing, Exploitation, and Dissemination (TPED) to facilitate efficient and data-driven decision making. For instance, Earth-i Ltd., a geospatial intelligence company, offers attractive services to defense firms by combining data analytics with regularly captured pictures of the Earth’s surface to its clients.

North America dominated the market for satellite data services by capturing more than 33% revenue share in 2019. The formulation of the new National Space Strategy enables the government to partner with companies in the commercial sector such that they can establish a prominent defense system against threats from space-bound attacks. Additionally, U.S. distributes images captured by the Landsat satellite freely, thus promising productivity saving and economic benefits for users. Such initiatives have resulted in the emergence of several small satellite manufacturers, such as Pumpkin Space Systems Inc. and AAC Clyde Space, which offer continuous feed about the earth’s surface.

Europe captured significant market share in 2019 and is expected to exhibit a steady growth rate over the forecast period. The European Union has collaborated with other international institutions to introduce several acts and initiatives such as the Common Agriculture Policy (CAP), the UN Convention for Combating Desertification and Land Degradation, the EU Raw Materials Initiative, and the Soil Framework Directive. These institutions leverage data provided by the Copernicus Hyperspectral Imaging Mission for the Environment (CHIME) mission for customers. Moreover, economies including The Netherlands have devised their own imagery portal, the National Satellite Data Portal, managed by the Netherlands Space Office (NSO) to strategically manage the demand and supply side of its satellite-based imagery.

Additionally, the region has also launched the Retro Propulsion Assisted Landing Technologies (RETALT) project, which is developing a reliable, reusable, and cheaper technology, which is lowering down space accessing cost. A large amount of satellite data produced by the Copernicus Programme in Europe and its free public availability offers significant opportunities to develop new products and applications.

Airbus S.A.S; DigitalGlobe; Harris Geospatial Solutions, Inc.; Planet Labs, Inc.; Ursa Space Systems; and ICEYE are some of the major market players. Organizations worldwide have started partnering with government and non-government agencies to develop satellites that offer ultra-high-resolution SAR imagery, which facilitates better decision making. New entrants such as Planet Labs, Inc. and UrtheCast are disrupting the market by offering satellite imagery data, which is frequently captured at a global scale and provides images at increasingly relevant resolutions. Furthermore, space companies have developed applications to offer users images and insights on the earth’s surface, captured on a daily basis, by leveraging highly advanced satellites by companies such as Airbus S.A.S., which are equipped with state-of-the-art cameras and sensors.

Mergers and acquisitions in the industry have enabled companies to diversify and enhance their service offerings. For instance, the recent merger between DigitalGlobe and MacDonald, Dettwiler and Associates Ltd., in February 2017, resulted in the formation of Maxar Technologies Ltd. to offer a broader range of services to its customers. Companies are also teaming up with one another to enhance service offerings and meet the demands of users. For instance, Ursa Space Systems extended its collaboration with SI Imaging Services Co., Ltd for the former to provide new insights, analytics, and intelligence for a wide range of industries.

This report forecasts revenue growths at global, regional, and country levels and provides an analysis of the latest industry trends in each of the sub-segments from 2016 to 2027. For the purpose of this study, Grand View Research has segmented the global satellite data services market report based on application, industry vertical, and region: