The global sintered steel market size to be valued at USD 177.9 million by 2027 and is expected to grow at a compound annual growth rate (CAGR) of 5.0% during the forecast period. The growing emphasis towards production of metal parts at low cost with reduced wastage and increased accuracy is anticipated to drive the market growth, especially in the automotive industry. Steel is a preferred alloy in industrial applications for producing parts that exhibit characteristics such as high strength and corrosion resistance. Sintering offers added advantages in comparison to other processes such as casting, stamping, and cutting. Along with the freedom of complex design, production of sintered steel parts reduces machining cost and wastage significantly, which are anticipated to augment market growth. 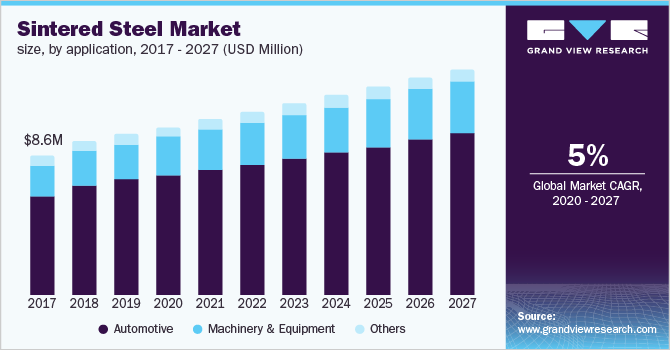 The automotive industry is a major end user of sintered steel on account of rising emphasis towards stringent regulations and concerns pertaining to high cost of manufacturing, increasing wastage in the manufacturing process, and carbon footprints. Norms such as Bharat Stage VI (BS-VI) are expected to bring lucrative opportunities for sintered components across the forecast period.

The BS-VI norm focuses on reducing harmful emissions that requires the manufacturers to add sensors before and after the catalytic converters, for which sintering is an ideal process for the mass production of such components considering the productivity advantages. The sintering process involves less number of manufacturing steps than conventional processes, which results in reduced energy usage and low carbon footprint, moreover, sintered steel net parts are lightweight and provide better yield at low cost. Such advantages along with the rising growth in the global auto component industry are expected to propel the demand for sintered steel in coming few years.

Despite the increasing product demand, the market growth is expected to be affected with certain disadvantages involved with sintering technology, such as difficulty in producing large parts and lack of high-strength in sintered components when compared to cast irons or forged parts. In addition, machinery and equipment required for manufacturing are very expensive that constrain the mass production. Apart from the restraining factors of the technology, the raw material steel too can be substituted in the future on account of rapid technological developments by elements like aluminum.

The tremendous expansion in the building and transportation business, as well as the electrical and microelectronics practice across provinces, is driving market entry. Factors such as increasing technological advancement in the automotive industry and upcoming construction and architectural projects will drive the demand for sintered steel.

Sintered steel is broadly used in various industries, including industrial machinery, electronic and electrical parts, medical device manufacturing, etc. The main implementation of sintered steel has been revealed to be in the automotive industry, within which technological advances will significantly raise product sales and drive the market’s growth.

Despite growing market growth, the market is expected to be hampered by sintering technology's disadvantages, such as the complexity of generating large parts and the lack of high-strength sintered elements when contrasted to carbon steels or crafted pieces. Furthermore, the equipment and machinery required to manufacture are costly, restricting mass production.

With the rising focus on stringent regulations and concerns regarding high manufacturing costs, increasing wastage in the manufacturing process, and ecological footprint, the engineering, and manufacturing industry is a significant end-user of sintered steel. Norms such as Bharat Stage VI are anticipated to build profitable opportunities for sintered components over the forecast period.

The material utilization in sintering process is around 95% when compared to wrought process, which is around 55%. This characteristic increases the demand for sintered parts in capital goods industry, making automotive the key end-use segment, followed by electrical appliances and tools manufacturing. In general, a car has 7 to 20 kilograms of sintered parts, where the figure varies from country to country. So if an average part weighs around 20 grams, the number of sintered components in a car will be around 600 to 700.

Automotive industry primarily prefers five materials in manufacturing, namely, steel, plastic, rubber, aluminum, and glass, where steel accounts for the major share on account of its low cost, less weight, easy availability, and flexibility in characteristics required by the industry. The above statistics indicate that sintered steel is majorly applicable in car manufacturing. Few examples of sintered steel parts in the automotive industry include hardened gear and pinion, hardened synchronizer hub, camshaft gear, planetary assembly, synchronizing assembly, and planetary carrier. With the augment in the production of vehicles, the demand for sintered steel parts is anticipated to amplify over the forecast period.

Machinery and tools are expected to be the fastest-growing segment with a CAGR of 5.2%, in terms of revenue, during the forecast period. The growth is attributed to the increasing production of electrical appliances, machinery equipment, and tools across the globe on account of the growth in the manufacturing sector. There are various equipment and tools that are manufactured using steel by sintering process, such as cutting tools, cold work tools, and saws and knives. The global production value of machine tools registered a CAGR of 3.3% from 2015 to 2018 and this growth is expected to flourish further considering the ongoing investments in the industry.

For instance, in 2019, OSG Corporation announced about designating a sum of approximately USD 4 million for its manufacturing operation in South Africa, the Somta Tools factory. The investment is for new technology and equipment in the factory that aims at making Somta Tools factory a machining solutions leader in Africa. The increase in production of tools and equipment is expected to positively influence the demand for sintered steel over the forecast period.

In 2019, North America accounted for over 25% of the global market, in terms of volume. The growth in the automotive industry is anticipated to emerge as a key driving factor for the market to flourish in North America. The new USMCA agreement, which clearly states that automobiles must have 75% of their components to be manufactured in either of U.S., Canada, or Mexico for it to be qualified for no tariffs is propelling manufacturers to set up plants in North America for gaining the leverage of zero tariffs, larger customer base, and advanced technology. 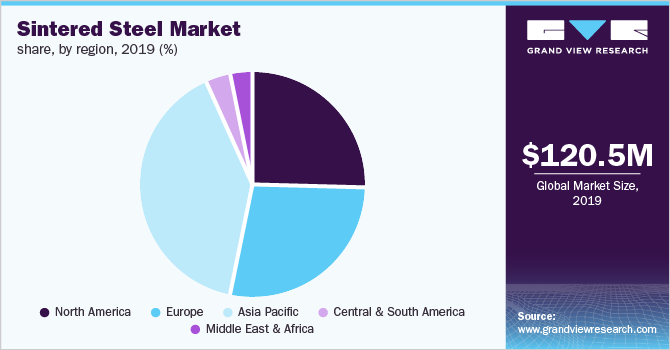 For instance, in March 2019, the Toyota Motor Corp. increased its planned investment to around USD 13 billion by 2021 for producing more models and parts in U.S. considering the tariffs on automotive imports. The company plans at creating over 600 jobs in the country and increase its engine production at the Alabama plant.

Asia Pacific was the largest market in 2019, accounting for a revenue share of around 50% and the trend is anticipated to continue over the forecast period. The share is attributable to the growing manufacturing sector in the developing economies. The region leads in terms of automotive components production, which is a key shareholder amongst the applications of sintered steel. In 2018, the region accounted for a share of nearly 30% of the global automotive exports wherein, Japan, China, South Korea, Thailand, and India were amongst the top 20 exporters of automotive parts in the world. 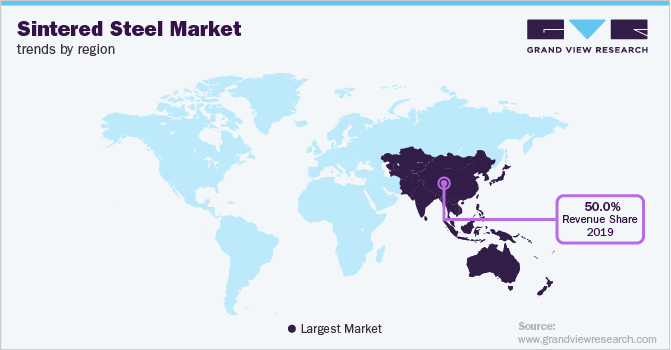 Although the region is expected to remain the largest market for sintered steel, it is expected to establish a sluggish growth for short term on account of the outbreak of coronavirus (Covid-19) epidemic in China. China plays a key role in import-export of various components in the region and outside, thus, a decline in the country’s GDP is expected to impact the entire global GDP. Numerous industries including the automotive and electrical appliances are affected over the shutting down of plants and diminishing stocks in China, which might lead to a shortage in supply resulting in high prices.

The demand persists with the growth in the manufacturing sector that has compelled the manufacturers to augment their production capacities. For instance, in February 2019, Kobe Steel announced its plans to invest around USD 162.3 million in expanding its production capacity of steel powder plant in Takasago, Hyogo Prefecture by 14 kilotons, reaching 110 kilotons per annum. The steel powder of the company is used for producing automotive sintered parts including engine and transmission parts. The expansion is expected to complete by 2021.

The market has various large and small players some of which are horizontally integrated across the value chain. For instance, Erasteel, a leading producer is engaged in the manufacturing of both metal powder and sintered parts. The key players are striving to gain a competitive edge over other vendors in the value chain by adopting strategies such as mergers and acquisitions and capacity expansions. For instance, in February 2019, GKN Sinter Metals inaugurated its new facility in Mexico that is spread across 6,000 square meters. In July 2019, Magnitogorsk Iron and Steel Works started its new sinter plant that has an annual capacity of up to 5.5 million tons.

Some of the prominent players in the sintered steel market include:

This report forecasts revenue and volume growth at global, regional, and country levels and provides an analysis of the latest industry trends in each of the sub-segments from 2016 to 2027. For the purpose of this study, Grand View Research has segmented the global sintered steel market report on the basis of application and region. 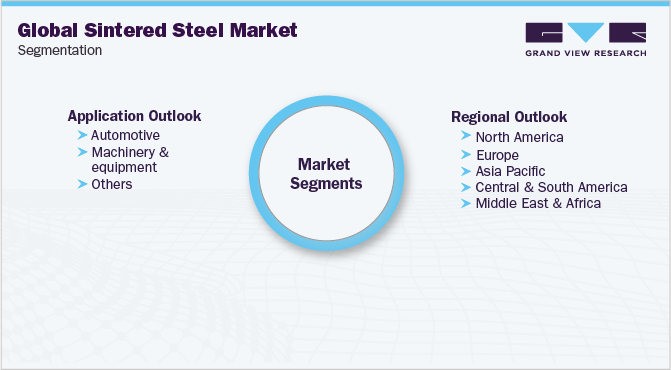 How big is the sintered steel market?

What is the sintered steel market growth?

Which segment accounted for the largest sintered steel market share?

b. Asia Pacific dominated the sintered steel market with a share of 50% in 2019. This is attributable to growing manufacturing sector in the developing economies such as automotive components production, which is key shareholder amongst the applications of sintered steel.

Who are the key players in sintered steel market?

What are the factors driving the sintered steel market?

b. Key factors that are driving the market growth include growing emphasis towards production of metal parts at low cost with reduced wastage and increased accuracy in the automotive industry.