Software Defined Radio Market Size, Share & Trends Analysis Report By Type, By Component, By Frequency Band, By Platform, By End Use, By Region, And Segment Forecasts, 2020 - 2027

The global software-defined radio market size was estimated at USD 20.4 billion in 2019 and is anticipated to witness a CAGR of 8.7% over the forecast period. An increase in defense expenditure to improve defense communication systems is a major factor driving the demand for software-defined radio systems. In addition, the market for global software defined radio (SDR) has witnessed considerable growth owing to the increasing need for communication devices to be more flexible and software configurable. Moreover, SDR is widely adopted in space communication as improves the performance of the satellite and can operate across several frequency bands in a precise manner.

SDR enables users to receive signals from multiple mobile standards such as WiMAX and GSM. To fulfill the growing demand for higher data speed that require additional hardware expenses on the core network, mobile operators are adopting SDRs.Software-defined radio systems help improve connectivity solutions by eliminating hardware constraints. Moreover, SDR and Network Function Virtualization (NFV) are expected to play a major role in the integration of different communication technologies. The 5G radio access is based on SDR/NFV infrastructure, which is another factor driving the market for software-defined radio systems. 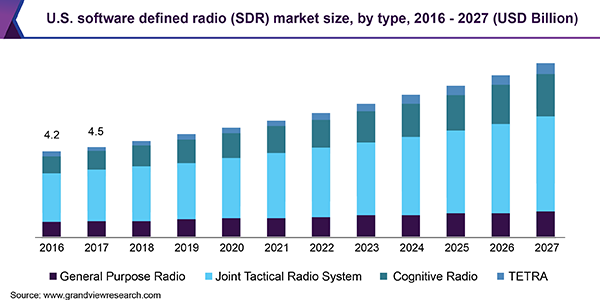 The increasing penetration of IoT and wireless devices positively impacts the market for software-defined radio. In 2017, there were around 30 commercial deployments of NB-IoT and LTE-M in 20 countries, including the U.S., China, and Europe. The GSM Association estimates that by 2025, the number of IoT-connected devices would reach 3.1 billion globally, amounting to 12.0% of the total IoT connections globally. In addition, the growing popularity of wireless sensor networks is anticipated to drive the demand for SDRs.

An increase in spectrum range for wireless communications is a major trend observed in recent years. The inception of the 3rd Generation Partnership Project (3GPP) under the telecommunications organizational partnership calls for rapid deployment of LTE and LTE-Advanced commercial wireless technology, subsequently driving the demand for SDRs. While LTE technology is currently used between 450 MHz to 3.8 GHz, it is expected to cross 5 GHz in the near future. Moreover, software-defined radio is used in applications such as radio frequency spectrum analyzers and global positioning systems.

Advancements in cellular infrastructure technology have undergone developments such as changes in RF amplifier technology. For instance, smartphone designs have the potential for the implementation of technologies such as surface acoustic wave (SAW) and bulk acoustic wave (BAW). The pricing factor for these has also been relatively narrowed due to low power filter requirements and confined fractional bandwidth. A disadvantage of using software-defined radio technology is the development of a software-defined radio with hardware and software platform, which is expensive. The conversion of analog to digital may also limit the top frequencies present in the digital section.

Based on type, the JTRS segment dominated the market for software-defined radio in 2019. The technology is widely adopted in the defense sector since it comprises multi-mode/multi-band pre-emptive radio sets that enable simultaneous voice and data communication capacities to the warfighter. Based on Software Communications Architecture 4.0 (SCA), an open systems architecture forms an essential component of JTRS. The U.S. Department of Defense’s Joint Tactical Radio System (JTSR) program also drives the growth of the JTRS segment.

Based on components, the hardware segment dominated the market for software-defined radio in 2019 owing to the rising popularity of portable SDRs. The hardware segment is driven by the combination of analog and digital technology on a single chip, which is a major factor contributing to the reduction in weight and size. In addition, the growing popularity of field-programmable gate array (FPGA) with integrated analog-to-digital converters (ADCs) and digital-to-analog converters (DACs) drives the segment growth.

The software component segment is expected to witness significant growth owing to increasing use in commercial applications. The software in SDR is used to define its specifications and functions. The software provides better flexibility for network load balancing and eliminating capacity bottlenecks for packet-switched core backhaul. Algorithms within SDR are downloadable and adaptable for the entire lifespan of the software-defined radio. This enables the software-defined radio to maintain flexibility and is ideal for commercial and defense applications. Its implementation in applications such as global positioning systems, text messaging, remote radio monitoring, accessing voice, and data information is a major factor driving the software segment.

Ultra High Frequency (UHF) bands are used for commercial applications such as cellular systems and 5G networks. Owing to the need for wide area coverage, UHF SDRs are used to provide uninterrupted services to customers. Moreover, factors such as the increasing number of smartphones and frequent use of the internet for IoT applications are driving the segment growth. The segment is expected to hold the largest market share by 2027.

Airborne SDR is a high-rate data communication system, which is widely used for military and civil applications. Various companies such as Collins Aerospace and L3 Harris Technologies are integrating SDR technology solutions with existing airborne applications, making them cost-effective, secure, and mission critical. Moreover, SDRs incorporate a wideband networked waveform, which is suitable for secure airborne communications. The ability to provide mobile network connectivity across battlespace/warships with an accurate signal is expected to drive the airborne software-defined radio segment over the forecast period.

Based on end use, the SDR market has been segmented into aerospace and defense, telecommunication, public safety, commercial, and others. SDR is widely used in the defense sector owing to its greater functional scope. The device offers high adaptability, interoperability, precision, clarity, and high speed. Falcon, a leading player, enables a wider deployment of SDR devices backed with SCA 4.0 for the defense sector. In recent years, countries are focusing on increasing expenditure on defense, which further drives the segment growth. 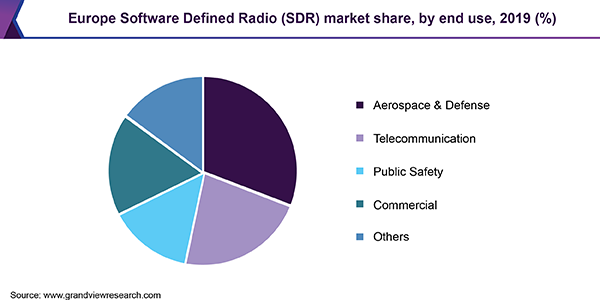 The commercial segment is estimated to register the highest growth rate over the forecast period owing to the rising adoption of SDR across industries such as automotive and transportation. Another driver is the growing demand for car radios that support traditional analog systems and digital systems. SDR makes car radios compatible with different digital radio broadcast standards such as Digital Radio Mondiale (DRM), Digital Audio Broadcasting (DAB), and HD Radio in India, the U.K., and the U.S., respectively.

The Asia Pacific market for software-defined radio systems is projected to witness the highest growth over the forecast period owing to the rise in terrorism in Asian countries such as Bangladesh, Pakistan, and Afghanistan. In response, intelligence and military organizations in the region are increasingly deploying SDR to enhance communication systems enabling secure collaboration, improved information sharing, and shared situational analysis. For instance, in December 2018, the People’s Liberation Army of China awarded a contract to Elbit Systems Ltd. for providing CNR-710 MB airborne radios. Furthermore, the need for enhanced communication by law enforcement during times of natural calamities drives the demand for software-defined radio systems. Moreover, government funding for R&D for SDR in countries such as China and Australia is expected to drive the demand for software-defined radio systems in the Asia Pacific.

In April 2019, L3 Technologies, Inc. merged with Harris Corporation to create L3 Harris Technologies, Inc., a global defense technology company for emphasizes on developing mission-critical solutions. Moreover, in April 2019, BAE Systems launched its SDR assembly for space applications that cater to the requirement of the U.S. Department of Defense.

This report forecasts revenue growth at global, regional, and country levels and provides an analysis of the latest industry trends in each of the sub-segments from 2020 to 2027. For the purpose of this study, Grand View Research has segmented the global software defined radio market report on the basis of type, component, frequency band, platform, end use, and region:

How big is the software defined radio market?

What is the software defined radio market growth?

b. North America dominated the SDR market with a share of 33.6% in 2019. This is attributable to the Joint Tactical Networking Center (JTNC) program, which provides technical support for wireless communication systems to the U.S. Department of Defense.

Who are the key companies/players in software defined radio market?

What are the factors driving the software defined radio market growth?

b. Key factors driving the SDR market growth include an increase in defense expenditure to improve defense communication systems is a major factor driving the demand for software-defined radio systems.