The global solvent-based plastic recycling market size was valued at USD 599.75 million in 2021 and is expected to expand at a compound annual growth rate (CAGR) of 5.9% from 2022 to 2030. The consumption of plastics is growing and with plastic consumption, there is growing plastic waste which because of improper plastic waste management has become a global concern. Solvent-based recycling of plastic waste is one of the innovative ways to solve this crisis. To remove impurities a selective solvent dissolution process is used to recover plastics of minimum standards suitable for reuse. The pure polymer can be extracted from the solution through precipitation. 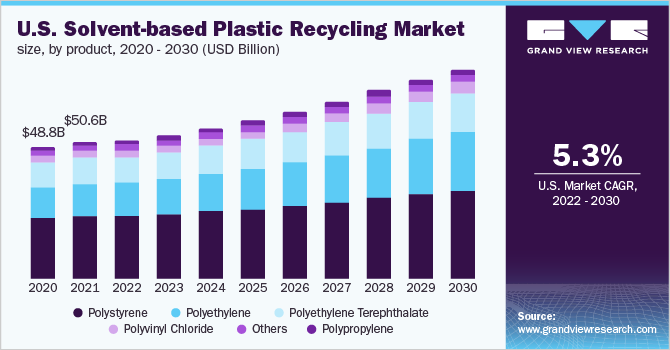 Solvent-based recycling is an innovative solution to solve the growing plastic waste crisis. Scientists from the University of Wisconsin-Madison (UW-Madison) have discovered a new process named Solvent-Targeted Recovery and Precipitation (STRAP) processing for extracting the plastics in multilayer plastics using solvents. In this process, plastics are separated in a commercial multilayer plastic consisting of polyethylene, polyethylene terephthalate, and ethylene vinyl alcohol with the help of a sequence of solvent washes.

Polystyrene (PS) was the largest product segment accounting for a revenue share of over 47.3% in 2021. Polystyrene (PS) is one of the most important plastics and is widely used in daily life in electronics, building materials, packaging, and food containers. More than fifteen million tons of PS are produced per year globally but only a small fraction of this is recycled. The rate of recycling is so low since not all recyclable plastics are collected and taken to recycling facilities. Also, existing recycling technologies can only recycle certain types of PS.

Polystyrene (PS) can be recycled by mechanical, solvent-based, and chemical technologies. In mechanical recycling, plastics are sorted according to the type of plastic. After sorting they are remelted and mixed with virgin materials to make new products. In solvent-based processes, the PS is dissolved in a solvent for separation and then recovered from the solvent. This allows a better purification of PS waste materials as compared to a mechanical process.

Polyethylene Terephthalate (PET) plastic is the most recycled plastic globally. Solvent-based PET recycling has certain advantages over mechanical recycling. For example, Worn Again, a UK-based company has developed technology to recycle PET packaging which includes bottles based on solvent-based recycling. The major advantage of this method of mechanical recycling is the removal of dyes which affect the quality of recycled material. Dyed textiles and colored plastics are less valuable as secondary feedstock for products compared to uncolored transparent materials. To be economically viable, the solvent has to be recycled.

Packaging held the largest revenue share of over 38.6% in 2021. Most of the plastic packaging materials manufactured today are composites made of distinct polymer layers i.e., multilayer films. Annually billions of tons of multilayer films are produced and because of inefficiencies in manufacturing result in huge post-industrial waste streams. There are no commercially practiced technologies to fully deconstruct postindustrial multilayer plastic wastes into virgin, recyclable polymers. 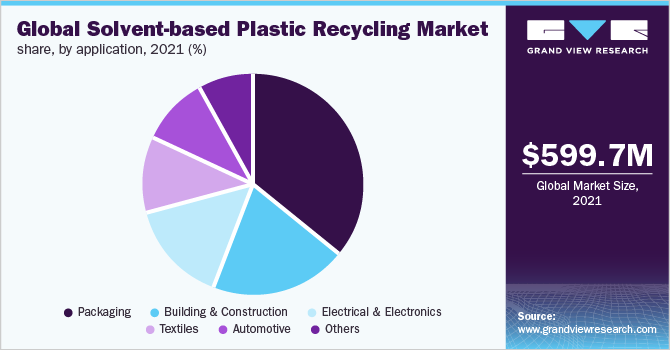 Electronic waste containing computer equipment and consumer electronic components is one of the fastest-growing waste streams globally. Although E-waste constitutes only two percent of U.S. total municipal waste, it contains significant amounts of toxicants including flame retardants and heavy metals. These pose a significant threat to both environment and human health given the current methods of disposal of plastic waste. Large amounts of E-waste are put into landfills or either incinerated. Heavy metals found within E-waste including cadmium, lead, and mercury pollutes water sources which in turn pollute the food chain when leached out from landfills.

Europe held the largest revenue share of 63.95% of the global solvent-based plastic recycling market in 2021. The regional growth can be attributed to the growing awareness among consumers and increasing pressure from regulators regarding plastic pollution. European Union has set a target of recycling fifty percent of plastic packaging by 2025 and 55% by 2030.

Governments and major companies are continuously refining targets to reduce plastic waste and promote a circular economy in the plastics value chain because of which solvent-based recycling has seen a surge of interest, Solvent based recycling is also useful to recycle the low-quality plastic waste which cannot be mechanically recycled. 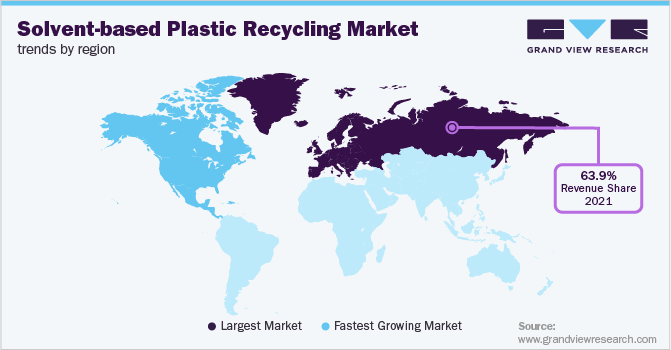 For example, APK AG can recycle several polymers from multilayer packagings such as low-density polyethylene (LDPE) and polyamide (PA) of virgin quality, which can be used in technical injection molding, flexible packaging, labels, and laminates, from PE/PA multilayer plastic waste through their signature Newcycling technology.

Major chemical companies have developed several processes based on solvent-based recycling of plastic waste. Some of them include Proctor & Gamble’s PureCycleTM Process, APK AG’s Newcycling Process, and Fraunhofer’s CreaSolv Process. Companies are resorting to collaborations and establishing new recycling plants to capture the market. For example, In August 2021, PureCycle Technologies signed an agreement with SK Global Chemical to set up a polypropylene (PP) recycling plant in South Korea. Some prominent companies in the global solvent-based plastic recycling market include:

This report forecasts revenue growth at global, regional, and country levels and provides an analysis of the latest industry trends in each of the sub-segments from 2019 to 2030. For this study, Grand View Research has segmented the global solvent-based plastic recycling market report based on product, application, and region: 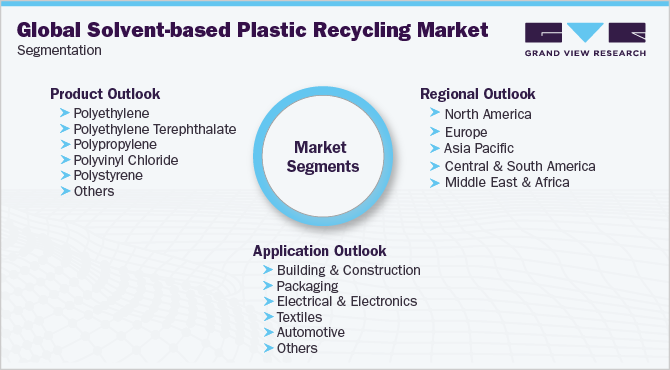 How big is the solvent-based plastic recycling market?

What is the solvent-based plastic recycling market growth?

b. The polystyrene product segment led the market with a share of more than 47.7% in 2021 and is expected to maintain a healthy growth rate over the forecast period.

Who are the key players in the solvent-based plastic recycling market?

b. Some of the major companies in the solved-based recycling market include Proctor & Gamble, APK AG, and Fraunhofer.

What are the factors driving the solvent-based plastic recycling market?

b. Growing consumption of plastics has resulted in growing plastic waste which because of improper plastic waste management has become a global crisis. Solvent-based recycling of plastic waste is one of the innovative ways to solve this crisis. To remove impurities a selective solvent dissolution process is used to recover plastics of minimum standards suitable for reuse.