The global succinic acid market size was estimated at 47.5 kilo tons in 2014. Improving construction and infrastructure in emerging economies of Asia Pacific are expected to trigger demand for resin, coating, and polyurethanes, which in turn is expected to drive industry growth.

The product is used as a building block for the production of polyurethanes, resins, polybutylene succinate (PBS) and plasticizers, as well as a precursor for chemicals such as 1,4 butanediol (BDO). However, crude oil price volatility will affect prices for the product, thus restricting demand. In addition, strong growth in production of bio-succinic acid due to rise in popularity of green products among chemical manufacturers is expected to challenge demand over the next seven years. 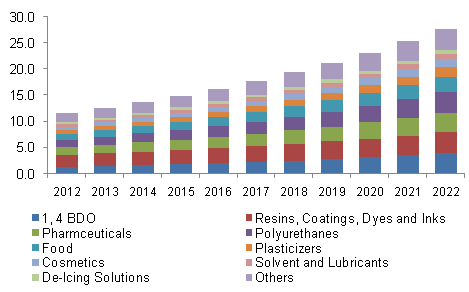 Resins, coatings, dyes, and inks form the largest application segment accounting for over 9.0 kilo tons of the global market in 2014. Rising demand from construction and the automotive industry is expected to fuel growth over the forecast period. Improving infrastructure owing to increased government spending in the U.S., India, and China is expected to drive demand for resins, coatings, dyes, and inks over the forecast period thus fueling succinic acid market growth.

Pharmaceuticals were the second largest application segment valued at USD 14.9 million in 2014. Increasing medical tourism in India on account of advanced healthcare facilities coupled with cheap labor is expected to result in high pharmaceutical products need over the forecast period. This in turn will have a positive impact on the product over the next seven years

1,4 butanediol was the fastest growing application segment at a CAGR of over 12.3% in terms of revenue from 2015 to 2022. 1,4 BDO is used in the production of tetrahydrofuran, polybutylene terephthalate, polyurethane elastomers, and gamma-butyrolactone. Increasing need for high performance elastomers, solvents in PVC production, cements, and coatings is expected to propel 1, 4 BDO market over the forecast period.

Europe dominated the market accounting for over 30.0% of global volume share in 2014. However, the region is expected to witness stagnant demand on account of the introduction of the bio-based product as a replacement. The stringent regulatory scenario in the European Union owing to the implementation of REACH legislation is expected to favor bio-based substitutes over the forecast period.

Asia Pacific market was valued over USD 36.0 million in 2014. The region is expected to witness high demand for the product on account of the relaxed regulatory environment in countries including India and China. Rising need for applications such as 1,4 BDO, polyurethanes, cosmetics, plasticizers, food, and pharmaceuticals is expected to propel growth over the next seven years.

In August 2015, BioAmber in cooperation with Mitsui & Co., Ltd. announced the opening of its succinic acid plant in Sarnia with a capacity of 30,000 tons. Through this, the companies aim to cater to the rising needs for renewable building block chemicals in global markets. In January 2014, BioAmber announced the start of a new manufacturing plant to produce bio-based BDO with an annual capacity of 100,000 tons in North America by signing take-or-pay agreement with Vinmar for land purchase.