The global toys and games market size was valued at USD 291.72 billion in 2021 and is anticipated to expand at a compound annual growth rate (CAGR) of 4.7% from 2022 to 2030. The industry is expanding due to various factors, such as parents’ increased interest in green toys, the resurgence of conventional toys & video games, awareness of the cognitive benefits of building toys, and the exponential expansion of mobile-based gaming. The market is also expected to be driven by the increased popularity of traditional recreational activities among younger generations. Millennials’ growing predilection for old-school games at social gatherings is likely to propel the market growth over the forecast period. 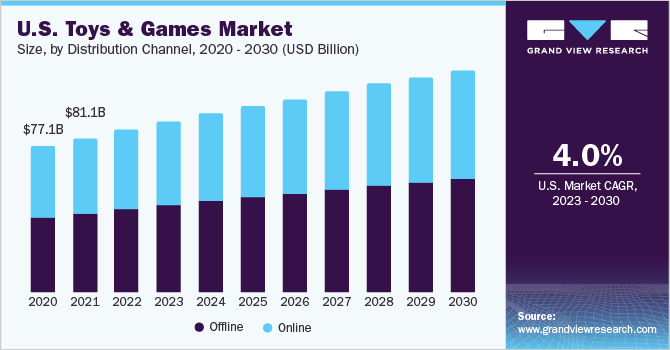 Companies are actively shifting their product offerings by launching e-stores and retailing products through e-commerce platforms, such as Amazon, Walmart Online, and eBay, among other regional platforms, as online platforms have emerged as a viable and cost-effective alternative to physical marketing and sales. People stayed at home owing to the lockdown and looked for indoor games online. Curtis McGill and Scott Houdashell’s toy companies’ Amazon sales increased by 4,000% year over year in March 2020, while their Walmart in-store sales increased by 100%. In addition, Ravensburger, a puzzle maker, witnessed a surge in sales in March 2020. According to a business representative, sales of puzzles in the United States increased by 370% year over year in the last two weeks of March 2020, and sales were ten times greater than the same day in 2019.

On the basis of applications, the global market has been divided into up to 8 years, 9 to 15 years, and 15 years & above. The 15 years and above segment recorded the largest market share of 49.65% during the forecast period from 2022 to 2030. This segment is mainly driven by the emergence of the ‘kidult’ section in the toys & games industry. In the U.K., the adult and teen category now represents 27% of the total toy sales as of 2020, up by 16% since 2016, according to ToyNews Media. In 2020, with more time on their hands, kidults completed complex building set kits, played more games, and entertained themselves with puzzles.

As this group tends to purchase higher-priced toys, their buying power helped increase the average sales price of toys overall. More than half of the kidult market is made up of millennials, with 18 to 34 year-olds looking at toys and characters from their childhood as a form of escapism and a reflection of simpler times. For instance, in June 2021, Lego announced that adult superfans will be able to hold virtual meetings with set creators and pore over early product designs and prototypes at “storytelling tables” in its stores.

The online distribution channel segment is estimated to record the fastest CAGR of 4.8% during the forecast period. Aggregators and manufacturer-hosted e-commerce websites are part of the online segment. Manufacturers have recognized the channel’s potential and are hosting shopping websites to better serve customer demands while increasing profit margins. To accommodate the increased demand for e-commerce, companies, such as Hasbro and Mattel, extended their direct-to-consumer businesses. Similarly, FAO Schwarz and Hamley’s of London, two toy industry veterans, are also pursuing digital opportunities. With an eBay shop, Hamley’s of London increased its online footprint, giving its whole variety of toys and games to eBay’s 28 million U.K. users.

In most parts of the world, e-commerce outlets have been the only route out for any kind of purchase due to stay-at-home orders and schools being closed for about a year and a half due to COVID-19. Innovative toys and activities have become the latest method to pass the time as children spend more time indoors and at home. Moreover, manufacturers have been developing and launching different or original versions of games available to play online. For example, Monopoly, in 2020, launched a new gaming mode online where the conventional gaming terminologies are given COVID-19 terms. In addition, the Chance and Community chest cards include cards that state whether a player has tested positive or negative for COVID-19.

In terms of value, electronic games dominated the market with the largest revenue share of 63.87% in 2021. Consumer spending on video content, Virtual Reality (VR) items, and video game tournaments have increased significantly with technological advances. Due to reasons, such as the proliferation of mobile and online gaming, as well as the move from physical to digital software distribution, the market is seeing exponential growth. Many toymakers invested heavily in content production centered around their flagship products, used the content as lead generators, and created interactive play experiences to add value to their physical products as a result of the shift from products to a more service-oriented model that has transformed many industries. 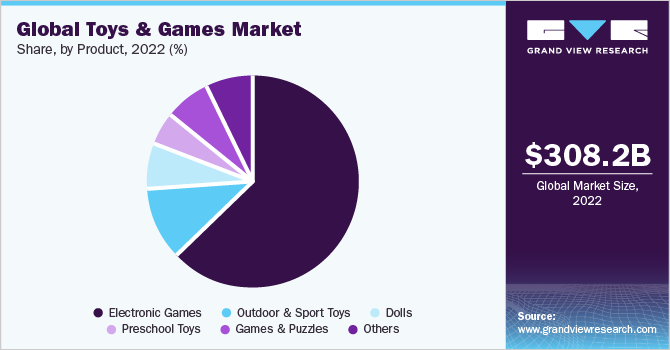 According to NDP, the popularity of board games has resulted in a 48% increase in sales year to date (2021). Board games have seen a renaissance at home, from chess to Chutes and Ladders and Exploding Kittens. Moreover, the launch of a large number of innovative and unique puzzles has also been playing a crucial role in the growth of the segment. In January 2021, Theory11, in collaboration with Star Wars, launched ‘The Mandalorian’ playing cards. The premium deck features custom artwork on each card, illustrating Aces, Jokers, and court cards with characters from the show, like Mando, Baby Yoda, IG-11, Moff Gideon, and Cara Dune. In addition, cloud gaming is a new trend that is giving tough competition to the traditional gaming market. Recent developments in improved cloud technology have transformed the concept of cloud gaming. For instance, in May 2021, a French video game company, Ubisoft, confirmed that Far Cry 6, a first-person shooter game, was globally released in October 2021. The games and puzzle segment is projected to register the highest CAGR during the forecast period. Board games had a devoted following even before the pandemic, with roughly a thousand board game cafes springing up around the world.

In 2021, Asia Pacific accounted for the largest revenue share of more than 41.1%. Due to the general increased awareness of branded and licensed games and toys in the region, Asia Pacific is one of the most lucrative markets. In addition, the big regional population is a primary driver for this market. According to the United Nations’ “World Population Prospects 2019,” Asia’s population will increase from 4,326 million to 4,654 million by 2030, except in Western Asia. Because of these considerations, Asia Pacific is a promising future market for toy and game manufacturers.

Moreover, companies have expanded their reach to developing countries in this region, such as China and Japan, through improved e-commerce or opening up stores in new locations. For instance, Lego launched 134 retail sites in 2020, including 91 of them in China. There are currently 678 Lego-branded stores around the world and the company plans to open 120 more, including 80 in China. Their goal is to establish roughly 300 Lego stores in China by the end of the year 2021.

The market includes both international and domestic participants. Key market players focus on strategies, such as mergers & acquisitions, innovation, and new product launches, to enhance their market share. For instance, in April 2021, VTech completed the acquisition of QSC, LLC’s production facility in Tecate, Mexico for manufacturing wood enclosure loudspeakers. In February 2021, LEGO announced its decision toâ€¯bring SEGA’s legendary speedster, Sonic the Hedgehog, to brick form. The concept was submitted by a 24-year-old fan from the U.K. In August 2020, LEGO entered a product partnership with brands like IKEA, Levi’s, Universal Pictures, and Universal Music Group. LEGO will convey stories and create a unique experience with Universal Pictures and Universal Music Group. Some of the key players operating in the global toys and games market include:

This report forecasts revenue growth at global, regional, and country levels and provides an analysis of the latest industry trends in each of the sub-segments from 2017 to 2030. For the purpose of this study, Grand View Research has segmented the global toys & games market report on the basis of product, application, distribution channel, and region:

How big is the toys and games market?

What is the toys and games market growth?

Which segment accounted for the largest toys and games market share?

b. The offline distribution channel dominated the global toys and games market with a share of 51.57% in 2020. This is attributable to the increase in product visibility at physical stores and flexible working hours where supermarkets or hypermarkets thereby ensuring maximum access.

Who are the key players in the toys and games market?

What are the factors driving the toys and games market?

b. Key factors that are driving the toys and games market growth include increasing launch of educational games, commercialization of favorite movies and cartoon characters, and an increasing number of video game tournaments and spending on video games.