The U.S. frozen desserts market size was valued at USD 52.82 billion in 2020 and is expected to expand at a compound annual growth rate (CAGR) of 5.7% from 2021 to 2028. The U.S. market for frozen desserts is driven by the rising demand for low-sugar and low-calorie desserts domestically. Consumers are becoming increasingly concerned about their health but also crave to try out new delicacies. Rising consumer spending on these desserts and the development of new products have been the key driving factors for the industry’s growth in the past few years. With the shift in trend from desserts such as ice cream post-dinner or lunch toward frozen desserts, these desserts have paved their way into the market, replacing traditional desserts with a lower shelf life. 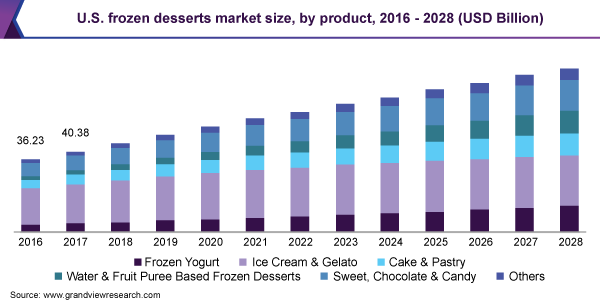 Top companies in the U.S. dealing in frozen desserts have built up a robust and loyal customer base. These companies keep expanding their product portfolio to fulfill the ever-increasing demand. Chocolate and vanilla are the most preferred flavors in the U.S. market. Apart from these two flavors, there is an increasing trend of cappuccino, rooibos tea, mocha, punch, cocoa, and tropical flavors.

Several companies in the U.S. are investing extensively to improve the shelf life and the storage facilities of these products, which, in turn, is estimated to positively influence the industry growth over the forecast period. Numerous manufacturers are increasingly spending on researching and developing new variants of frozen desserts to gain a competitive advantage over existing multinationals and attract a more extensive customer base.

Constant product launches with innovation have been playing a crucial role in the market growth and penetration. In August 2018, FroYo Xpress opened its self-service kiosk for frozen yogurt. The startup offers dairy-free frozen dessert in two flavors and three different toppings.  The startup is focused on healthy dessert options. It has also partnered with retailers to maintain day-to-day operations, whereas the startup is dedicated to providing kiosks, supplies, and regional support. The kiosk helps in delivering feedback about the satisfaction of customers and retailers.

The ice cream and gelato segment held the largest share of more than 40.0% in 2020. The penetration of the product is extensive. In August 2017, SpaceX Dragon was rocketed to the International Space Station, which, along with other stuff, also carried ice cream. The capsule has an extra freezer space with mini cups of vanilla, chocolate, and birthday cake ice cream. It also has ice cream candy bars.

The water and fruit puree based frozen desserts segment is anticipated to be the fastest-growing segment with a CAGR of 13.0% from 2021 to 2028. The category includes shave ice, ice pops, sorbet, snow cones, water ices, and popsicles. The growing popularity of the category has led to an increasing number of companies entering the business arena. In September 2017, BluDog Products LLC and Pop Craft launched CBD Popsicles in three flavors, including Mexican Chocolate “Wall”, Tangerine, and Mixed Berry.

The gas stations and convenience stores segment held the largest share of more than 20.0% in 2020. The presence of these stores at convenient and accessible locations is the major factor contributing to the segment growth. These stores help consumers make quick purchase decisions and offer a moderate range of product choices. They tend to operate 24/7 and have a presence in almost every small town in the U.S. Some of the popular convenience stores for frozen dessert products in the U.S. are 7-Eleven Inc.; Alimentation Couche-Tad Inc.; and Casey’s General Stores, Inc.

The online and D2C segment is anticipated to be the fastest-growing distribution channel with a CAGR of 7.3% from 2021 to 2028. COVID-19 has provided a boost to the distribution channel. During July 2020, when most eateries across the globe went on lockdown, most manufacturers in order to keep up their sales began offering direct-to-customer delivery. For instance, Unilever began accepting orders for Ben & Jerry’s tubs through its delivery channel, Unilever’s Ice Cream Now. The company has been building up partnerships with Domino’s Pizza and Deliveroo to form a strong e-commerce network.

The dairy segment accounted for the largest share of more than 80.0% in 2020. The category enjoys broad penetration owing to the first-mover advantage. The earliest forms of frozen desserts have all been dairy-based. In January 2021, Unilever launched 25 new frozen desserts under its various brands, such as Breyers, Good Humor, Klondike, Magnum, Popsicle, and Talenti. The products include ice cream bars and tubs, fudges, cakes, bars, and gelatos, which are available in flavors including mango, strawberry, vanilla, red velvet, truffle, coffee, coconut, and chocolate. 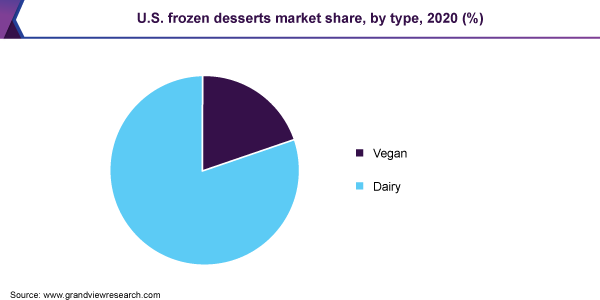 The vegan segment is anticipated to be the fastest-growing segment with a CAGR of 11.3% from 2021 to 2028. The rising adoption of veganism is a major factor contributing to the massive growth of the segment. The growing awareness regarding the health consequences of consuming animal products, along with its ethical and environmental impact, has been propelling the movement. Thus, a large number of conventional frozen dessert manufacturers are making a move into the segment.

The U.S. market is consolidated in nature and is characterized by the presence of various well-established players and several small and medium players. Major players in the market are adopting a number of strategies, including mergers & acquisitions, collaborations, product launches, and expansion of distribution channels, in order to capture the major market share and expand their customer base across the globe. The market has a large number of regional and several international players. Market players face intense competition, especially from the top players in the frozen dessert market, as they have a large consumer base, strong brand recognition, and vast distribution networks. Some prominent players in the U.S. frozen desserts market include:

This report forecasts revenue growth at the country level and provides an analysis of the latest industry trends and opportunities in each of the sub-segments from 2016 to 2028. For the purpose of this study, Grand View Research has segmented the U.S. frozen desserts market report on the basis of product, type, and distribution channel:

How big is the U.S. frozen desserts market?

What is the U.S. frozen desserts market growth?

b. Dairy frozen dessert dominated the U.S. market with a share of 80.2% in 2020. This is attributed to the wide penetration of dairy products owing to their first-mover advantage.

Who are the key players in U.S. frozen desserts market?

What are the factors driving the U.S. frozen desserts market?

b. The key factor that is driving the U.S. frozen desserts market growth includes rising demand for low-sugar and low-calorie desserts on a domestic level, increasing spending among consumers towards trying out new delicacies, and new product launches.