The U.S. trona market size was valued at USD 1.33 billion in 2019 and it is expected to register a CAGR of 1.7% from 2020 to 2025. The market is anticipated to be driven by increasing demand for trona from animal feed, air pollution control, and soda ash industries. Trona is primarily used to manufacture soda ash, by heating it to a very high temperature and converting it to sodium bicarbonate. Soda ash is used as a raw material in detergents, textiles, and glass. Thus, a rise in the demand for soda ash is among the primary factors driving the market growth. 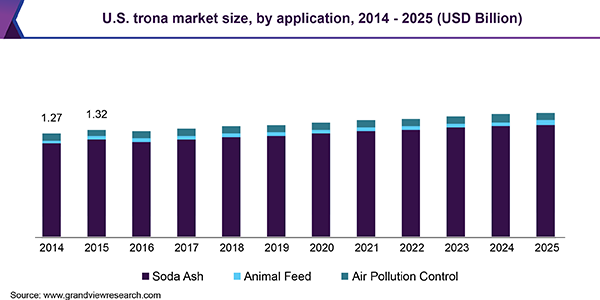 The market is strengthened by the availability of huge bedded and interbedded trona deposits situated in the Green River Basin of Wyoming. Most of the trona in the region is mined through conventional continuous as well as room and pillar mining methods. The companies engaged in the mining business are focused on improving the mining technique solutions to increase product recovery.

Such components are additional waste, which is discharged into waterways leading to water pollution. This is likely to contribute to the demand for natural soda ash as well as trona. U.S. trona miners are running at full utilization due to substantial demand for natural soda ash across the globe. Trona mined in the U.S. has a lower (nearly 36%) Greenhouse Gas (GHG) footprint than Chinese synthetic soda ash. This is expected to drive trona mining in the U.S.

Currently, the supply situation is likely to remain tight worldwide, and producers in the U.S. are focusing on tapping the export opportunities at attractive pricing. Top three trona producers in the U.S. separately sought price increases of USD 6 per ton. A severance tax on minerals in the state of Wyoming is likely to contribute further in the industry growth and in the economic development of the U.S. However, rising export competition from China along with increasing production capacity in Turkey is projected to remain a key challenge for the existing suppliers.

The U.S. trona market is expected to witness significant growth over the forecast period owing to rising demand for animal feed in the country. Trona is used in animal feed as a rumen buffer for dairy cows. It is observed that trona-enhanced feed program to cattle enhances their milk productivity in terms of quality. Also, by adding trona or sodium sesquicarbonate (as a rumen buffer) to cow feed, cows in their late lactation portray increased diet intake.

Soda ash production is the largest application of trona. When heated at temperatures above 800 degree Celsius, in combination with calcium carbonate and sand and then instantly cooled, the result is soft soda glass. Soda is manufactured in two forms, high density and low density.

While heavy soda is widely used in the glass industry, light soda light soda is used in the production of chemicals and detergents. Unlike synthetic soda ash, natural soda ash is void of liquid pollutants such as chlorides and other solids. Soda ash is mostly used by the glass, chemicals, soap & detergents, flue gas desulfurization (FGD), pulp & paper and water treatment industries.
Soda ash plays a vital role in animal feed for nutrition, the product is used as a diary base cow feed supplement. The product is also preferred as an alternative for salt in poultry food owing to its ability to manage litter while providing healthier living ambience.

Trona is also used in animal feed as dietary buffers for mitigating the metabolic disorders linked with high concentration diets. The inclusion of such a product in the proper feed program of cattle has proved to increase the quality and production of milk. Rising use of trona as a rumen buffer for dairy cows is projected to augment the product demand in the animal feed application segment.

Trona is used in various industries, such as waste incineration, cement production, gold, and another precious metal refining, and coal-fired electric power generation to effectively remove acid gases including oxides of Sulphur (SO2 and SO3), Hydrofluoric acid (HF), and Hydrochloric acid (HCL) from flue gas emission.

Glass manufacturing emerged as the largest end-use industry. In the U.S., more than half of the soda ash produced from trona is used in glass manufacturing. Increasing demand for glass from major industries, such as construction and automotive, is estimated to drive the market. Robust growth of the glass container manufacturing industry is also likely to further contribute to the U.S. trona market. Product demand in the steel industry is likely to increase on account of wide usage of soda ash as de-phosphorizer, dentrider, de-sulfurizer, and flux. 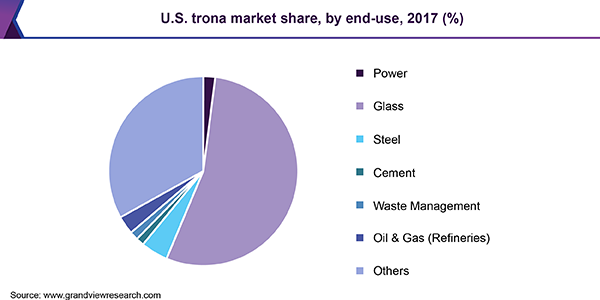 Its typical usage in blast furnace includes the removal of sulfur from iron ore. Soda ash also provides fluidity to slag, which enables the blast furnace to operate continuously without aberration and flaws. Furthermore, it also helps reduce the operational and manufacturing costs of steel manufacturing. Soda ash also has a high demand for waste management applications. It is widely used in the treatment of gaseous and aqueous emissions.

Rising industrial activities across the country along with the low cost of the product than other alternatives for waste management are expected to propel the segment development further. Dry and wet scrubbing systems are the types of technologies used in air pollution control. Comparing both the systems, the dry scrubbing system has advantages regarding the installation costs, ease of retrofit, and maintenance complexity.

The U.S. is expected to grow at a compound annual growth rate of 1.7% from 2018 to 2025 owing to the upward shift in demand for products from industries such as the chemical, oil & gas, and glass sector. The cement industry emerged as a steady consumer of trona in owing to its utilization in cement kilns as well as to controlling cement contamination.

Cement industry in the U.S. is witnessing growth in demand over the past few years owing to the increasing investment in construction activities across the country. The cement industry is regulated under various standards such as National Emission Standards for Hazardous Air Pollutants from Portland Cement Manufacturing Industry (PC MACT), Commercial and Industrial Solid Waste Incinerator (CISWI), New Source Performance Standards, Boiler MACT, etc.

Increasing industrial activities across the region along with the suitability and comparatively low cost of soda ash in comparison to other available alternatives are likely to develop the product demand across the country. Currently, China and India are two major competitors for the U.S. in production of synthetic soda ash from natural trona.

The market competition is based on several factors, such as favorable logistics, consistent customer service, and prices. Manufacturers are focused on developing mining and processing techniques for cost-effective production and recovery of the minerals. American Natural Soda Ash Corporation (ANSAC) holds great significance in the industry. Being a non-profit foreign sales association, it supports its members for the sale and export of the mined products.

This report forecasts revenue growth at the country level and provides an analysis of the latest industry trends in each of the sub-segments from 2014 to 2025. For this study, Grand View Research has segmented the U.S. trona market report based on application, end-use, and state:

How big is the U.S. trona market?

What is the U.S. trona market growth?

Which segment accounted for the largest U.S. trona market share?

b. Soda ash dominated the U.S. trona market with a share of 90% in 2019. This is attributable to chemical industry growth along with expansion of soda ash production facilities.

Who are the key players in U.S. trona market?

What are the factors driving the U.S. trona market?

b. Key factors that are driving the market growth include rising need for flue-gas desulfurization (FGD) systems and demand from various countries for the purest form of natural soda ash.