The global vaccine delivery devices market size was valued at USD 3.33 billion in 2016 and is projected to grow at a CAGR of 7.3% during the forecast period. Growing immunization programs & their increasing coverage, growing research in the field of vaccination, increasing government support and investment, development of novel vaccines, and various campaigns & initiatives are some of the key factors that can be attributed to the growth of the market.

Immunization coverage is expanding with financial support from international organizations such as GAVI Alliance, Bill & Melinda Gates Foundation, Path, and others. More vaccines including those for life-threatening diseases are being increasingly available to the population. In developing nations, innovative funding mechanisms are implemented to increase vaccination coverage and provide new vaccines. In June 2017, Global Alliance for Vaccines and Immunizations (GAVI) extended its support for the introduction of Inactivated Polio Vaccine (IPV) till 2020 in low- and middle-income countries. This will make the vaccine available to millions of children via the routine immunization program aimed at eradicating polio.

Increasing research and investment for the development of vaccines is also one of the key drivers of vaccine delivery devices market growth. Canadian Institutes of Health Research Institute of Infection and Immunity supports & funds research activities aimed at reducing the burden of infectious diseases, allergies, and immune-mediated diseases. The institute invests around USD 1 million per year to support research of hepatitis C, USD 45.7 million through partnerships for pandemic influenza research, and USD 22.5 million to support the CIHR HIV/AIDS Research Initiative.

Furthermore, technological advancements for the efficient delivery of vaccines are expected to propel market growth. Need for needle-free delivery of these products has risen owing to needle stick injuries, risk of infections due to reuse of needles, and transmission of blood-borne infections due to improper sterilization of needles. Growing interest of key players and various international organizations & institutions in novel delivery technologies such as jet injectors, microneedles, and others is also expected to drive market growth in the future. In 2015, the Centers for Disease Control and Prevention reported that it is developing a new microneedle patch along with the Georgia Institute of Technology for vaccination against measles and few other vaccine-preventable diseases.

In 2016, the syringes segment held the largest chunk of the market. Syringes are most commonly used to administer vaccines. They are largely used in routine immunization and mass vaccination programs as they are inexpensive and effective. Novel and technologically advanced syringes such as auto-disposable syringes and prefilled syringes are gaining popularity.

However, many people have a phobia of needles used in syringes because of the pain caused by them. Improper sterilization of needles and their reuse increases the risk of various infections. Thus, auto-disable syringes, which are safe and meant for single-use, are being widely used in immunization campaigns. Adoption of prefilled syringes is also increasing due to various advantages associated with their usage such as operational efficiency, minimized vaccine wastage, and improved patient safety.

The jet injectors segment is projected to grow at the fastest rate with a CAGR of 9.4% during the forecast period. Jet injectors eliminate the need for a needle, thus making the procedure painless. Growing preference for needle-free devices, increasing investments in new technologies, and rising focus of key players in this technology are expected to contribute to the growth of the market in the upcoming years.

In 2016, the intramuscular segment held majority of the share accounting for about 70%. Majority of vaccines are administered through the intramuscular route. Delivery through this route reduces adverse reactions at the injection site. Intramuscular injections are widely adopted because they deliver medications deep inside muscle tissues, which results in quick absorption.

Intradermal vaccination is projected to be the fastest-growing during the forecast period. This route of vaccine delivery has attracted interest in the past few years owing to benefits such as dose sparing, improved safety, and improved access to vaccines. These factors are expected to contribute to the growth of this segment over the following years. Furthermore, an increase in studies of alternative methods for intradermal administration with novel devices such as jet injectors, microneedles, and others is anticipated to drive the growth of this segment. 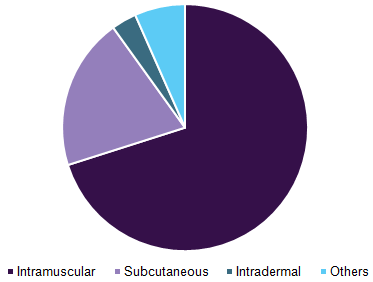 North America dominated the market in 2016 with a revenue share of around 38.5%. Growing immunization coverage, increasing investments in R&D for new vaccines, and high prevalence of infectious diseases are key contributors to the growth of the market. In addition, sophisticated healthcare infrastructure and high awareness amongst the public as well as healthcare professionals has also contributed to the large share of the market.

Asia Pacific is expected to register the fastest growth over the next few years owing to a large patient pool, growing target population, high unmet needs, and improving infrastructure in the region. Unhealthy lifestyle and growth in aging population who are susceptible to infectious diseases are leading to increased occurrence of diseases.

Many governments worldwide are increasing their spending on vaccination and demonstrating strong & effective leadership and ownership of immunization programs. Vaccine-preventable diseases are amongst the major contributors for illness and long-term disabilities in developing nations. However, increasing funding, emerging vaccine manufacturers in developing regions, presence of key players, and increasing efforts to promote the use of vaccines in middle- and low-income countries is expected to drive growth in developing nations.

This report forecasts revenue growth and provides an analysis of the industry trends in each of the sub-segments from 2014 to 2025. For the purpose of this study, Grand View Research has segmented the global vaccine delivery devices market on the basis of devices, route of administration, and region:

The outbreak of Covid-19 has surged the clinical development of vaccines to manage the pandemic effectively. The market is expected to gain momentum due to a sudden surge in R&D expenses by pharma and biotech companies for product development and innovation. Intensive research has also led to the acceleration of preclinical trials of the intranasal Covid-19 vaccine. Thus, a higher focus on device innovation to eliminate the risk of disease transmission and needle stick injuries is expected to propel the market. The updated report will account for Covid-19 as a key market contributor.