The global veterinary dental equipment market size was estimated at USD 324.1 million in 2018 and is expected to witness a CAGR of 7.7% during the forecast period, driven primarily by the increasing prevalence of periodontal diseases. According to the Animal Medical Center of Wyoming, periodontal disease affects nearly 70% of cats and 87% of dogs over 3 years of age.

Periodontal diseases include periodontitis and gingivitis. Increasing awareness among pet owners about the maintenance of pet oral hygiene is anticipated to help improve the adoption of dental equipment over the coming years. Increased pet ownership is another factor propelling growth. 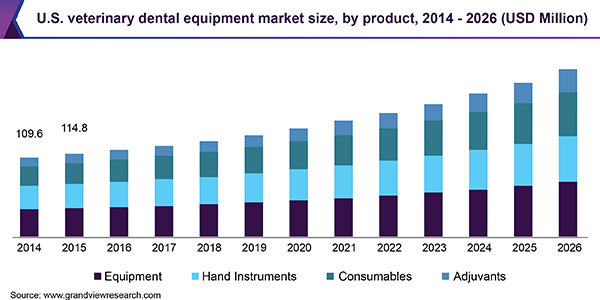 An increase in favorable government initiatives and reimbursement policies are other key factors aiding growth. The average claim for pet teeth cleaning in 2014 was USD 170 and that for other dental diseases was USD 221. According to an APPA report, the average spend on the dental health of dogs in the U.S. was around USD 49.70, as of 2018.

An increasing number of veterinary surgeries are driving the market further. For instance, according to a report by AVMA, USD 15.42 billion was spent on veterinary surgeries in 2017 by pet owners in the U.S. More than 80% of the mature and geriatric pet population has been found to have periodontal disease, which eventually results in surgery. Moreover, growing disposable income in developing countries such as China & India is further aiding growth, due to untapped opportunities.

The veterinary dental equipment market is segmented into hand instruments, equipment, consumables, and adjuvants. Equipment held the largest revenue share in 2018. The segment is further divided into dental x-ray systems, electrosurgical units, stations, lasers, and powered units. X-ray systems expected to show significant growth over the forecast period, owing to associated advantages in oral examination and increasing adoption by veterinary practitioners. It helps visualize 50% of the tooth below the gum, which enables the provision of better treatment options.

On the basis of animal type, the market is segmented into large and small animals. Small animals include canines & felines and this segment is expected to witness lucrative growth over the forecast period, owing to increasing pet ownership & growing expenditure on companion care. According to the Humane Society of the United States’ reports, around 61.3 million U.S. households had at least one pet dog in 2017. Increasing prevalence of the periodontal disease in pets is driving the market. Early detection and treatment are important as they help prevent the conditions from progressing, which may cause pain or chronic health issues.

Large animals held the leading revenue share in 2018. Dental problems are a very common underlying cause of poor breeding, loss of condition, and low nursing performance. A routine dental prophylaxis is required to maintain good health. Early recognition is ideal for optimal treatment, even though it can be very difficult to identify from only outward signs. According to data from the Academy of Veterinary Dentistry/Equine, around 34% of horses of all ages have some level of periodontal problems and around 13% suffer from severe periodontal disease.

On the basis of end-use, the market is segmented into hospitals & clinics and others. Hospitals & clinics held the highest revenue share during the forecast period and are likely to garner half of the overall revenue share by the end of 2026. This can be attributed to the presence of a wide range of services and skilled professionals. An increase in the number of veterinary dental clinics is expected to propel the market over the forecast period. 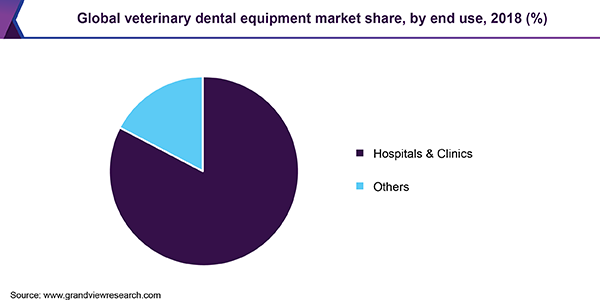 The others segment includes research institutes and various animal care centers. This segment is expected to witness significant growth over the forecast period, owing to increasing research initiatives to develop better treatment options. Some investments are also made to enhance diagnostic procedures through the development of next-generation technologies, especially for companion animals.

North America accounted for the largest revenue share in 2018, owing to favorable healthcare infrastructure and increasing government initiatives. Efforts by key players to improve their products and ensure high-quality standards are projected to boost demand for veterinary dental equipment products across this region.

Moreover, increasing pet ownership and out-of-pocket spending by pet owners is anticipated to fuel growth over the forecast period. Increasing demand for pet insurance and claim are likely to result in demand for better treatment options. According to a NAPHIA report, the total number of insured pets in the U.S. and Canada reached over 2 million in 2018, and the market average increased by 17% over the previous year.

Asia Pacific is expected to experience lucrative growth over the forecast period, owing to increased disposable income and acceptance of pet animals. This is more common to emerging economies of countries such as China and India, which led to a rapid expansion of manufacturing facilities in these countries. Increasing R&D investment by key players and pharmaceutical companies for the development of this market to produce value-added products is anticipated to drive growth in the region.

The industry is marked by the presence of various small and large companies and is competitive. Some dominant players include Im3 Pty Ltd, Dentalaire, Midmark Corporation, and Henry Schein.

These players are involved in ongoing strategic initiatives, such as new product launch, technological advancements, and mergers & acquisitions, to improve their standing. For instance, in 2015, Henry Schein acquired Jorgen Kruuse A/S and SCIL to increase its revenue share in veterinary dental space. In 2018, Dispomed launched Highdent Quattro Plus, a dental unit, to improve its product portfolio. In 2018, Eickemeyer signed an agreement with Central CPD to connect with vet practitioners through professional training programs and educate them on latest medical equipment.

This report forecasts revenue growth at global, regional, & country levels and provides an analysis of the latest industry trends in each of the sub-segments from 2014 to 2026. For the purpose of this study, Grand View Research has segmented the global veterinary dental equipment market report on the basis of product, animal type, end use, and region: